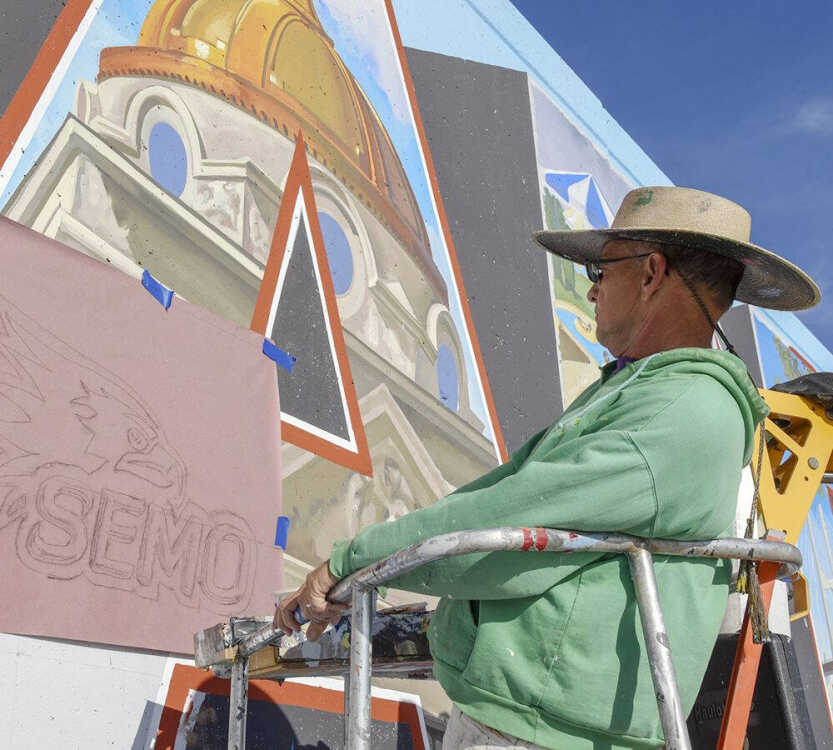 Head artist Craig Thomas leans back to view the placement of the stencil while creating the new mural on the river wall Oct. 19 in Cape Girardeau.
Sarah Yenesel ~ Southeast Missourian, file

The downtown Cape Girardeau floodwall has for years served a very practical purpose in protecting the city from the rising waters of the mighty Mississippi River. We've written about its importance in this space before from a practical perspective. But the wall has also served an aesthetic and historical purpose, with another chapter written — or, shall we say painted — recently by respected artist Craig Thomas and team.

On the side facing the river, there is now an updated mural welcoming travelers to our city in big bubble letters. Each of the letters depicts an image of an event or location representative of Cape Girardeau. There's the SEMO District Fair, the downtown clock, Trail of Tears and our hospitals, among other images. It's a delightful piece of art. It replaced another mural that served our city well for 30-plus years but because of rising waters and fading colors from the sun had seen better days.

"I had high expectations, but [Thomas] exceeded my expectations nonetheless. This thing is absolutely spectacular. ... We once again have a riverfront and a riverfront mural that we can all be proud of," Old Town Cape board president Danny Essner said at the mural's unveiling ceremony.

Southeast Missourian photojournalist Sarah Yenesel took several photos of the new mural late last month for a photo essay that appeared in the newspaper and online here. The drone image was especially captivating of the project's scope. Still, if you haven't been downtown to see the new mural in person we encourage you to do so.

Hats off to all those involved in the project — donors, organizers and artists. This will be a special part of the riverwalk for years to come.