Success stories and photos of babies treated over the years are sent to Saint Francis Medical Center regularly, though many of their earlier patients don't look much like babies anymore. Graduation photos and life updates are becoming more common. It is one of many examples of how the Medical Center's Neonatal Intensive Care Unit (NICU) makes lifelong connections with its patients and their families.

On September 10, the Medical Center will celebrate the NICU's 20th anniversary. Recently, medical personnel with the Saint Francis NICU spoke with the Southeast Missourian about why the unit matters for the region.

The Saint Francis NICU is the first and only Level III NICU in Southeast Missouri, according to the hospital's website.

With three board certified, fellowship trained Neonatologists who have dedicated their lives to the care and keeping of children, Saint Francis is fully prepared to care for premature and critically ill newborns.

April Bond, BSN, RN, CLC, discharge coordinator, said the NICU has received an average of 240 admissions per year over the last 20 years. 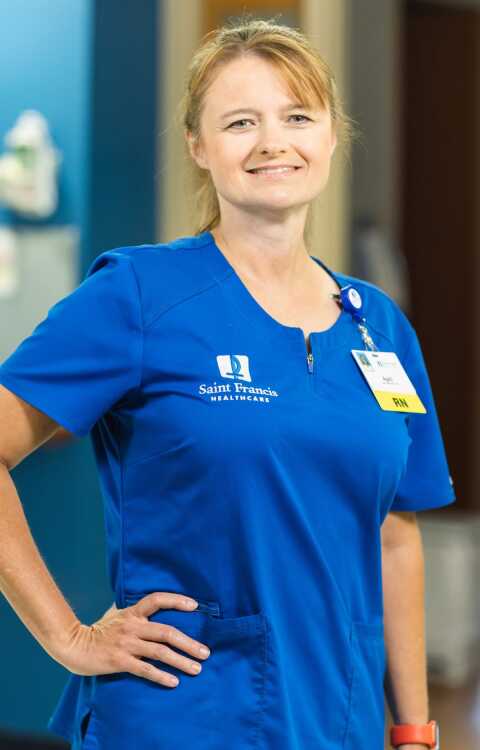 "We really want parents to know we are here for them, not only during their NICU stay but after their stay," Bond said. "We want to be a resource for them and for the community. We want our babies in Southeast Missouri to have the best possible chance just like those born in bigger cities, and to receive exceptional care right here in our community. That's what we provide."

Bond said Saint Francis offers the only NICU Developmental Follow-Up Clinic between Memphis and St. Louis. As a result, some families travel a great distance to receive quality care.

A majority of the population the NICU serves has what Saint Francis neonatologist Karlyle Christian-Ritter, MD, FAAP, described as "negative social determinants of health -- poverty, underlying disease, unemployment and more," so for those families to safely travel to a big city for care is "nearly impossible."

Christian-Ritter said that distance is part of what makes the NICU in Cape Girardeau such a necessity because "when a baby is born who needs that level of care, literally, seconds matter."

"We have grown quite a bit in the last 20 years, and we have taken care of thousands of babies," Christian-Ritter said. "And I know in my heart of hearts there are children in Southeast Missouri alive today who would not be had it not been for the particular alignment of stars that got everybody exactly where they were supposed to be, when they were supposed to be for this NICU to happen -- it's quite miraculous."

Christian-Ritter said she still remembers receiving the call 20 years ago asking if she'd move to Cape Girardeau to help Saint Francis build a NICU. Her response: "We'll only do it if it's going to be done right," she recalled.

"In neonatology, you're not saving a life for 20 years; you're affecting decades of living. We're responsible not only for saving that baby's life today but getting them successfully to kindergarten, to their high school graduation and on. We wanted to have everything we needed to do that to the best of our ability," Christian-Ritter said. "And Saint Francis agreed if we were going to do this, we were going to do it top-notch from the get-go and not work our way into it."

Christian-Ritter said the hospital's NICU was born with what she referred to as their "fully equipped, state-of-the-art starter kit" -- a seven-bed NICU with equipment "to be able to take care of the tiniest babies," as well as a transport team.

The operation outgrew the seven-bed nursery "almost immediately," Christian-Ritter said. After it's first year, the NICU expanded to 15 beds and went through two more upgrades over time to become the state-of-the-art 36-bed unit seen today.

Bond said the current size of the NICU is just right -- small enough to form personal relationships with families, but still large enough to provide high-quality care to sick babies during their stay and after they leave.

"The relationship you build with these families, working with them so closely, sometimes for long periods of time, and teaching them how to care for their NICU babies and be successful at home, creates a bond that can never be broken," Bond said. "The relationship we share with them is like an extended family. We stay in touch with them when they leave, and it's just amazing getting to see the kids blossom and continue to care for them and their families."

Former NICU mother Leigh Ann Siener said it was that personalized level of care for her entire family and the bonds they formed during their 109-day stay for their twin boys, who start seventh grade this year, that put Saint Francis above and beyond.

"That personal relationship ... that is the missing piece in a lot of hospitals, and I felt like the Saint Francis in Cape Girardeau sees it as part of a holistic approach," Siener said. "Not only do they practice medicine, but they practice nurturing the well-being of the entire family. That changes everything for the outcome of your babies."