"So Nothing is Lost:" Robert Harris, Jr. gardens to help grow food, people and community 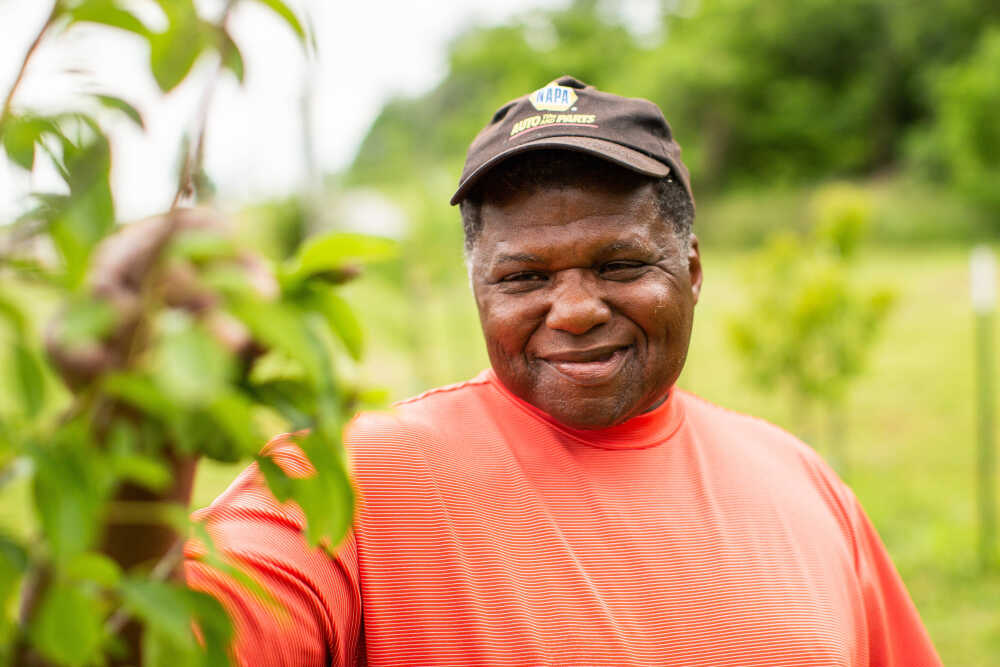 Robert Harris, Jr. is an artist, author, gardener and community organizer. "That'd make a nice meal for a mouse," he says as he examines a fledgling pear in the orchard at the Fountain Street Community Garden, a garden he and his mother started.
Photo by Aaron Eisenhauer

Robert Harris, Jr. is a Master Gardener. He knows that to reap a bountiful harvest, you first have to plant a small seed.

That’s just what he’s doing through the Urban Kid’s Project, a collection of projects he’s founded in Cape Girardeau and Scott Counties that seek to improve the lives of people who “can’t do for themselves.” Through the projects, he and the people he partners with bring food and care to the elderly who aren’t able to leave their homes, school supplies to children, community gardens to areas of Cape Girardeau that don’t have easy access to fresh produce, and more.

“We’re all here for a purpose. And I’ve realized my purpose,” Harris says. “I spent my younger life taking care of my father who was sick, and I spent a lot of years taking care of my mother. I’ve seen others who were sick, and you feel called. There’s something that with mine, it’s more of a divine purpose. It bothers me to see people without. It bothers me to see people who are not able to do for themself. There may be other things that would shake somebody else up that wouldn’t affect me that way. But this here, this is what [shakes me up].”

Harris grew up in rural areas throughout the Bootheel of Missouri, the son of farmers from Mississippi who moved to the region to escape boll weevils riddling cotton crops in the South during the Great Migration in the 1940s. Growing up in the countryside, he and his family had gardens. When they moved to Cape Girardeau, he saw a need for people to have access to food. “You kind of go back to your past,” he says, and so, with his knowledge of farming, he decided to do something about it.

Pursuing his love for raising plants, Harris became a Master Gardener in 1995. To help meet their neighbors’ need for healthy food, he and his mother, the late Bernice Harris who passed away April 25, started the community garden on South Fountain Street and continued to grow the project; at one point, they had seven community gardens they cared for together.

“I look and see people — a lot of good people live here. A lot of people have worked hard their whole lives,” Harris says. “If you can help them make things a little easier, this is what motivates me. This is what I love doing.” 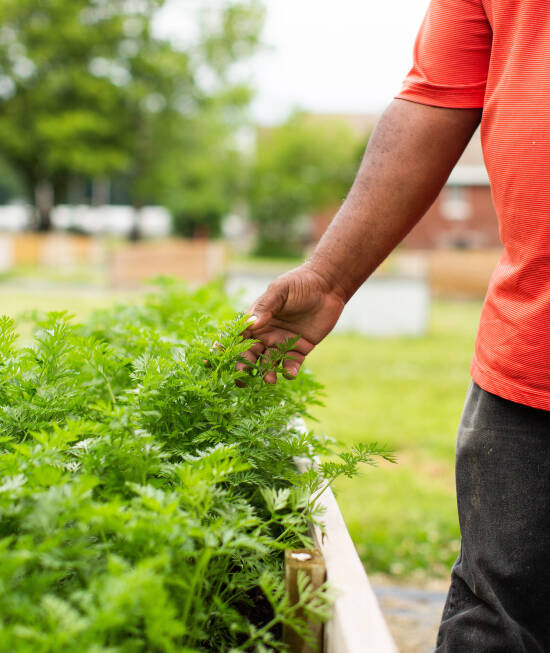 Robert Harris, Jr. touches a plant at the garden on South Fountain Street that he and his mother, the late Bernice Harris, started together. Harris continues their work to carry on her legacy.
Photo by Aaron Eisenhauer

To keep a record of the work he’s done, the people who have helped him and his dreams for the future of the project, Harris draws scenes from his life, writing about them on notebook paper he keeps in three-ring binders. Creating worlds through drawing, he says, was a way for him to cope with a speech impediment he had as a child, and he says writing is something he’s always done. The journals are a way for him to express his thoughts and feelings on paper and for others to be able to see his vision for the Urban Kid’s Project after he is gone, in order to continue his work.

The children’s book Harris has published, “A Garden for the Neighborhood,” which tells the story of his life as a bus driver and his work of starting the community gardens to help feed the people of his neighborhood through a main character named Mr. Mike, is available at the Arts Council of Southeast Missouri. 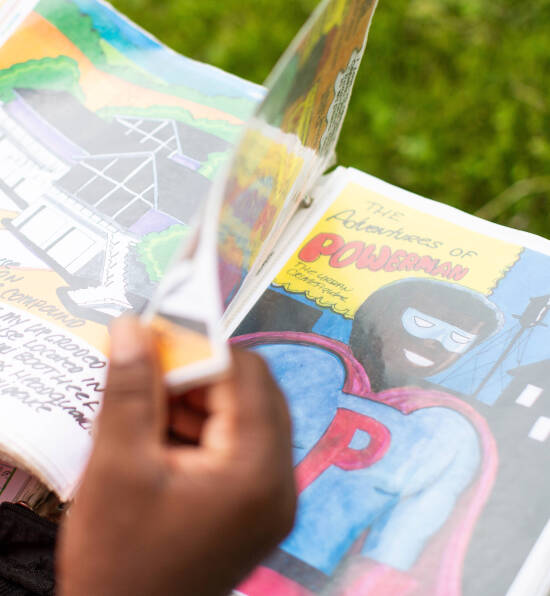 Robert Harris, Jr. flips through pages of a children's book he wrote and illustrated. Harris says he has loved to draw and write since he was a child.
Photo by Aaron Eisenhauer

Through all he does with his art, writing, gardening and the Urban Kid’s Project, Harris sees and works to save what could be lost, planting seeds and working to grow what he has planted. His vision for the future of the Urban Kid’s Project is to continue expanding throughout different counties of the Bootheel, to get more churches, organizations and individuals involved and help more people in need. He would also like to have a building headquarters and to meet more needs like transportation for the elderly to travel to doctors’ appointments. His ultimate goal is for people to put aside their political and religious differences and come together to help better people’s lives.

“My dream is to pull the neighborhood together not by myself, but with a network of people working together,” Harris says. “Right now, this is the beginning of the story.”