Finding Each Other Again, 45 Years Later: A love story 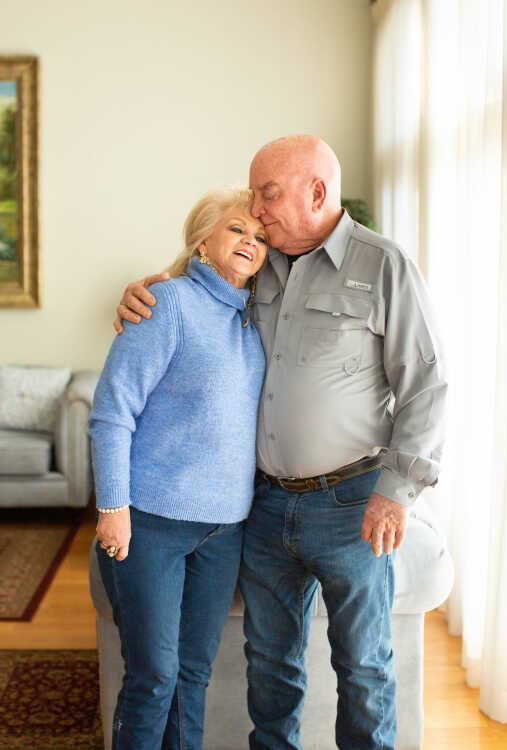 Carla and Jerry Young stand for a photo in their Cape Girardeau home on Dec. 14, 2020.
Photo by Aaron Eisenhauer
Order this photo

Sometimes, life weaves our stories together with people in ways we couldn’t foresee until later down the road. That’s what Jerry and Carla Young of Cape Girardeau have found in their journey to each other.

Their story goes like this: When Carla was 18 years old, she worked at a store next to a laundromat in Cape Girardeau. Jerry owned the laundromat and would sometimes come over to the store to exchange his change for bills. As a single mother of two children, Carla did her laundry next door at the laundromat. She viewed Jerry as a mentor, and often asked him for advice.

Carla went to beauty school, and at one point, she cut Jerry’s son’s hair. She also earned her bachelor’s degree in child development with a minor in family studies, going to college at the same time as her son. She taught preschool for 12 years and also worked as an aide at the Lutheran Home and the Veterans Home in Cape for approximately 10 years total, planning activities for the residents. At the Veteran’s Home, she was employed on the Alzheimer’s Unit, helping families learn about the disease and cope with their grief when they lost their loved one.

Jerry, on the other hand, grew up on a farm in Dexter, Mo., and was in missile control in the Army, stationed on an Air Force base in Detroit during the 1960s with a direct line to the President of the United States. After he got out of the service, he went to work for KFVS-12 for a little more than a decade and then owned nightclubs in Paducah, Ky., a time during which he also promoted a band. After tiring of working in that industry, for 15 years he started, worked for and then sold his business Speed Equipment World, which built race cars, vans and automotives, while working for Bristol-Myers for 22 years. Now, he owns Jay Why Inc., taking care of mortgage property across the country, a business he runs along with a gun shop and indoor shooting range. He was married for 50 years and has one son.

When Carla heard that Jerry’s wife, Judy, had passed away from Alzheimer’s, she reached out to him to try to help him understand the disease as he walked through the grieving process, since she had experience in helping family members with this from her time working at the Veteran’s Home. She also made a shadow box for Jerry filled with Judy’s possessions, which hangs in their home today. He asked her to clean his home, and she did. Carla and Jerry honored Judy and Jerry’s marriage to her for two and a half years before deciding to date. Then, 45 years after they first met, they got married.

“It’s just a blessing to each other to have one another,” Carla says. “Life is what you make it, my mother would say, and if you want it, you need to go after it.”

“It’s a good life. You know, life is — it’s lonely if you don’t have somebody to love and be with,” Jerry says. “So that’s where we’re at. We’re here to make a nice home and a nice family and go from there.”

Together, they love to do simple things: cooking, listening to TV and sitting by the pool in the summertime. They also enjoy going out for date night once a week.

“I didn’t get married to be single,” says Carla, who was single for 13 years before she married Jerry.

The two got married Aug. 8, 2020, at Mount Auburn Christian Church in Cape Girardeau. Carla’s son gave her away and was also a groomsman along with Jerry’s son and grandson. Carla’s daughter and daughter-in-law were her matrons of honor, and her granddaughter was her maid of honor. Her grandson was an usher.

“Never got to wear what I call a beautiful wedding gown or a veil, so I just glammed it up in it,” Carla says. “You never get too old to walk down the aisle.”

At the ceremony, Jerry and Carla participated in a salt covenant, in which they both poured sand into a vase, to symbolize how together, they will serve God and be the light of the world. They display the vase on the mantle of their home. After the ceremony, they held a dinner at their house. Carla and her sister decorated the cake, and Carla arranged the flowers.

After all they have been through individually and together, the two don’t take each other for granted. Each day, they are grateful for one another.

“I never gave up on love. It’s one of those things that you’re not finished unless you want to be finished, with anything,” Carla says. “And our love is still growing, because our love is still new. In marriage, I think, we’re just a blessing to each other that we’re older but yet found each other again.”

“If you’ve got love, somebody you love, and somebody loves you, then you’re lucky,” Jerry says. “You’re a very, very lucky person, because a lot of people don’t have that. But if you can find it and you can get it, you need to keep it.”

Here are a few of Carla’s reflections on building a strong marriage:

1. It’s good to laugh together. Laughter is good for the soul. And then, dance like nobody’s watching. ‘Cause we don’t care when we dance.

2. It is important to communicate with each other. He calls me, or I will call him throughout our day. Being married is a joy and a blessing. Jerry is the one person I go to for support. Be honest with each one another, and don’t have secrets.

3. Make your marriage one that honors God. So in other words, if you’re walking down the street holding hands, [that might cause someone else to think], ‘I think I might do that.’ … You might be the only Bible anyone reads.

4. Have a date night each week, and enjoy what God has given you, which is the blessing of each other. … Whatever is good will be good — we will enjoy together — and whatever is bad, we will conquer together.

5. Marriage should be selfless and serving one another. Make decisions together and learn to compromise. Being a team, you can accomplish so much more.