For the Long Haul: Portraits of Southeast Missouri Truckers 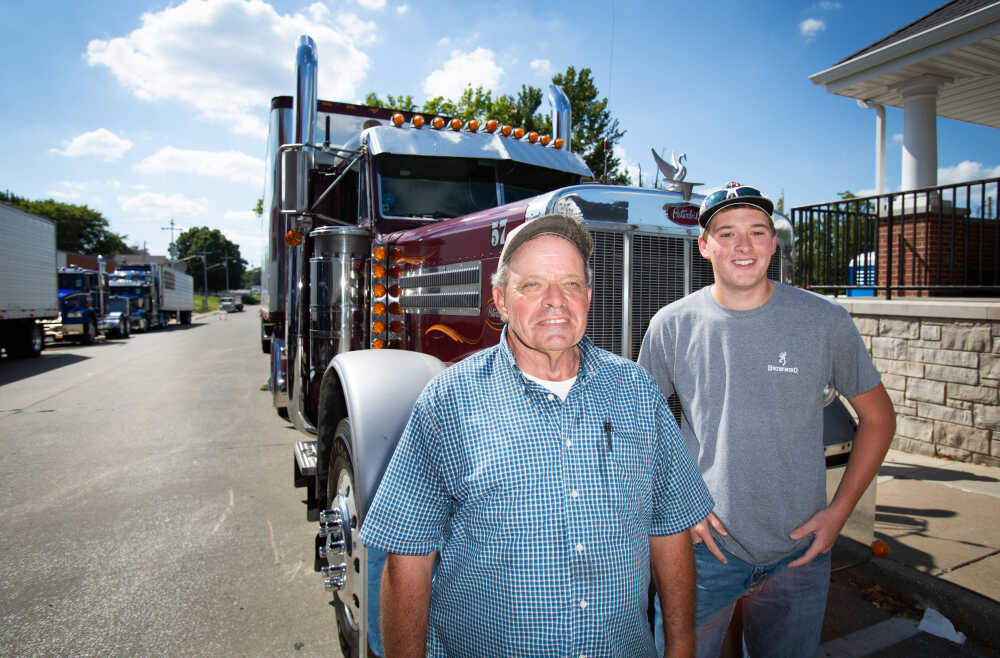 David Hepp stands with his grandson Grant Hepp in front of the truck that he gave to his grandson.
Aaron Eisenhower
Order this photo

To the men and women working every day to transport essential items across our country: thank you. This three-part series introduces you to some of these truck drivers. In this second installment, we meet David Hepp and his grandson Grant Harriss from New Athens, Illinois, and Heath Smith and his sons from Poplar Bluff, Missouri.

Not a bad birthday present. The truck is one Hepp himself used to drive, and although Harriss can't yet drive it, Hepp says it's never looked "half as good" as it does now that his grandson owns it. Through his gift, Hepp not only passed on one of his trucks, he also passed along his approval of his grandson's dream: to one day take over Hepp's trucking business.

"I've been around Grandpa too much," Harriss says as to why he wants to take over the business. "[I've] been around [trucking] a little bit and kind of grew to like it."

Hepp himself started driving over the road at age 15, when he was two years younger than Harriss is now. He worked for his own father and now owns the first truck his dad ever owned, a red 1949 International. In addition to farming approximately 400 acres, he hauls bagged rock to Menard's stores, decorative stone, grain and frozen material and has eight trucks and trailers with which he pulls refrigerator trailers, fan trailers, dump trailers and flatbeds. His work has taken him all over the country, including to Colorado, Florida and California, as well as into Canada.

"I started back, well, when I was 15, and I'm 68. That's a couple years," he jokes. "It's just all pretty much of the United States you see; it's really nice. You meet a lot of good people. You know, you hear a lot of stuff about how bad things are and everything -- you know, sure, it is in places -- but there's so many good places you go and so many good people you see. There's a lot of good in everything."

Hepp says during the COVID-19 pandemic, he has been very busy and thought it was interesting that hauling landscaping materials was considered "essential" because people were buying it to redo their homes and lawns while they had time on their hands during quarantine. He says finding "good help" for drivers is "almost impossible" right now due to the fact that a lot of people don't want to drive trucks and that many of the graduates from month-long truck driving schools have not yet gained practical experience driving a truck on the road. It's a struggle anyone would have who is not experienced at something, he says.

Another challenge of the industry, Hepp says, are the laws the "government's put in our way." Specifically, he says the electric log in trucks that prohibits drivers from driving for more than 10 or 11 hours at a time and forces drivers to stop for a 10-hour break wherever they are is one law that is not practical, because 10 hours is too much time to sleep and take a break.

Overall, however, he is glad safety regulations are put in place.

"Safety regulations, I like them," he says. "There's times when some of the Department of Transportation DOT guys, they get a little carried away -- I guess they want to get a name built for themselves, and you've got that problem occasionally -- but you run into a lot of those guys that are really understanding."

Driving with the public who often tries to pass tractor trailer trucks on the interstate because they feel unsafe driving next to them is another challenge of the road, Hepp says.

Still, driving truck is something he loves.

"I wouldn't give it up," Hepp says. "My dad started me out on this, and I was in the service, come back home, start[ed] back out with it again."

Although he wants his grandson to eventually take over the business, Hepp, who didn't attend college, encourages him to pursue some form of schooling first, after he graduates from high school next May.

"He's got all that in his blood, I don't know why," Hepp says proudly. "[But] it's going to be a college or trade school or something for him because you've got to have something else to fall back on, too. 'Cause if this all fell flat for me, I don't know anything else to do. I'm too old to try to do anything else. I'm 68; Medicare sounds good. Social Security sounds better." 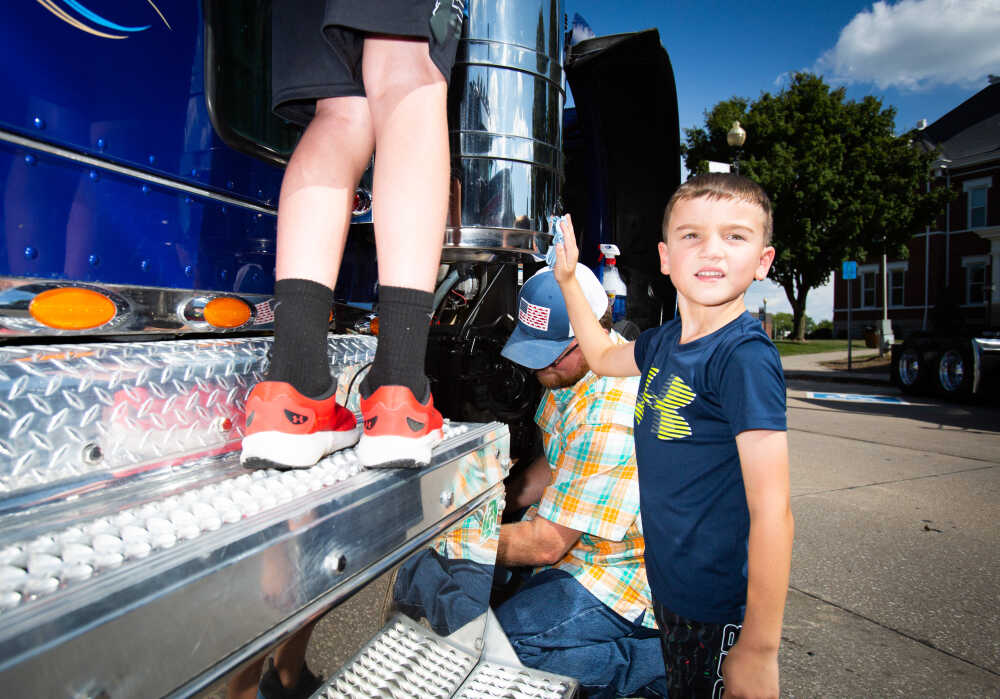 As each truck's paint job identifies the owner or company to other drivers going down the road, a truck's name, which is often painted on the side of the truck's sleeper cab also tells a story about its owner. Driver Heath Smith from Poplar Bluff, Missouri, has his own authority. He named one of his two trucks "I Got It Honest."

"I actually got that from an Aaron Tippin song," Smith says. "I just like the words to it, so it means a lot to me because I ain't ever had nothing gave to me. I've had to work for everything, and that's why I put that up there."

While some truckers christen each of their trucks with the same name, Smith names each of his trucks uniquely. He calls his other truck "Addicted to a Dollar."

"I just [name] mine off of music," Smith says. "Other people may do it different, but it's just music that I like. That's what we do most of the time [while driving] is listen to music, so I listen to the words, and it's kind of what I do."

Heath Smith's sons, Peyton, 10, and Paxton, 6, work together with Smith to clean his trucks nearly every weekend. Smith, who began driving over the road when he was 18, says he also helped his own father clean and shine his trucks when he was young, which is one of the reasons he is a truck driver today.

Smith has taken his oldest son, Peyton, on trips in the tractor trailer truck with him, including Peyton's favorite trip to Kansas City, Missouri.

"I get stronger," Peyton says of what he enjoys about going on trips with his dad and helping load the trailers.

Smith hauls mostly steel products and lumber on flatbeds from St. Louis and on south.

He echoes a theme that runs through many truckers' motives for being on the road: the freedom of being his own boss.

"[I like] not having somebody standing over me all the time. I never did like that," Smith says. "I'm a military man -- I spent 13 years in the military -- and I kind of got tired of that. I like this a lot better than that."