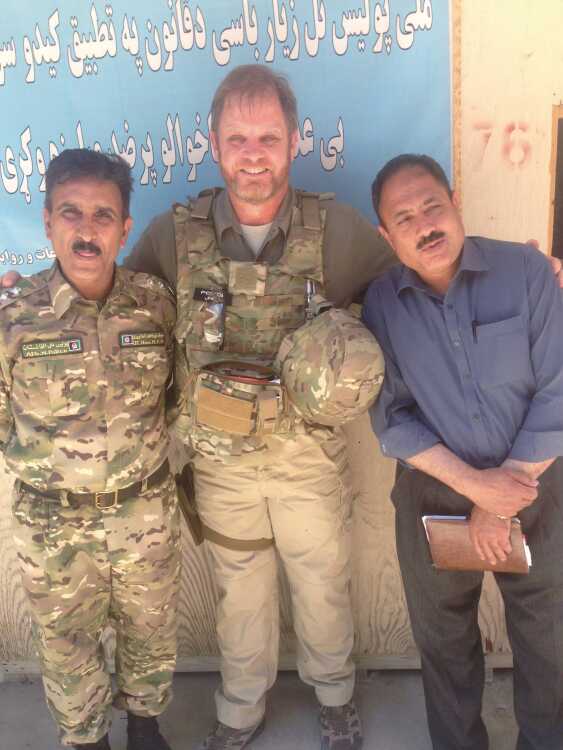 Danny Seger is photographed with Noor Muhammad, left, an operations officer, and Col. Bahkton Moman, the director of police intelligence for the Afghan police.
(submitted photo)

It's an experience few law enforcement officers share, Dan Seger says, but it's one he says he's thankful to have.

For the past eight years, Seger has been part of the Law Enforcement Professional (LEP) program, in which former law enforcement personnel train police officers in Afghanistan. Through his work alongside members of the United States military, he's helped to train local law enforcement in Afghanistan for success in better collecting and processing crime scene evidence.

It's a unique program that has given him the opportunity to share his investigative skills with others.

Seger graduated from the University of Missouri police academy, initially interested in filling a position at the Cape Girardeau Fire Department. When a volunteer job with the police department became available, he jumped on the opportunity.

His brother, a police officer, inspired his education in law enforcement; as soon as he stepped into that role, he says he greatly enjoyed it.

He gained a full-time patrolman position, staying with the department for some 15 years. Working with the local police force as an evidence technician and later as a narcotics investigator prepared him for his work in LEP. He entered the program in 2012, joining a group already in Afghanistan.

During that first contract, Seger was assigned to accompany an Army unit from Kansas. He helped Afghan police and the US Army to collect and preserve criminal evidence pertaining to improvised explosive devices, teaching them to properly bag evidence associated with the device. He mentored the local investigators and law enforcement while interacting with the locals, as well. Most of his work over the years has focused on criminal and terrorist activity in Afghanistan, but he says he's been given the opportunity to observe judicial cases, as well.

Those in the LEP program follow the Afghan police in criminal investigations from beginning to end, Seger says. They've introduced new technologies such as biological evidence testing to the Afghan police force. When he first entered LEP, Seger says the Afghan police did not heavily utilize fingerprinting or DNA evidence; since then, they've made significant strides in processing that data. Now, Afghanistan has a crime lab comparable to many in the United States, he says.

Seger himself helped with hundreds of individual cases in Afghanistan as he aided the local law enforcement in gathering and processing evidence.

Through his service in the LEP, he says he's gained a better appreciation for the Afghan culture and people.

"Just to meet the Afghan people and the Muslim community really opened my eyes to the Muslim culture," he says. "They're very good people."

He tells an anecdote of a particularly generous shopkeeper. When his wife was diagnosed with breast cancer, Seger left Afghanistan to support her through her surgery. When he returned, the shop owner offered Seger $5,000 of his life savings. He said he knew medical bills in the United States are expensive and wanted to aid Seger in paying them.

"That's the way that they consider elders -- they take care of family," Seger says.

While the relationship between the Afghan people and law enforcement has been difficult in the past, Seger says he's seen improvements through this program. He says he's observed through interactions with the people that the locals' impression of the police has become more positive throughout the years he has served.

While the contract for LEP was scheduled to end in November, Seger says COVID-19 ended his service early. In late June, he contracted the novel coronavirus through his base in eastern Afghanistan. He was quarantined in a military hospital and evacuated on a civilian contract airplane.

From there, he traveled home to recover. Seeing his family again meant the world to him; he says being apart from them is the most difficult part of serving. While stationed at a small Combat Outpost in Afghanistan during his first deployment, there were only three computers and a few phones shared among the team members of the unit. That means he was able to communicate with his loved ones back home for only 10 to 15 minutes each day, Seger says. Connectivity improved during later deployments, but he says it was still difficult being far away from family.

While he's home for now, he says he's looking for new opportunities in the future to complete similar work. He still keeps in touch with the friends and team members from his time in Afghanistan, including the shop owner who reached out after his wife's diagnosis. He'll chat with them over social media or messaging apps such as WhatsApp, keeping those connections to his service alive.

"Thank God for Facebook," he says with a laugh.