In Belarus: The tragic absurdity of a national leader and the inspiring courage of those who stand, peacefully, against him 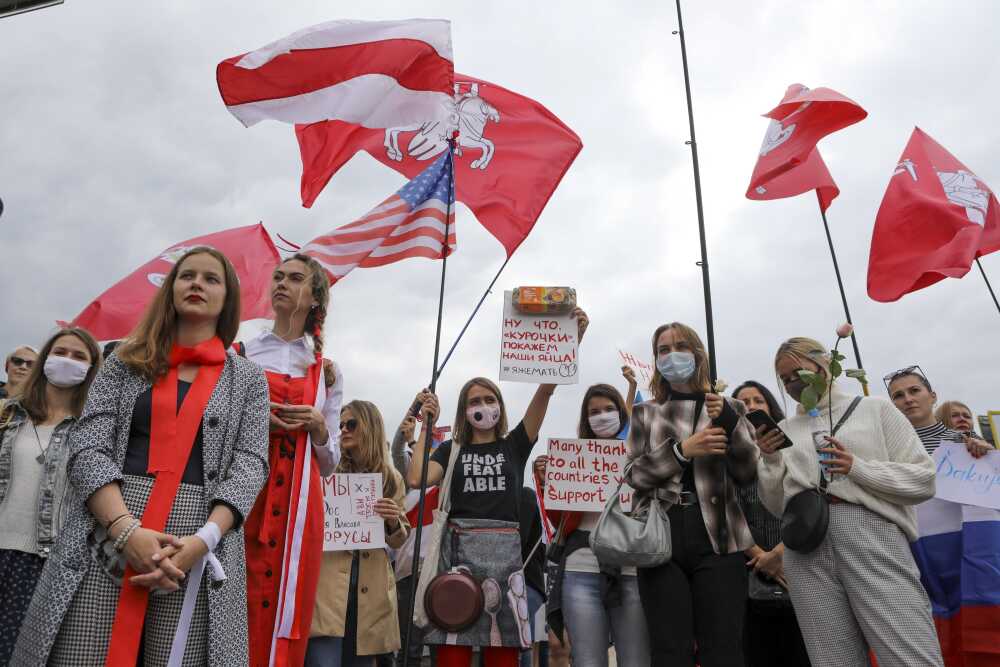 Women with old Belarusian national and American flags march during an opposition rally to protest the official presidential election results in Minsk, Belarus, Saturday, Sept. 5, 2020. Women's marches and demonstrations have become a regular feature of the four weeks of protest that have shaken Belarus following a disputed election that gave Belarusian President Alexander Lukashenko a sixth term in office.
Associated Press

Positioned between Russia and the West is a nation of beautiful people who have felt the brunt of history. In World War II, one in four citizens of Belarus died — more than 2,290,000 people — marking it as the country that suffered the worst destruction during the war in terms of percentage of population killed. Nearly 400,000 residents were deported to become slave laborers. Its capital, Minsk, was razed to the ground. The plan, according to historic documents, was for Germany to exterminate those who resisted, along with Jews, to make way for German colonization.

It was not the only time in history the people of Belarus have suffered. Because of its location, it has been fought over and divided, subjugated and oppressed in different ways.

When the Soviet Union crumbled, Belarus initially sought an independent, democratic path forward, but in the chaos, a strongman rose to power. Today, 26 years later and after several fraudulent elections, Belarus President Alexander Lukashenko is Europe’s longest-serving ruler, often described as Europe’s “last dictator.” For the past month, he has faced a protest against his rule like never before seen: massive, far-reaching, impassioned, socially diverse and yet peaceful. His response has been to become more and more ridiculous — and dangerous.

Belarus is a country close to my heart. It is the birthplace of my wife — and my children hold dual citizenships. I have spent many wonderful evenings strolling along the sidewalks of its capital, which was rebuilt in monumental Stalinist style with touches of Paris. Lately, it has become home to modern shopping centers and soaring new apartment buildings in bright colors and gleaming glass. Today, I recognize those streets and buildings in videos of peaceful people being brutally beaten and dragged into unmarked vans by goons in black uniforms.

There is no parallel to what is happening in the United States in places like Portland, Oregon, where protesters don military gear themselves, wield guns and attack government buildings with firebombs for spurilous reasons. In Belarus, the people not only refrain from violence, they pick up after themselves and make sure no litter remains after a demonstration. Their cause? New elections — to be held freely and fairly with international observation. And the release of political prisoners, so many political prisoners: including the leading opponents to the regime, with more arrested each day.

For years, Lukashenko has suppressed political opposition in a simple way. He arrested them. Or … they “disappeared.” But in each election, he allowed a few opposing candidates to remain on the ballot, a few that he thought would present no challenge to his rule. It was not uncommon for me to hear while visiting, “There’s no one else to vote for.” And thus, his electoral success held some legitimacy in the minds of enough.

Meanwhile, Lukashenko was not totally disliked. He offered a promise to the country of safety and security and a largely benign autocracy focused on public works such as clean sidewalks, new roads, modernized train stations and new hockey rinks. While the state maintained ownership of the nation’s largest industries — which were largely stagnating — he was convinced to allow tech firms to operate freely, which spurred Belarus into a leading European role in technology innovation. China made a massive investment — more than $1.2 billion — near the main airport to create a free-trade zone as part of its Belt and Road Initiative, which further spurred tech companies.

At the same time, Lukashenko sought to extract as much advantage from Belarus’ central location by playing Russia against periodic outreaches to the West. It’s been a fool’s effort, leading to tenuous oil discounts that have propped his rule, while causing him to become more beholden to Russian president Vladimir Putin.

Now, Russian support in troops and money — paid for by fealty and the selling of state assets to Russia — appears to be Lukashenko’s emergency plan to remain in power. Already, he has replaced most of those who managed state media — many who resigned in protest because of his brutal tactics — with Russians controlled by Putin. Protesting workers, including managers at the largest state-owned factories, are being replaced, too. The message: Stand against me, and you will be beaten, tortured or lose your job.

Many in the international press, including The Associated Press, have been forced to leave.

In short, Lukashenko’s arrogance backfired against him. Leading up to elections this August, he jailed his main opponents, only to allow the stay-at-home wife of one to replace her husband on the ballot. Lukashenko considered her no threat; she was a 37-year old former English teacher who had left her career to take care of two children, one with special needs. What the autocratic president did not anticipate was an electorate fed up with his response to the coronavirus and worried about the economy, coalescing around her candidacy.

Accustomed to being “reelected” with numbers that stroked his ego, Lukashenko — who incredibly once boasted to international diplomats that he “lowered” his official vote percentage in a previous election because of concern observers would not believe how much his people loved him —was implausibly proclaimed the winner of August’s election with 80 percent of the vote (to his main opponent’s 10 percent). The official results were quickly and broadly discredited. Election officials around the country began sharing how the vote count had been manipulated, with dozens sharing secret recordings and photos of swapped numbers. Exit polls indicated that his opponent, Svetlana Tikhanovskaya, may have actually won with 60-70 percent of the vote.

When Tikhanovskaya tried to submit an official challenge to the results, she was detained in a government office for hours only to reemerge after filming a video, decried as a “hostage video,” recognizing the results and calling upon Belarusians not to protest. She later fled the country, apologizing to her supporters but citing the safety of her children. As hundreds of thousands nonetheless turned out to protest, Lukashenko made a point to be seen carrying an assault rifle and helicoptering around the capital, while more than 7,000 protesters were arrested, a few killed, and hundreds mercilessly tortured.

With photos and videos of people — after being beaten — showing up on social media, the Internet was shut down for several days. But Belarus had become host to tech innovators, and ways around the shutdown were quickly devised. Photos and witnesses of the atrocities could not be fully suppressed. International condemnation flooded in — except from Russia and China.

Now the nation is in a quagmire, and Lukashenko has changed tactics. Instead of grabbing people at mass protests and beating them almost randomly, opponents are more quietly detained and disappeared. This week, it was Maria Kolesnikova, another leader of the opposition. An eyewitness said she saw masked men take Kolesnikova’s mobile phone and push her into a minibus on Monday morning.

Besides the detentions and beatings, Lukashenko is also pulling ridiculous stunts. Last week, he announced in a public meeting with a prominent Russian official that the high-profile, recent poisoning of an anti-Putin Russian politician was a hoax. It had been exposed, Lukashenko said, by his secret agents, who had been able to record conversations of German and Polish officials setting the whole thing up, to of all things, discredit Belarus and dissuade Russia from intervening to help the embattled Belarusian president.

Even some pro-Putin Russian commentators sounded embarrassed by the preposterous claim. Here is part of the conversation Lukashenko said his agents uncovered:

Warsaw: Agree, we need to discourage Putin from poking his nose in the affairs of Belarus. The most effective way is to drown him in Russia’s problems, and there are many of them! Moreover, they will have election in the near future, voting day in Russia’s regions.

Berlin: That’s what we are working on right now. And how are things in Belarus in general?

Warsaw: Not so good, to be honest. President Lukashenko turned out to be a tough nut to crack. They are professionals and organized. Obviously, Russia supports them. The officials and the military are loyal to the president. We are still working. Let’s discuss the rest when we meet, not over the phone.

Berlin: Yes, yes, I understand, see you then, bye.

So far, the protesters have maintained strength and peaceful — even amusing — tactics. (Images of squirrels — referencing “a tough nut to crack” — have started to appear.) Each weekend more than 100,000 turn out to walk the streets of Minsk, joined by crowds in other cities. Prominent government officials — including ambassadors — have resigned. Some police have walked off the job. Strikes, though, which were becoming more prevalent, seem to have been largely suppressed.

Many of the elderly are fearful. Their news comes from state-run TV, now managed by Russian personnel. The answer to the question of safety vs. freedom is not so clear to them — even if it is safety bought with innocent blood. And Lukashenko’s gambit is clear; if it means him staying in power, defining safety in his own terms, he is not afraid to shed innocent blood. Nor does he appear concerned about selling Belarus’ economic future to Russia if it means maintaining his position.

Against him stand waves of people carrying flags and flowers, showing courage and hope, that one day good will prevail. The opposition candidate, Tikhanovskaya, has also started to find her voice, speaking out from neighboring Lithuania to her fellow Belarusians, as well as to the rest of the world.

In the meantime, Belarus is suffering again; its future uncertain.

Jon K. Rust is publisher of the Southeast Missourian. He previously studied and worked in what was then the Soviet Union, including Russia. This column was originally posted online Wednesday morning, Sept. 9.

Millenials who prefer socialism ignore the lessons of history
Jon K. Rust
During my college years, I studied, worked and traveled in what was then the last days of the Union of Soviet Socialist Republics. Personal lessons and observations from those two years abound. Among them: the stark failure of totalitarian socialism.
More from this columnist · Jon K. Rust