50 Years of Friendship, One Birthday Card 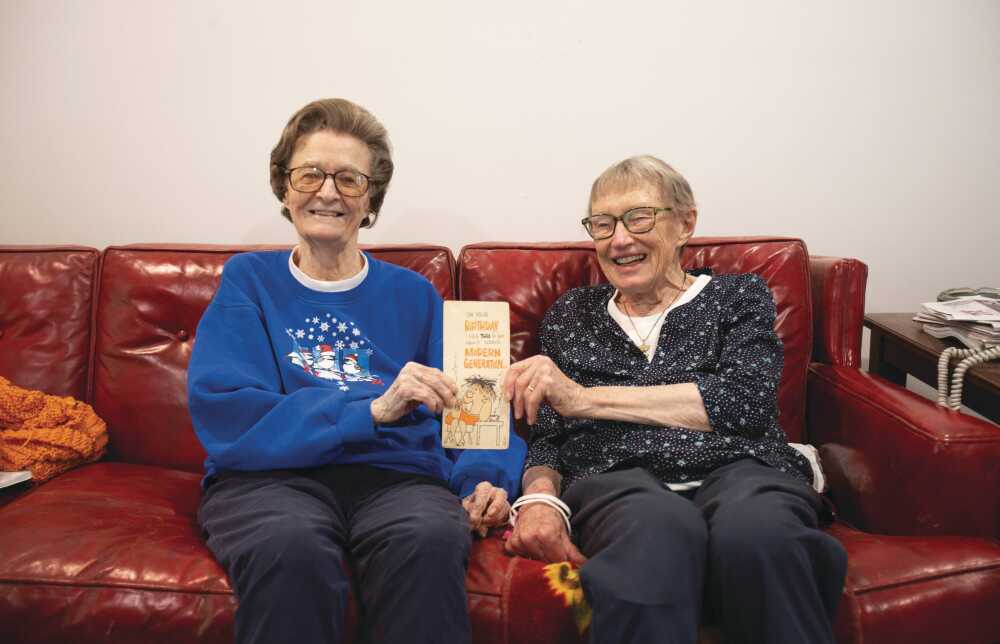 Joan Weeks and Marge Nunnelly lift up the birthday card that they have been passing back and forth for more than 50 years.

The custom of sending greeting cards can be traced back to ancient people in China celebrating their New Year and to early Egyptians giving greetings on papyrus scrolls. By the early 15th Century, handmade paper greeting cards were being exchanged in Europe. Birthday cards became famous in the 1800s with the advent of the postage stamp.

According to the Internet, sending a birthday card can help you express emotions of sympathy, joy, love, humor, thanks and admiration. Many people exchange birthday cards annually. However, few people can claim to have exchanged the exact same birthday card with a good friend -- or anyone else, for that matter -- for multiple years. Like more than 50! 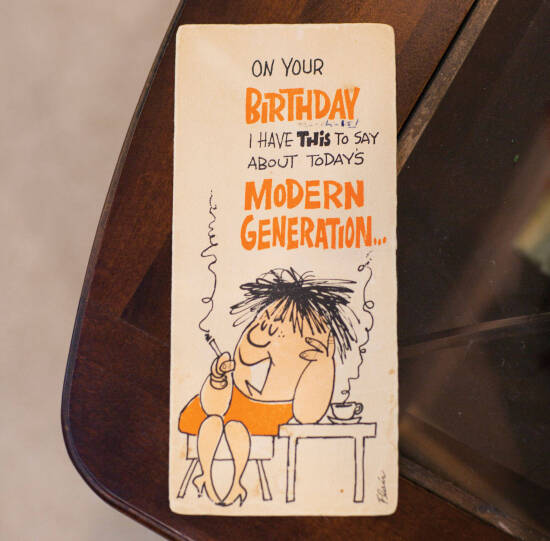 Joan Weeks and Marge Nunnelly have been sending each other the same birthday card for more than 50 years.

Like many things from "ancient history," the start of this story is a little murky. What is certain is that my mom bought a birthday card for her best friend Marge when Joan was "about 35." The two of them have sent this same card back and forth ever since then, without fail. Mom turned 92 in March. You can do the math!

A relatively plain card, on the outside a woman is smoking (how dated!), and it says, "On your birthday, I have this to say about today's modern generation ..." Then on the inside is written: "You and I Ain't In It!" It ends simply, "Signed, X A Friend."

This is the card that has been passed back and forth for more than 50 years. No one ever added anything, just the simple and prosaic greetings from "a friend."

Since Marge's birthday is March 1 and Joan's is March 20, my mother has had the larger burden of keeping the card safe and keeping the chain going. Marge could pretty much mail it right back, which turned out to be extremely fortunate when her house burned a few years ago.

So that means, among other things, the card went between the two friends for all that time with the postal service never letting either party down. (Thanks, postal workers!) It also continued to show up through several moves and the fire I mentioned. Somehow, the card always made it through. It was simply meant to be.

When Mom sent it to Marge the first time, Marge wasn't sure who it was from since there was no signature. However, her husband, the local physician Gordon Nunnelly, saw the card, and famously said, "Hell, you've only got one friend!" With that, he pinpointed Joan as the culprit.

By way of further explanation, Mom was running my dad's medical office at the time (he was an anesthesiologist) while Marge was running her husband Gordon's office (he was a general practitioner and family physician), so it was natural they would be friends.

The family connections were even tighter since Dr. Nunnelly was our own family doctor when I was a child. Gordon was a good doctor, too. When he was about to give you a shot, he'd suddenly ask you to "say Rumpelstiltskin backwards." While you said, "Huh?," the shot was painlessly provided.

Our families were always close, literally as well as figuratively. We lived in the 1700 block of Bessie Street in Cape Girardeau, while the Nunnellys were only a few blocks away in the 1400 block of Themis Street, just on the other side of Franklin Elementary School. It was easy for us to get together for meals, holidays and more. The adults were only about a year apart: Bob (my Dad), Gordon, Joan and Marge, in that order, all with birthdays in March or April. The kids were also close together in age, not surprisingly.

My parents Bob and Joan had three children: my sister Melissa, me and my brother Drew. Gordon and Marge Nunnelly had four kids: girls Barbara and Carol and boys Bruce and Paul. The families still keep up with each other, although most of the kids -- adults now, of course -- are scattered all over. I'm the only one who stayed in the area, along with Joan and Marge.

After mom sent the card to Marge the first time, Marge sent the card back the next year unchanged, which Mom found amusing. The trend continued until the tradition was firmly established. It continues to this day.

Many things changed over the years, but the birthday card exchange has never varied. It was a comforting symbol of sympathy for their respective losses, joy for their many accomplishments (such as raising several children, not to mention husbands), love for each other and for their lives, humor at life's many funny moments, thanks for all the blessings they were given, and admiration for each woman's steadfast and special friendship.

And just for the record, Marge actually has a lot of friends.