Here's what doesn't help: Shutting down economies or attacking each other over masks 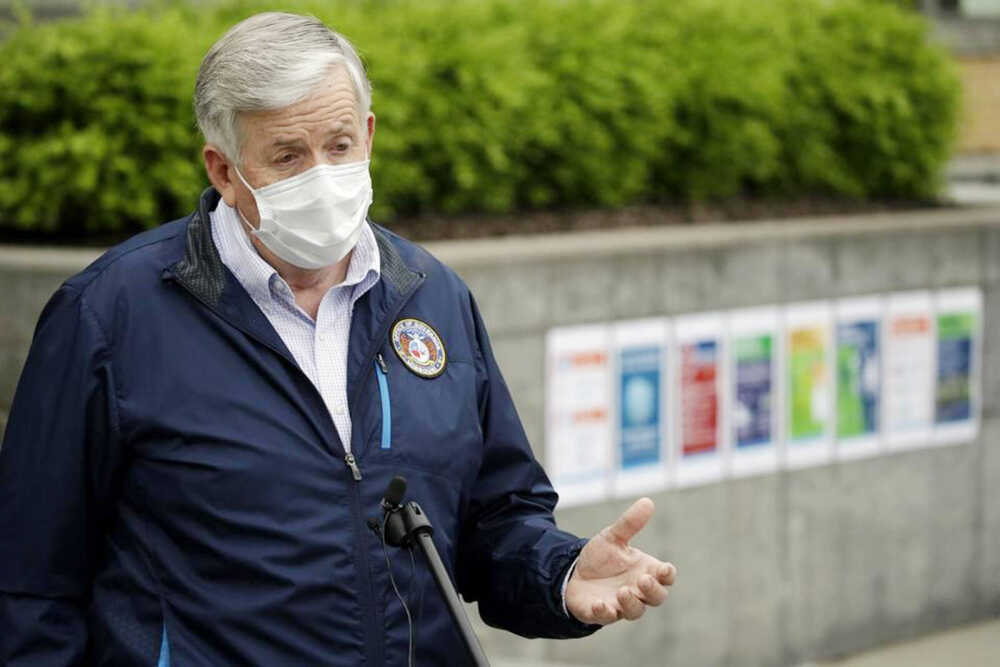 Missouri Gov. Mike Parson wears a mask while talking to the media in May.
Associated Press

Rust Communications, which is based in Cape Girardeau, has newspapers in eight states. So far, we've had brushes with Covid-19 -- several employees who were exposed or sick with symptoms -- but until end of last week, only one person was "presumed" positive. The others tested negative. The "presumed positive" was a summer intern still in college who had been working remotely with news staff. Her one visit to the office was for less than 10 minutes while masked the day before she was believed infected due to a known contact, then becoming sick. (Still, we isolated the editor she worked with.) Her family doesn't appear to be worrying, because of her age, but they tell us she is "still struggling." We pray about her daily.

One employee in Arkansas tested positive, and she is hospitalized in bad shape. We are worried about her. Several employees there are now in self-quarantine; thankfully, one has already tested negative. In several other locations we have employees who are self-quarantining -- in some cases, working from home -- because of spouses or children who tested positive.

Our prayers are with them all. Meanwhile, their tightly-run operations are stressed by their absences.

For months we've been doing scenario planning if someone gets sick in one of our operations. Much of the work is specialized and not easily handled by others. Much of our workforce is older than average. Only a fraction can work remotely. To mitigate the risk, most of our locations have been working in "pods" -- not mingling with other parts of the operation -- to lessen the contagion if someone contracts the disease. Staffs have been social distancing -- or wearing masks if that isn't possible. Often, we're doing both. Until last week, although some of our newspapers are in ZIP codes with high contagion rates due to meat processing plants, we were unscathed.

The impact of multiple positive cases would be so debilitating in some of our operations we've been forced to consider how to suspend a newspaper in a worst-case scenario. One of the factors outside our control is how employees spend their time outside the office. Are they being prudent? Avoiding bars (the number one risk)? Masking up? We regularly communicate about risks and best practices. And we have instituted new policies for everything from sanitation schedules to travel notification. But, ultimately, we are a team of free individuals, thank God, who must rely on each other to be responsible, especially outside the workspace. Blessedly, we have a great culture, where people root for each other and care for each other.

What is the best chance for our nation to succeed -- and us with it? Closing down the economy is not it. A lockdown only buys time at incredible cost: human, psychological, economic. Small businesses in our town have already closed forever; locking down again will create more damage to those who need to work, as well as to their families.

So how do we manage around a deadly virus while wanting the economy to rebound and businesses to open up? It can't be one extreme or the other: either shutting everything down or acting like the virus doesn't exist. The first way leads to economic and social devastation; the second to unnecessary deaths and human pain. The middle way is to be personally responsible, socially distance, wear masks as appropriate, wash hands regularly, stay home when sick. At some point, a vaccine will come; or herd immunity will be developed.

This malady will not always be so dangerous. Already, some scientists are pointing out two differing strains of the virus developing: one that is more transmissible but less lethal, which may eventually crowd the other one out, similar to what happened with the Spanish Flu. This week we also learned good news about a possible vaccine.

In the meantime, taking personal responsibility -- social distancing, wearing masks, gathering with friends mainly outside -- is the best way to open the economy. Such precautions, even if inconvenient and at times unpleasant, preserve opportunity. On the other side, uncertainty will always be part of life. Taking precautions will not eliminate risk. And yet, opening up the economy, going back to school, rooting for each other to succeed, are all things we should be striving for. Let's do it smartly, empathetically, recognizing we're all in this together. Attacking each other -- denigrating each other -- doesn't help.

View 57 comments or respond
Community discussion is important, and we encourage you to participate as a reader and commenter. Click here to see our Guidelines. We also encourage registered users to let us know if they see something inappropriate on our site. You can do that by clicking "Report Comment" below. Our goal is to create a place for robust and civil discourse about our community, state and nation.