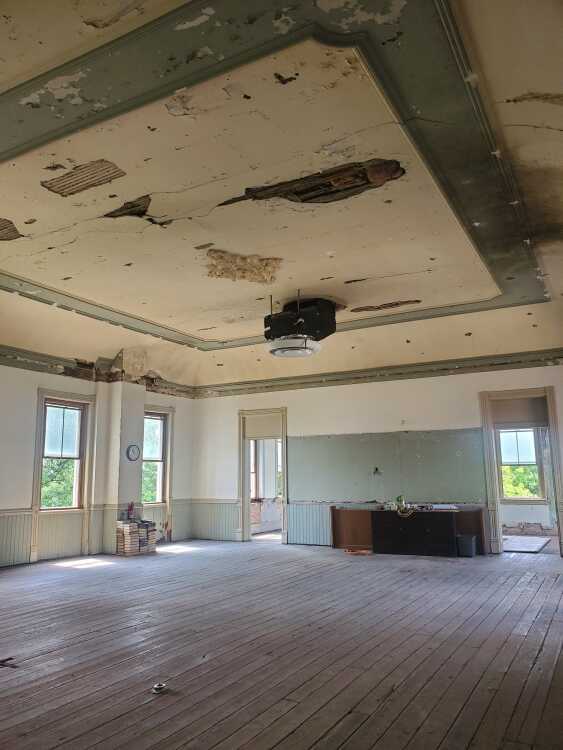 In this recent photo, some original plaster is shown in the Cape Girardeau Common Pleas Courthouse, the future Cape Girardeau City Hall. City officials are seeking historic images of the courthouse to aid in renovation plans.
Submitted by Anna Kangas

Anna Kangas is on the lookout for photos of the Cape Girardeau Common Pleas Courthouse through the years, and she’s requesting the public’s help.

Kangas, who works for the city’s development services department and is the City Hall project manager, said the process to transform the Common Pleas Courthouse into Cape Girardeau’s new city hall is underway.

The project’s architect is researching the building’s history, and so far, one detail that has come to light is, at one point, the Common Pleas exterior was painted gray.

“We’re not sure how long it was painted gray for. We’d always thought it was just a red brick building,” Kangas said.

“We’ve also done some selective demolition at Common Pleas and (the) Carnegie (Library, formerly known as the Annex), and we are removing the 1970s wood paneling,” Kangas said.

Under the paneling and some drop ceilings, Kangas said, crews found some original plaster work and trim.

“One thing the architect has asked me for, that we’re hoping to get out of our call for photos: Does anyone have any interior photos of Common Pleas, before the 1959 era?” Kangas said. “We can’t find much documentation of the inside.”

Kangas said her hope is, maybe a family was at Common Pleas for whatever reason and took a snapshot with the building in the background, or even inside.

The architect has checked the archives in the County Archive Center in Jackson, Kangas said, and found some information, but more would be helpful.

“Part of the issue is, some of the plaster we found is not connected to what’s behind it anymore,” Kangas said. “We may have to put new plaster up, but we really want to save some of this historic trim.”

More information about what it looked like would aid in that endeavor, Kangas said.

People with photographs are welcome to bring them to City Hall, at 401 Independence St., she said. The Development Services’ office is upstairs. City staff can scan the images and return them right away, Kangas said.

If images are already digital, they may be emailed to Kangas at akangas@cityofcapegirardeau.org.