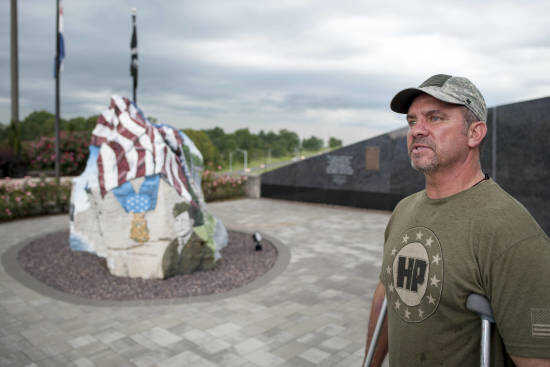 David Cantrell is seen on Wednesday, Aug. 21, 2019, at the Avenue of Flags in Cape Girardeau. (Tyler Graef ~ Southeast Missourian)
Order this photo

As we near Independence Day, it's important to consider the things that make America exceptional. The American experiment focuses on freedom, the inalienable rights endowed by our Creator. Preserving that freedom takes men and women of courage. Yes, those individuals who defend the nation in the armed services. But also those who get involved in their community through service and others who lead through business enterprise.

It's with this mindset the Southeast Missourian presents the Spirit of America Award each year on the Fourth of July. The award recognizes those who contribute to their country and community through patriotism, loyalty, generosity, civility and a strong work ethic.

This year the Southeast Missourian received 12 nominations for nine individuals who contribute in different ways to their community. Represented are leaders in education, business, community and the military. Some are familiar faces while others have quietly worked behind the scenes.

This year's nominees include: Tamara Buck, David Cantrell, Derick Charles, Russell Grammar, Maryann 'Miki' Gudermuth, Kenneth Haas, Seth Hudson, Kenneth Martin and Jim Riley. Each nomination was published in Tuesday's Southeast Missourian and can be read online at semissourian.com. We encourage you to spend time reading the nominations. Being nominated is a significant honor in itself.

This year's award recipient is David Cantrell, a Navy captain who operates a business in Cape Girardeau and volunteers his time in numerous ways -- most notably with the Avenue of Flags and Veterans Memorial Plaza in Cape County Park. Five times each year -- Memorial Day, Flag Day, Independence Day, Patriot Day and Veterans Day -- flags representing deceased veterans from Cape Girardeau County are flown, and the permanent Veterans Memorial Plaza is a moving tribute to those who served in the military.

Cantrell was nominated by four organizations: Noon Optimist Club, Kiwanis Club, Noon Lions Club and Clippard Wilson Taylor VFW Post 3838. Each nomination provided a testament to his involvement in community and his patriotism.

Last year, Cantrell suffered an injury in a motorcycle crash. He spent 34 days in the hospital and had the lower portion of his left leg amputated. Of course, this meant he would miss one of the days when more than 700 flags are flown at the Avenue of Flags. Cantrell is a regular leader of this effort. But in his absence, an army of friends and family turned out to post the flags. That, in itself, is an indicator of how much this community appreciates the captain's leadership.

On Saturday evening at the City of Cape Girardeau's Great American Fourth of July, we'll recognize David Cantrell as the 18th recipient of the Southeast Missourian Spirit of America Award. We hope you can join us. Social distancing will be encouraged, and there is plenty of room to spread out. Faune Riggan of KZIM/KSIM will broadcast the event live on the radio, allowing those who wish to remain in their cars for the fireworks display to still hear the program.

Before the Spirit of America presentation, the Cape Girardeau Municipal Band will perform a selection of patriotic songs. Fireworks will begin at 9 p.m., synchronized to patriotic tunes played at the grandstand and on River Radio stations.

Congratulations to each Spirit of America nominee. Thank you for your service. And happy Independence Day. May God continue to bless this country.