Mayor against removal of CSA monument from downtown Cape 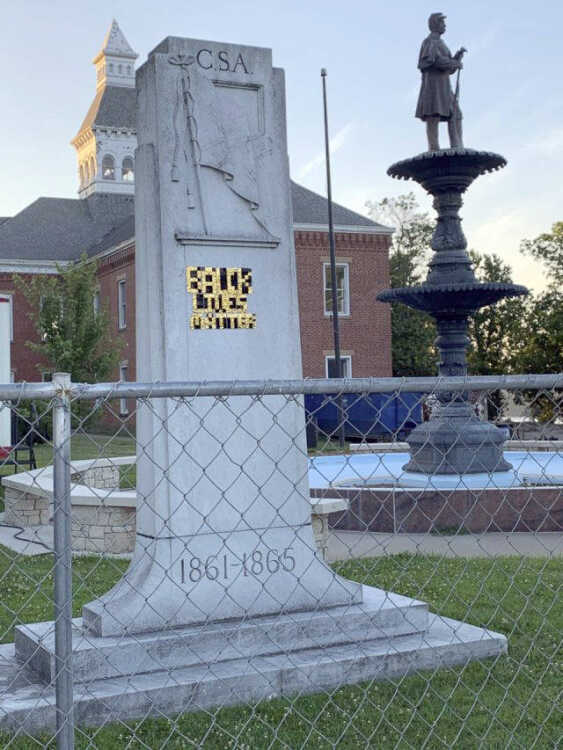 The Confederate States of America monument in Cape Girardeau's Ivers Square seen in the early morning hours of Friday. The defacement was removed later.
Submitted

Cape Girardeau Mayor Bob Fox says he is not in favor of removing the Confederate monument in Ivers Square and is “shocked” at a recommendation made by a city panel he asked to weigh in on the matter. 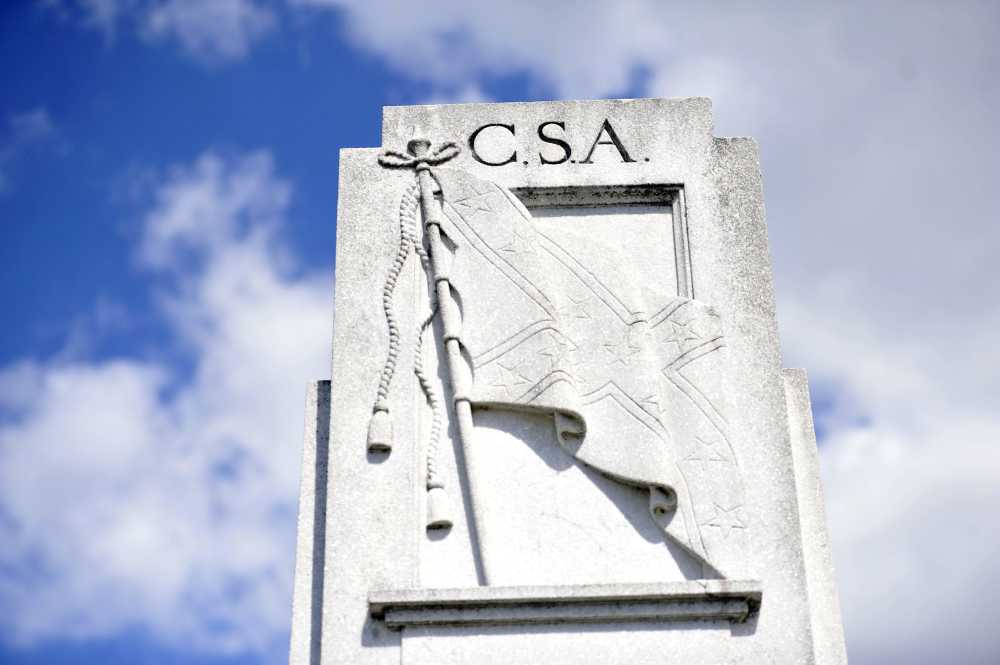 Differing thoughts on Confederate marker in Cape, agreement on Juneteenth
By Jeff Long ~ Southeast Missourian
The nearly 90-year old Confederate States of America monument in Ivers Square in downtown Cape Girardeau, the subject of a recent petition effort, should be removed, said the president of Cape Girardeau's NAACP. ...

The city’s historical preservation commission voted 8-0 on June 23 for the immediate removal and storage of the Confederate States of America (C.S.A.) marker.

“Everybody is overreacting to what’s going on in the country,” said Fox, who took office in 2018.

“I think (the commission) bowed to activism,” he added.

“What happened in Minnesota was a tragedy,” Fox said, in reference to the May 25 death of African American George Floyd while in police custody on a Minneapolis street.

“Most police departments and officers are not like that,” said Fox, who noted he has been receiving significant input as to what the City Council should do about the marker when it meets Monday.

“I’ve been getting 30 to 40 emails a day for the last two weeks,” said the mayor, who operates a dental office with his son.

“Initially, most of (the posts) wanted (the marker) taken down,” Fox said, “but in the last week, about 90% of them wanted the monument left alone.”

The 14 1/2 foot white slab marker has been in Ivers Square near the old Common Pleas Courthouse since 1995. It was originally situated on Morgan Oak Street near the Mississippi River, where it was erected in 1931 by the United Daughters of the Confederacy. 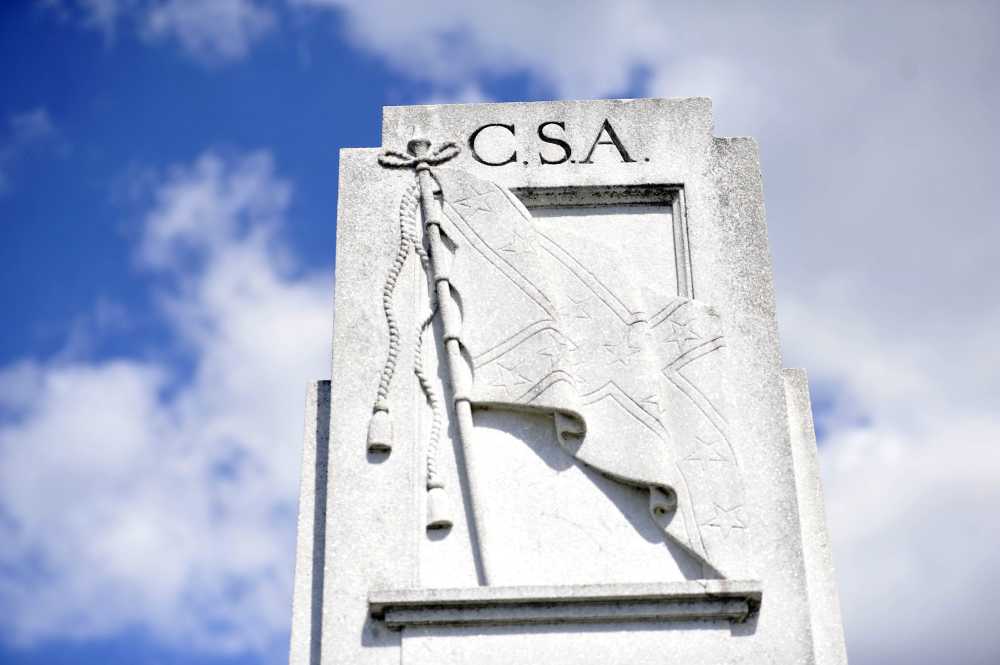 Counter petition opposes removal of Ivers Square Confederate monument
By Jeff Long ~ Southeast Missourian
A petition opposing the removal of the Confederate States of America monument in Cape Girardeau's Ivers Square has been circulating on the Internet since Tuesday. As of 4 p.m. Friday, the petition, written by Erin, a Cape Girardeau County resident who declined to give her full name due to safety concerns, had garnered 390 signatures...

Stephen Hoffman, coordinator of Southeast Missouri State University’s historical preservation program, told the commission last week the monument lost its “historical integrity” when it was moved in the mid-1990s.

Fox said the tearing down in other communities of the statues of Francis Scott Key, Ulysses Grant, George Washington and Thomas Jefferson “makes no sense whatsoever.”

The monuments to Key and Grant were toppled June 19 in San Francisco.

Key, composer of “The Star-Spangled Banner,” the national anthem of the United States, was a slave owner.

Grant, who led the Union forces who defeated the Confederacy in 1865, married into a slave-owning family in Missouri and is the last U.S. president to have owned another human being.

Grant’s legacy is complicated because while he personally directed the labor of enslaved workers, the general also emancipated a slave, William Jones, in 1859.

The markers to two other presidents, Washington and Jefferson, were toppled in Portland, Oregon, on June 18 and June 14, respectively.

“Removing monuments is not the way to battle racism in America,” Fox said. “We need to look at one another as fellow human beings, not as one race or the other. (But) we’re so divided right now.”

It has been suggested, Fox said, the matter be put to a public referendum.

The mayor expects a large crowd to turn out for the discussion in City Council chambers next week about the monument.

“We can’t move the place of the meeting,” said Fox, “because we have multiple public hearings scheduled for chambers that have already been advertised.”

The expected large turnout, he said, will be handled with social distancing in mind.

Those who attend will sign in and wait in the hallway until summoned inside. 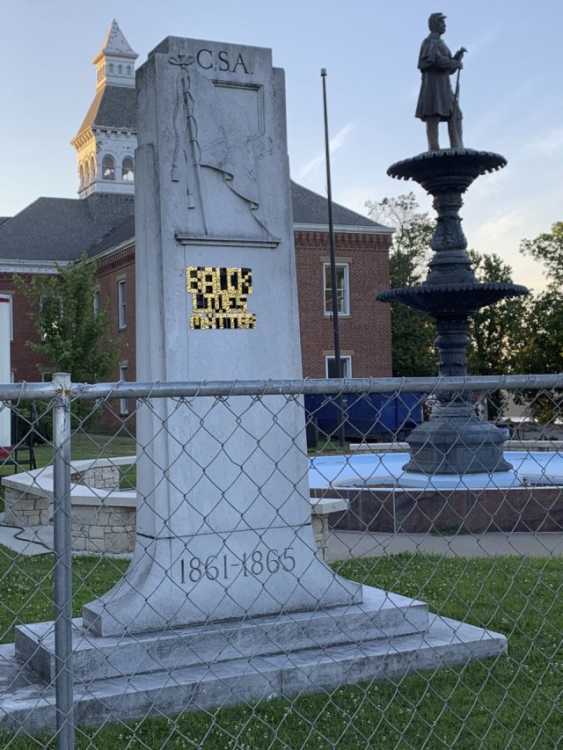 Fox said the monument is a topic for discussion at the council’s study session.

“If there is consensus, if we put it to a vote, we can direct the staff to remove the monument,” Fox said.

“In my opinion, the monument is not the problem,” he said. “We don’t need to cower to radicals.”

The C.S.A. monument was defaced by vandals Thursday night who inscribed the message: “Balck (sic) Lives Matter.” By Friday, the message had been removed.

In a related note, the Mississippi legislature voted Sunday to remove the Confederate battle emblem from the state flag, a measure the Magnolia State’s Republican governor, Tate Reeves, has vowed to sign.

View 37 comments or respond
Community discussion is important, and we encourage you to participate as a reader and commenter. Click here to see our Guidelines. We also encourage registered users to let us know if they see something inappropriate on our site. You can do that by clicking "Report Comment" below. Our goal is to create a place for robust and civil discourse about our community, state and nation.