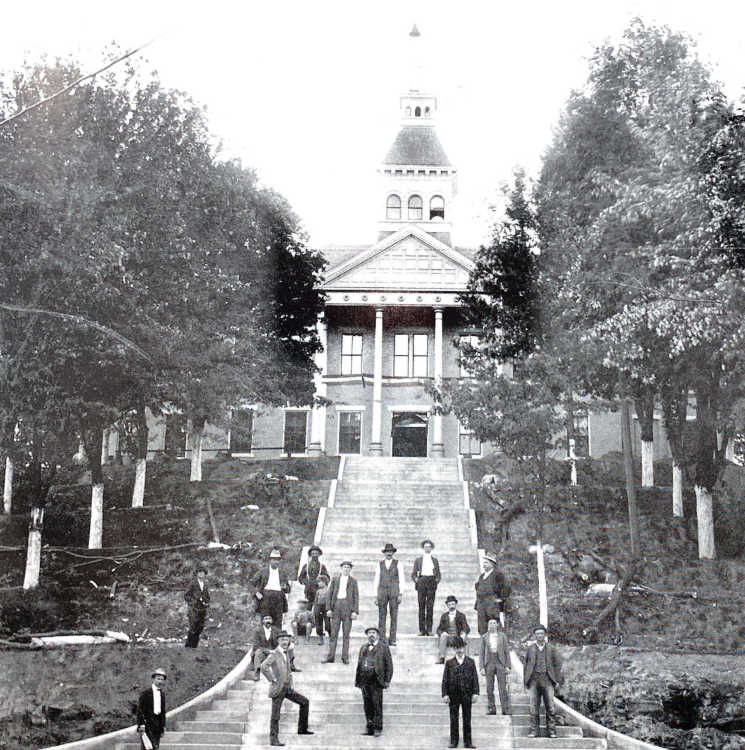 Several prominent men in the community stand upon the steps leading to the Common Pleas Courthouse in Cape Girardeau after the cement for the courthouse steps was newly poured in 1900. Photo and caption from “Cape Girardeau Faces and Places: 1850-1950,” published by Rust Communications in 2003.

Search “Cape Girardeau” on Google, and the one image that appears is the iconic Common Pleas courthouse on the hill, overlooking the Mississippi River. In 1853, traveling from New Orleans, members of the Penzel family were greeted by the building of a simpler courthouse. And now, five Penzel generations and some 166 years later, Phil Penzel and his company spearhead the design and construction of the renewed version, spanning the late 19th and 20th Centuries and now leaning into the 21st. 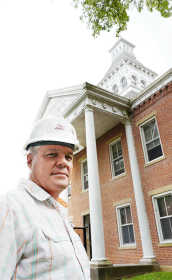 Few buildings in the United States span three centuries. Even fewer are used mostly for the purpose they were built. It is understandable: Penzel takes pride in the project, even to the point of calling the $12 million project the pinnacle of his career and family business. It’s a history that chronicles that of Cape Girardeau through wars, judgements, religious expression and community events that make up the multi-colored fabric of our town.

“I will tell you right now: there is no doubt in my mind, this will be the hallmark of my whole career,” shared Penzel. “And I have been telling my employees and design team, ‘This will be the most iconic project our company has ever done in its history.’”

After landing in Cape from Germany, Penzel’s family has been building in Cape County for six generations. “We traced our construction roots back an additional three in Germany,” Penzel said. “So, to be part of a hometown team is a tremendous honor, to work on a project with such historic beginnings.” 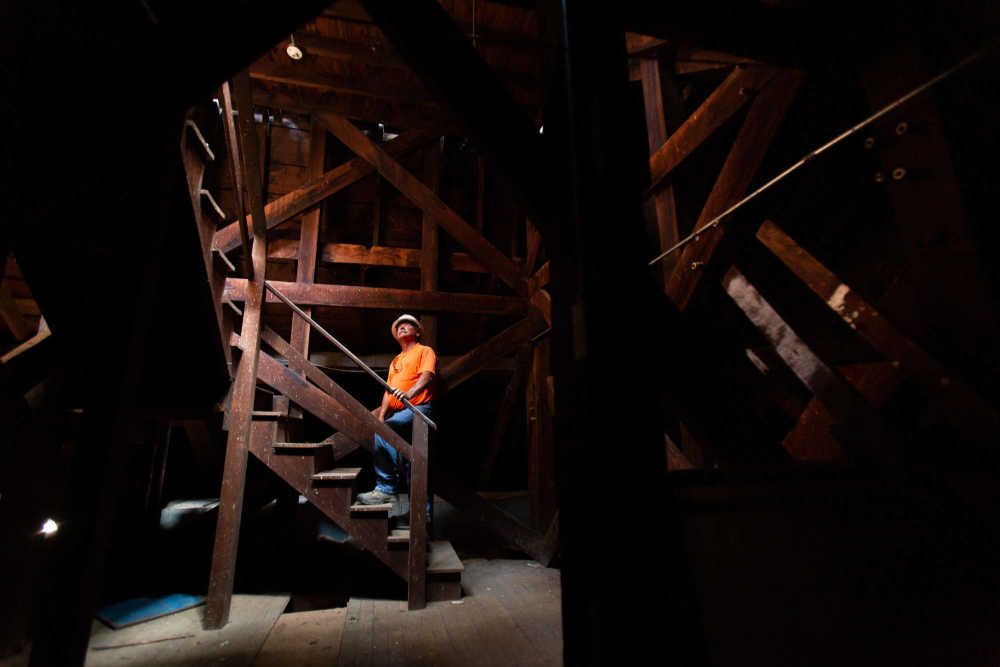 Project superintendent David Marigeaux pauses at the bottom of the staircase leading to the cupola in the attic of the Common Pleas Courthouse as renovation continues on the historic structure on Tuesday, June 16, 2020.

The building and its history

A two-story, red-brick building on a limestone foundation with a hipped roof and cupola (tower) located at 44 North Lorimier Street in Cape Girardeau, the building is truly iconic.

Still considered the frontier and on the edge of the West in 1854, Cape Girardeau’s history paralleled the use of the courthouse. Its path was well-documented in the 2010 application to join the National Register of Historic Places and in the printed articles that appeared in the Southeast Missourian, used as resources in this writing.

The well-known local builder Joseph Lansman is credited with the construction of the original courthouse in 1854, with additions designed by St. Louis architect Jerome B. Legg in 1888 and noted local architect John Boardman in 1959 that extended the rear annex 30 feet. The original design of the courthouse is a 19th-Century vernacular style with strong Federalist influences and details. The additions in 1888 of the side wing and cupola tower give the Common Pleas courthouse a Classical Revival appearance, which it retains despite the 1959 addition. Those will remain in the renewed building.

Leading to the building from the picturesque east side are steps that were originally made of sandstone but were replaced with cement in 1900. These cement stairs are commonly believed to be the first concrete construction south of St. Louis and are often seen in early postcards and photos throughout the history of Cape Girardeau.

Events that defined the use of the Common Pleas courthouse

Shortly after the construction of the courthouse, the Civil War erupted and the building served as a military headquarters, a prison for Confederate soldiers and southern sympathizers, and a hospital. Most importantly, for the war effort, the courthouse served as the headquarters of the provost marshal.

Dating back to the Declaration of Independence in 1776, normally in the Army, provost marshals oversaw military discipline. It was on August 30, 1861, after the Battle of Wilson’s Creek in Springfield, that General John Fremont declared martial law in the region and Cape Girardeau became the southernmost point of the Union territory, and thus the front line of the Civil War in Missouri. The newly-constructed Cape Girardeau courthouse and prison cells, previously housing the civil authority, became the home of the provost marshal, giving the post instant credibility to oversee law. Lasting until 1866, Missouri was one of the last states in the country to be under provost law.

Beyond its historic judiciary and city function, its picturesque 4.6-acre courthouse grounds have always been an admired setting for gatherings, local entertainment, community events and a site for numerous memorials.

In the period of after the Civil War, steamboat races occurred up and down the Mississippi. One well-known race was between the steamers Natchez and Robert E. Lee in 1870 when the Common Pleas courthouse lawn set numerous bonfires to help guide the two steamboats in their race to St. Louis.

The grounds also hosted many politicians: it was the backdrop for the visit by President William Howard Taft’s 16-vessel flotilla in 1909, considered the biggest flotilla of prominent politicians. A young Franklin Roosevelt arrived in Cape Girardeau in 1920 to deliver a speech on the courthouse lawn. And years later, Harry S. Truman spoke at a rally on the courthouse grounds when running for Senate in 1940.

But mostly, the courthouse grounds served — and to this day serve — as a gathering place for local campaign speeches and rallies and a place for religious expression, music and a variety of public events and standing memorials.

Aside from the courthouse, the Cape Girardeau’s Carnegie Library built in 1922 served as one of the city’s most significant public buildings.

Although the Carnegie Foundation stopped accepting proposals for the new libraries after Andrew Carnegie’s death in 1919, Cape began its negotiations prior to World War I. The foundation honored its commitment with a $25,000 donation and $5,000 match by the City. Until its relocation in 1989, the Library was a much-beloved institution and building, including its 1959 addition by locally-celebrated designer John Boardman in his signature Mid-Century Modern style. Boardman was also the architect behind the 30-foot westward expansion of the courthouse in the same year. 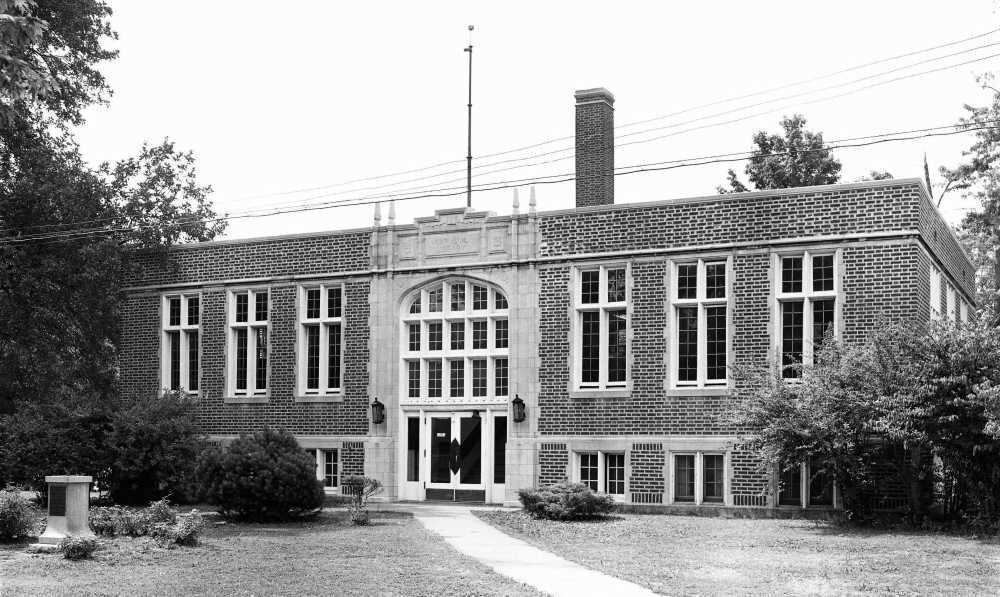 A look at what’s to come

The front portico featuring four Tuscan columns will remain; the concrete stairs leading up to the building will be replaced. The cupola that tops the roof, also added in 1888, will continue to overlook the river. Its Romanesque Revival styling will get a facelift, returning to its original state with arched windows and repeated round arch motif. All together, these classical design features will continue to give the building its dignified and majestic presence for all to enjoy as the new home of the Cape Girardeau City Hall.

Although a beautiful example of Mid-Century design, the Boardman addition to the Carnegie library will be removed and the expansive windows will return to a sunlit workspace for City planning and engineering. The surrounding northwest grounds, fountain and gazebo — recently renovated — will not be altered. 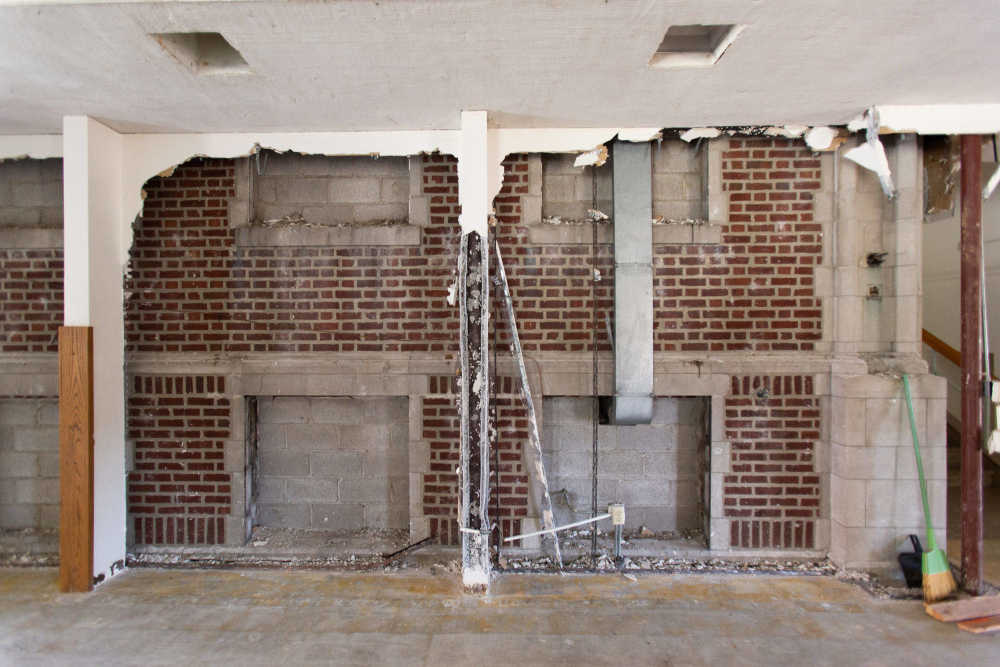 The original facade of the Carnegie Library is revealed as walls are removed during the demolition phase of the Common Pleas Courthouse renovation on Tuesday, June 16, 2020.

Connecting the courthouse with the library-turned-city-annex will be a new building designed by TreanorHL in partnership with Penzel Construction. This follows several iterations in design, guided by the Secretary of Interior stating any new structure shall not mimic the old, sit back from the old and also find its own architectural style to complement the two stylings of the historic courthouse and library. According to Penzel, this will be achieved by a building built on its own foundation that “softly” touches the courthouse with expansive windows and eastward-facing views of the downtown, river and bridge, bookended by entrances from a new, two-level parking building from the southeast and angled entrance from the northwest to attach the upper courthouse lawn with the side buildings and parking.

“This is the tricky piece,” says Steven Hoffman, coordinator of the historic preservation program at Southeast Missouri State University. “What they have to do is design an addition to both the courthouse and library representing different periods and tie them together in a way that really works, a tricky thing to accomplish. I know a lot of people were expecting red brick; I think a red brick connector would have been very heavy and clumsy. Because it is hard to balance both of the buildings effectively, the lighter material they chose is more transparent, allowing it to have a light touch on either side. This gives a lighter, open-air feel so that it is not weighted down, allowing it to exist as its own structure connecting two historic buildings. It does a nice job.” 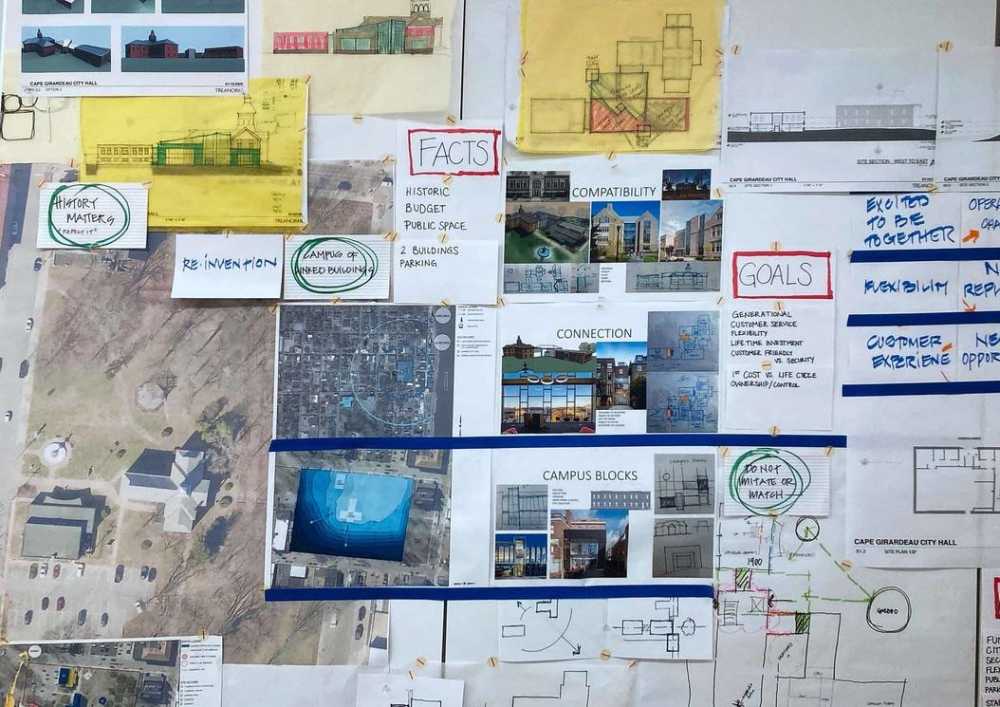 Pictured here are conceptual mood boards created by the design firm TreanorHL and Penzel to explore solutions that unite two existing structures with a new structure. The plan seeks to respect history while offering a forward-focused solution around accessibility, security and functionality as a new City Hall, keeping the seat of downtown in Cape Girardeau where it has always been.

How the past links to our future

The future does reflect our past. Immigrants to Missouri brought with them many traditions and methods of building construction that focused around simple tools and materials. Now, some five generations later, Phil Penzel and his builders shepherd the next chapter.

“It is an important investment on part of the community and city government that represents the community in our downtown,” Hoffman said. “It is the heart of who we are. When the future of the courthouse and all that property was in doubt, it seemed important to retain a public function.

“Place matters. By making this significant investment, we are moving forward in a direction that invests in our next 100 years. It is not just about a building today, but a building that spans the 19th, 20th and now 21st Centuries. It is a generational project, something really good for the city and downtown, and good for all of us as residents of Cape Girardeau.”

We can’t wait to chronicle its next chapter in history. 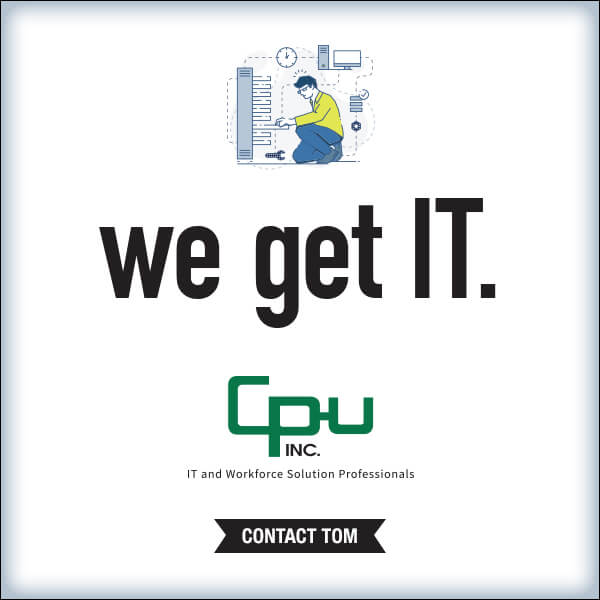