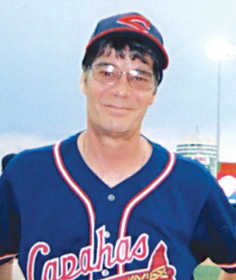 The recent coronavirus situation has introduced a concept foreign to most people: social distancing, or keeping a minimum distance between individuals in order to reduce the spread of the disease. Being social animals at heart, many had problems adjusting to this new situation.

Not me. I’ve been practicing for this my whole life! Actually, I’m not practicing anymore. I’ve pretty much got this down.

Yes, as a rural resident for most of my adult existence, I’m pretty used to being alone, or very nearly so. Friends know they can see me when I come to town for something, which is admittedly inevitable. As a result, I get remarkably few visitors during the course of a year. Single digits, usually.

Oh, I’ve been around crowds in my day. Concerts, particularly. Especially the 1982 Elton John Fourth of July concert under the St. Louis Arch, supposedly attended by more than 1 million people. I actually worked my way down to the very front row with a small friend on my shoulders in order to take some great pictures. We were close enough to yell at Elton to smile for a photo, which he eventually did.

But most of the time I’m mostly alone, which certainly has its benefits. For one thing, you can dress (or undress) any way you like, similar to what many people working from home are experiencing. It’s certainly a feeling of freedom, wearing whatever you want.

However, many younger folks undermine the whole point of being alone by putting themselves on Zoom or whatever, showing everyone how they’re in their undies at 3 p.m. The whole idea of this pajama parade is to protect privacy, not to pursue prurient interests. Get an unlife, people!

Another solace of a solitary situation is that you can eat anything you want, no matter how strange it may seem to others. In one “Andy Griffith” episode, Andy gets pickled avocados, shrimp enchiladas and other uncommon comestibles when he’s home alone “batching it.” But he never undermined his efforts by posting his meals on social media, as is the current custom. If I want to eat peanut butter directly from the jar or squirt whipped cream right into my mouth, I really don’t need anyone else to know about it.

My best friend Tony has responded to the corona crap by drinking more heavily than usual, as have many others. He’s introduced the concept of the “quarantini,” which basically covers any martini-type cocktail. I’ve been playing a version of “stump the band” with him, in which I suggest a ridiculous-sounding drink, and he finds a recipe on the Internet almost immediately. For example, there was a Prince tribute concert recently. I asked him to come up with a “Purple Raintini,” and a “Raspberry Beret.” He came up with both almost instantly. After he came up with several other unlikely drinks, I finally suggested one he couldn’t come up with: Chicken Kiev. That was sort of cheating by me, however.

This pandemic pandemonium hasn’t been limited to our country, of course, and some areas are having more trouble than others. Regular readers know that I go to Argentina annually, where they love to hug each other all the time. Somewhat scandalous to a Scandinavian (I’m part Danish), I nevertheless have adjusted to this situation. It’s not sexual at all; men hug each other as often as the opposite sex. They just love physical contact, and the current crisis prevents perpetration.

But I’m pretty happy being mostly alone, and it’s certainly helped me keep healthy. In the meantime, while this stuff is still going on, I’ll just give you a “Newhart hug,” which Bob Newhart used to do with certain people such as in-laws. You just nod left and right from a distance, while the recipient does the same. And have a quarantini on me! Light on the virus vermouth, please.