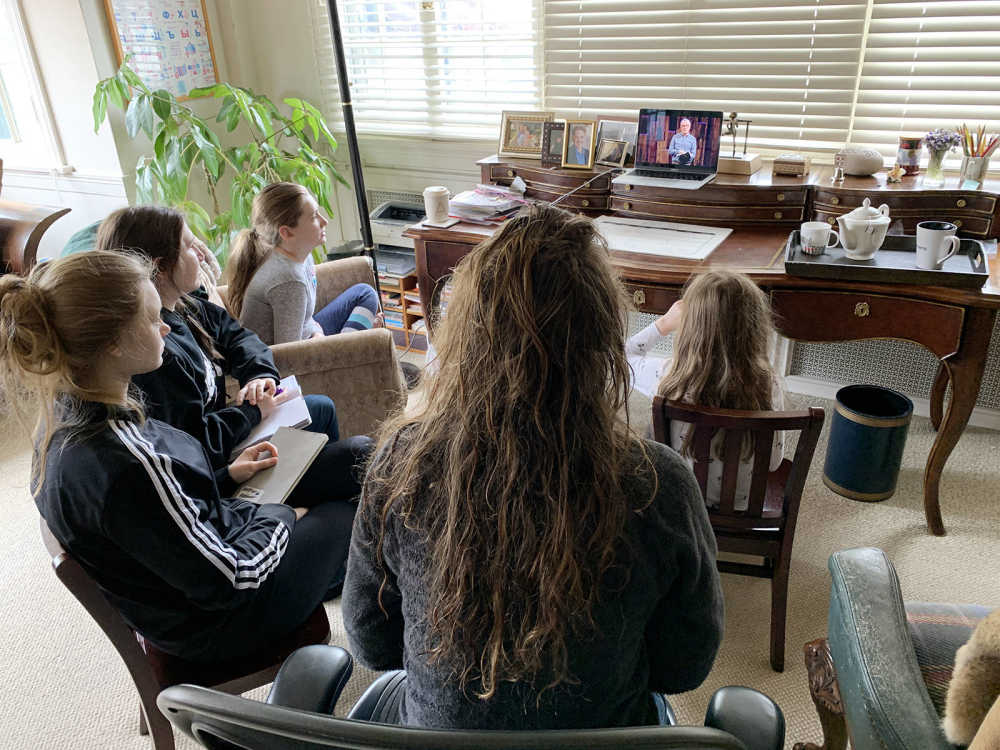 The Rust girls participate in an online service with LaCroix Church in Cape Girardeau, Mo.

Governor, will I be able to play the violin in front of crowds after the coronavirus lockdown?

Great, I never could before.

Having teen and preteen daughters means a lot of music in the car. And two of my favorite games while driving involve musical challenges.

The first game is a variation of "Name that Tune." I play songs from my smartphone's playlists that all four girls are familiar with (going back to toddler years) -- with each vying to identify the song title first. I might play the first chord or stanza, only letting the music continue longer if needed. It never ceases to amaze me how fast -- and in such few notes -- they can identify most songs. From Broadway musicals like Hamilton, Dear Evan Hansen and Les Miserables to Russian pop (my wife is Belarusian), Disney songs, and some of the latest hot (but clean) tracks.

The second game is one of those brilliant daddy creations. The four girls pass my phone around, each selecting a song in rotation. The goal: Being named the winner, judged by moi, for selecting the best songs. After each song plays, I give an update on the standings using my best overexcited announcer voice.

Over the years each of the girls has determined a strategy.

The youngest tends to select dramatic but short songs that have scored well in the past. If something propelled her into first before, she's going to use it again. Since she's only 7-years old now, she actually started the game before being able to read, picking songs by their album covers. Every now and then something totally unexpected emerges, and the novelty will be delightful. For example, "Mission Impossible" or "The Devil Went Down to Georgia." This girl has a flair for breaking up the expected with the perfect surprise.

The next youngest is a sentimentalist, who tends to choose songs with special meaning to me, quite often being songs that represent different times when she or the others were growing up. "Green Leaf on the Ground" by Lorie Henriques is the kind of wistful melody that slows things down and never fails to tug at my heart. She is also the one who pays attention when I share music "from my college days," and then selects some of my favorite oldies when it's her turn in the competition. She is beautifully devious that way!

The next one is my fearless adventurer. She plays piano. She sings. And she loves music, especially new tunes discovered with friends. She finds it exciting how a not-yet-famous musician weaves in new innovative sounds and rhythms. She scores well in the competition by picking from the best of the newest songs -- but not pop music -- according to what she thinks I will like most. Her selections thus display a talent for identifying good new music and understanding her audience.

And, then, there's the oldest: soon-to-be-16 Anya, who is the sweetest, most pleasing, servant-hearted child anyone could dream of. Except when it comes to choosing music in the car. Early on, Anya determined the best way to win this game was to ignore the judge and choose whatever she wanted. At least one of four songs played each round would be exactly what she wanted to hear. This can entail a lot of woo-woo teenage girl melodies. Selfish? Brilliant? You decide. But she's happy.

For a few years the girls scored a lot of first-place ties, with one in first-first place and others "very close behind." No harm in stroking all of them for selecting music I loved to hear. That's the daddy genius. Where the magic is wearing off is that more and more, Anya's strategy is starting to seep into the others, and the excitement of "competition" is starting to devolve into just "enjoying the music." Oh well, it was fun while it lasted.

Which, finally, brings me to what I intended to write about when starting this column. My girls also love singing in the car. Or around the dinner table. Or while studying. Or walking. Or playing on their own. Or ... pretty much anytime. Same with their mother, who has a beautiful, beguiling voice. Meanwhile, let me set the scene when I sing in the car.

This doesn't happen when one of them or all of them are singing. Only when I join in does the common urge for turning on the radio appear.

This past weekend, we were worshipping online again, and our church LaCroix has truly amazing praise leaders: World class! The problem is, standing in my wife's office at home, watching her computer and singing to the lyrics, I can hear myself really well now. That wasn't the case in our church's large sanctuary when, one time, the woman in front of us turned and said, "I just love when people sing exuberantly."

My wife has been kindly asking me for years not to sing into her ear, even though she also loves when I hold her from behind when standing and worshipping. And I can still remember my friend Shannon Roper telling me in first grade, "Jon, you know you can't sing, don't you?" Or John Lohr, a friend in middle school, encouraging me: "Jon, you can probably do whatever you want in life. But you will never make it as a singer."

I have previously realized that chanting fits my sense of key best (and my wife still finds it amusing -- or is it maddening -- that I hold onto Tibetan monk chant CDs from college). But for the past few years at church, I've really felt comfortable to belt it out. Exuberant, indeed!

Will Covid get me down, causing me to moderate the singing a bit, now that I can hear myself clearly? Will I be one of those wimps who changes his habits just because of a virus that's invaded?

Yes. Yes, I will. And if you heard me sing, you'd probably be cheering. Or at least, asking to play a music game instead.

On a side note: Happy birthday to my dad Gary W. Rust. He turned 85 on Monday and is doing great. Many in my family gathered for a socially distanced birthday picnic with him on Memorial Day. Other siblings, who had originally planned to travel to Cape before the pandemic disrupted so much, sent messages and gifts. I know few people as principled, generous, loyal, curious and wise. Nor, a couple more loving and charming than he with my mom. This year they celebrate 65 years of marriage. Congratulations Dad! (By the way, he can sing! Sad I didn't inherit that characteristic.) 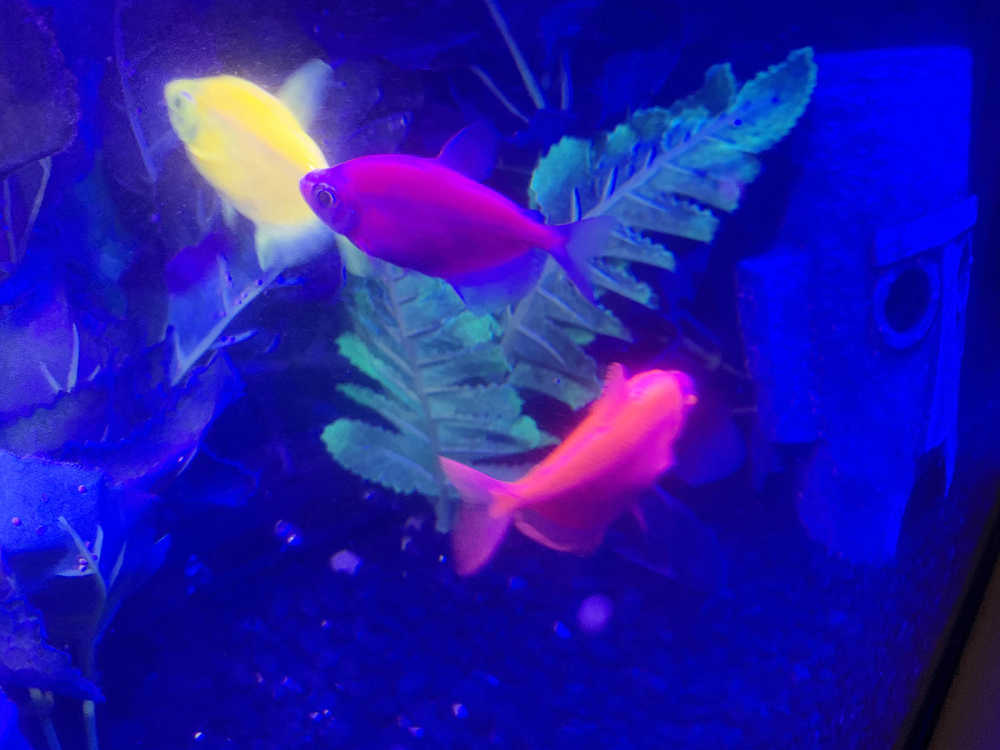 Is it COVID-related that my fish just started talking to me?
Jon K. Rust
I'm pretty sure my fish started talking to me this week. I was feeding them, wondering how they liked being stuck within the same four walls all the time, and a voice piped up: "Not bad, Papa. We have short memories. And the food is good." Yes, one of them did call me "Papa."...
More from this columnist · Jon K. Rust