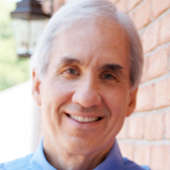 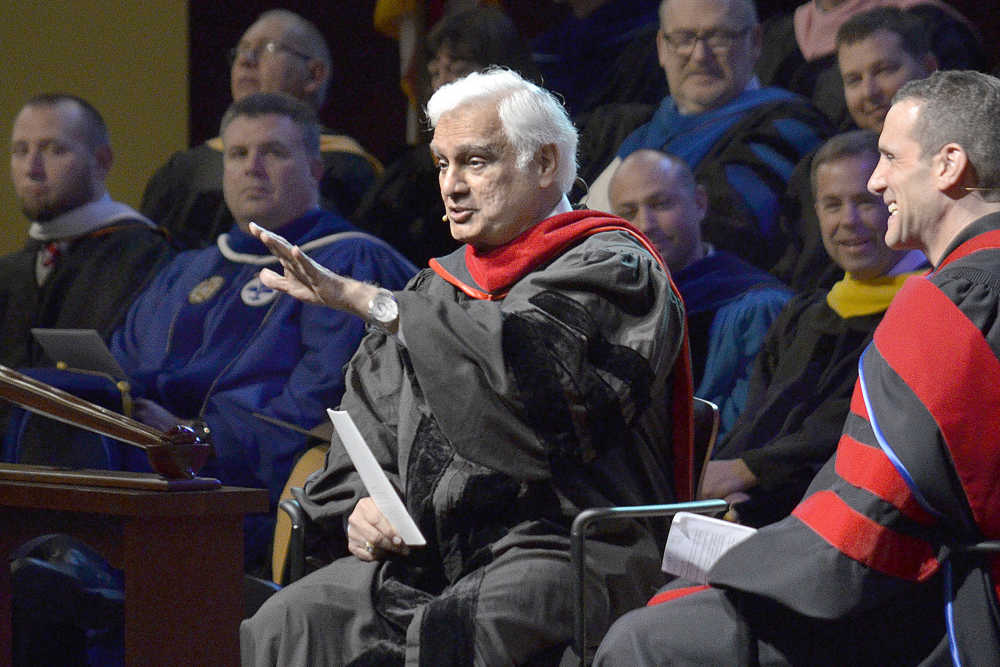 FILE - In this March 30, 2016 file photo, Christian apologist and author Ravi Zacharias, left, talks with associate professor Lenny Luchetti during the Society of World Changers induction ceremony at Indiana Wesleyan University in Marion, Ind. Zacharias, who built an international ministry that strives to defend Christianity on intellectual grounds, has died in Georgia. Zacharias died Tuesday, May 19, 2020 at his home in Atlanta after a brief battle with sarcoma, Ravi Zacharias International Ministries said in a statement. (Jeff Morehead/The Chronicle-Tribune via AP, File)

Three short months ago, I received an encouraging text from my friend Ravi Zacharias. Now, as if in a blink of an eye, he has passed away. Along with countless thousands, I grieve.

When he wrote, he was reeling from excruciating back pain but wholly unaware of the cancer diagnosis that would soon follow. Despite his suffering and his onerous schedule, he shared that he was praying for my brother, Rush, who had just been diagnosed with cancer.

Ravi was a unique Christian apologist and evangelist -- a giant in his field. No one presented the Gospel more cogently and winsomely than he. Though gone from this Earth, his legacy and his indispensable ministry, Ravi Zacharias International Ministries, or RZIM, will continue in the abundantly capable hands of his wife and ministry partner, Margie Zacharias; their three children, Sarah Zacharias Davis, Naomi Zacharias and Nathan Zacharias; and so many other amazing Christian apologists.

I first became aware of Ravi before I was a believer and when I was still struggling with doubts. I watched in awe as he explained during a television interview Christianity's basic truths in a way I had never heard. He exuded a confident mind tempered by a humble heart.

I remember thinking to myself, "Wow, I'd like to see any Christian skeptic listen to this man and dare claim that intellectuals can't be Christians, or that Christians can't be intellectual." He was so obviously a deep thinker and gifted communicator. This brief exposure to Ravi was one of the pivotal seeds planted on my path to faith in Christ.

Ravi's faith journey began when, at age 17, he found himself in a New Delhi hospital recovering from a suicide attempt. Someone read him Jesus' words in the Gospel of John: "Because I live, you will also live." At that moment, he immersed himself in prayer, promising God that if he were to leave the hospital, he would vigorously pursue truth. Upon discovering the truth of the Gospel, he spent the rest of his life fulfilling that pledge.

Ravi had a heart for defending the faith against challenges and taking the Gospel to unbelievers. He firmly believed that we are called upon to love the Lord not only with all of our heart, soul and strength but also all of our mind, as Jesus instructed. Contrary to cynics who dismiss Christianity as anti-intellectual, Ravi knew Christianity's truth claims could withstand the scrutiny of rigorous intellectual inquiry, and he devoted his life to demonstrating it.

He knew you couldn't argue someone into the Kingdom of God, but he recognized that certain questions plagued doubters and that answering those questions was often an important step in removing obstacles to faith. He took seriously the Apostle Peter's admonition: "But in your hearts revere Christ as Lord. Always be prepared to give an answer to everyone who asks you to give the reason for the hope that you have. But do this with gentleness and respect" (1 Peter 3:15).

Unlike some, Ravi didn't ignore the last part of Peter's teaching. He always approached doubters with grace. It is sheer joy to watch internet videos of his many question-and-answer sessions with university students. In every encounter, Ravi treated skeptics as he would a lifelong friend whose eternal destiny was his driving concern. You could see God working in these exchanges, which were never contentious and were always overflowing with good cheer.

The purpose is never to win a debate or humiliate the questioner. It is to offer the questioner a rationale basis for our faith in Christ. We must try to understand that person's mindset and tailor our response to meet him where we find him.

As brilliant as Ravi was, he knew that even the best of finite human minds could not fully comprehend the infinite mind of Christ. He marveled at the story of Jesus explaining the Scriptures to men on the road to Emmaus in one of His resurrection appearances as "their hearts burned within them."

"Who would not like to interview Jesus Christ?" asked Ravi. "It is not possible to live without asking questions -- and what better source for the answers than the one who claimed to be the Way, the Truth and the Life? If one could only be face to face with Him from whom life comes, whom to know means Truth and to follow means direction, how delightful would be those moments when the most confounding questions of life are raised."

Ravi is now face-to-face with His Savior, who he can approach directly with any remaining questions. As I contemplate this glorious scene, it warms my heart that Christ will meet the wonderful Ravi Zacharias saying, "Well done, good and faithful servant." Amen.

David Limbaugh is a writer, author and attorney. Limbaugh resides in Cape Girardeau.

More from this columnist · David Limbaugh