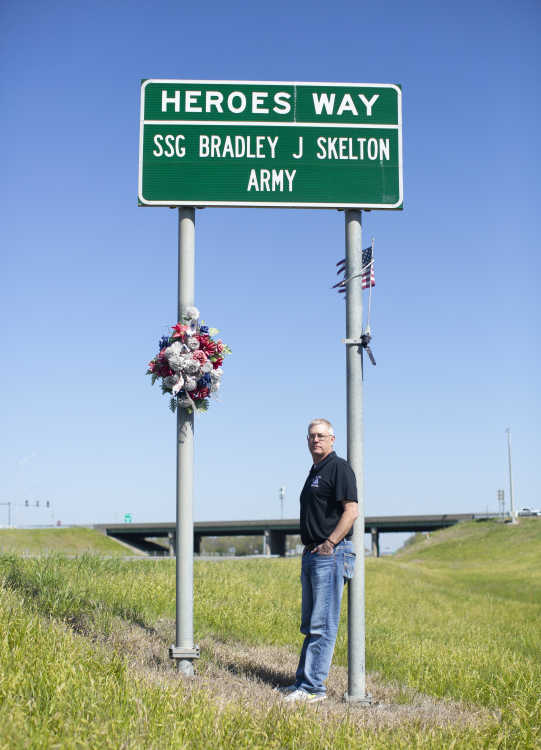 Ross Gartman stands with a sign honoring his friend Bradley Skelton at Exit 96 on I-55 in Cape Girardeau on Saturday, April 18, 2020. After Skelton was killed by an improvised explosive device while serving in 2008, Gartman worked with then Senator Jason Crowell to come up with the Heroes Way program.
AARON EISENHAUER
Order this photo 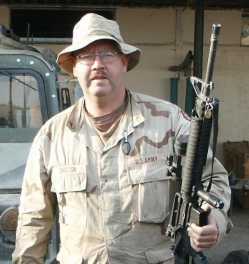 Bradley Skelton from Gordonville served two tours of duty in Iraq as a sapper, or engineer who cleared routes, destroying bombs. His first deployment was with the 1140th Engineer Battalion in 2004, and he came out of retirement for his second tour in July 2007. Skelton was killed by an improvised explosive device while serving in 2008; it is in his honor that Ross Gartman created the Heroes Way highway sign program to commemorate soldiers who gave all.
Submitted photo.

There is a small stretch of road along highway I-55 that is very special. Every day, commuters drive by it unaware. Maybe you have, too. If you look closely, a few feet away from Exit 96 in either direction, you’ll see it: a sign with the words “Heroes Way.” This sign and others like it commemorate the ultimate sacrifice of our fallen U.S. servicemen and servicewomen.

You can find these signs across Missouri, but the one near exit 96 is even more special. This one — often adorned with flowers and an American flag — belonged to Army Staff Sergeant Bradley Skelton. Without Skelton’s sacrifice, Heroes Way signs wouldn’t exist at all.

Bradley Skelton was born and raised in Gordonville with his sister, Carmen (now Carmen Robinson). Even from her earliest memories, Robinson remembers her brother as a selfless person with a wonderful sense of humor.

“Whatever you needed, he was happy to help,” Robinson says. “He could help you with anything.”

Skelton served two tours of duty in Iraq. His first deployment was with the 1140th Engineer Battalion in 2004. He came out of retirement for his second tour in July 2007.

“He was a sapper — an engineer that cleared routes, destroying bombs,” Robinson says. “He came out of retirement because he knew his experience could help others.”

In short, Bradley Skelton was a hero.

In February of 2008, Skelton was killed when his vehicle was struck by an improvised explosive device. It was a tragic and unfitting end to someone who had much more to give the world. Skelton’s death, however, was not the end of his story.

In the months that followed, a close friend of Skelton’s was determined to find a way to memorialize his honor and service. That friend was Ross Gartman.

“Originally, I tried to get an Army barracks named after Brad,” Gartman says. “I went to high school with [then Senator] Jason Crowell, so I reached out. We got to talking about Brad, and we came up with the idea for highway signs together.”

Shortly after, the Heroes Way Designation Program was passed in the Missouri State Senate with overwhelming support. The program allows families of a fallen soldier to apply for a memorial sign and have it placed near their hometown.

Since 2009, Heroes Way signs have begun to dot Missouri interchanges along I-55, 1-70, 1-44 and beyond. What started as a way to remember a friend quickly grew into something more.

“Everyone’s got a story,” Gartman says. “Everyone.”

Often when Gartman speaks in public about Heroes Way, someone will come up after and tell their own story of loss and service. The more families he meets, the more connected he feels to them. No other time is that clearer than during the unveiling ceremonies for new memorial signs.

“Those first few unveilings were very moving. One of them was for [Army Sgt.] Robert Davis. I remember getting emotional during his ceremony. I was having a hard time getting through it when his [4-year-old] son, Brayden, came up to me in front of everyone and wanted me to hold him. I said, ‘Brayden, you are a lifesaver.’ Those moments will stick with me forever.”

The Heroes Way program is a wonderful opportunity for families to honor their loved ones. However, it’s not perfect. The biggest hurdle for many wanting to apply is cost. Currently, the signs are not free. MoDOT places the full $3,200 cost burden on the families, which is something Gartman has been adamantly against.

“I was so ticked off that they make the families pay for those signs,” Gartman says. “As far as I’m concerned, they’ve paid for those signs already.”

To get around this, Gartman created Heroes Way, Inc., a nonprofit organization dedicated to helping families with the application and funding of memorial signs. Gartman has also been actively working with the Missouri Legislature to expand the program and make it more accessible.

Every year, Heroes Way, Inc. helps between six to 10 families from across Missouri. The organization’s primary source of income comes from its fundraising events, including an annual dinner auction. But Gartman doesn’t view these events as a chore. In fact, he looks forward to them.

“It’s such a wonderful time,” he says. “It’s 50 gold-star family members coming together, laughing and supporting each other. It’s such a joy and a blessing that I get to be a part of this.”

This is a sentiment shared by Robinson, who is also in regular attendance.

“I always try to go to the Heroes Way events,” she says. “They’re awesome to see. And they get bigger every year.”

Through this amazing organization, Robinson and Gartman have found more than a way to remember what they’ve lost. They’ve found a new extended family — a community of love and support.

Everyone has a story. And Bradley Skelton’s story is just beginning.