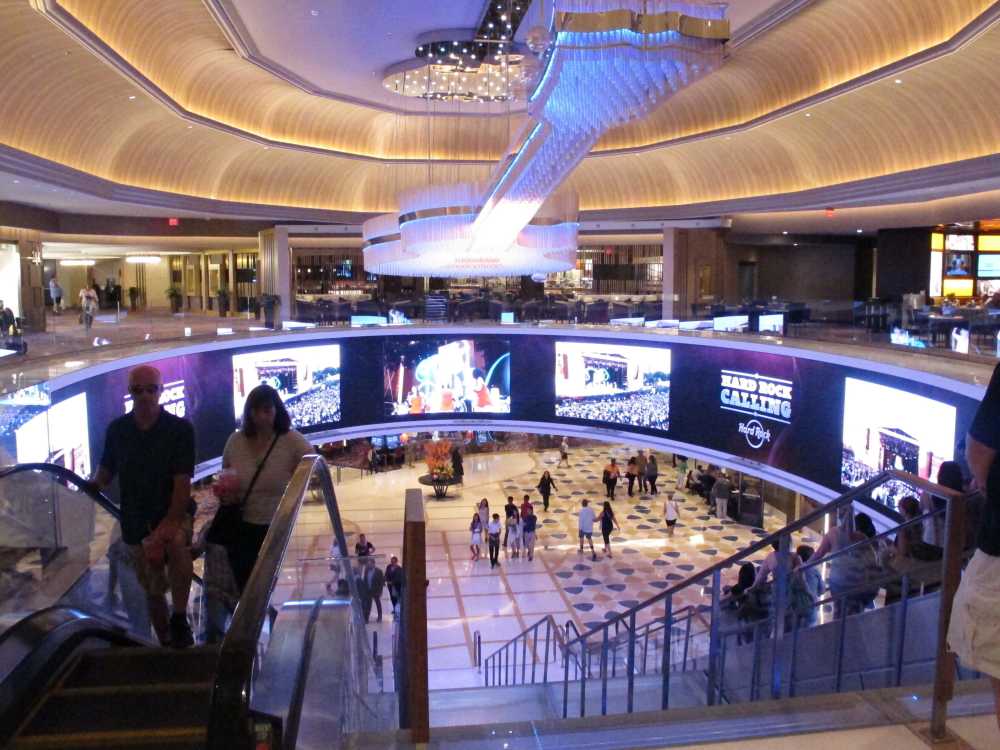 FILE - This June 20, 2019 file photo shows the lobby of the Hard Rock casino in Atlantic City, N.J. On Friday, March 13, 2020, Hard Rock announced it is canceling live entertainment at all its U.S. properties for 30 days in response to the coronavirus outbreak, one of many steps casinos around the country are taking in response to the outbreak. (AP Photo/Wayne Parry)

ATLANTIC CITY, N.J. -- Gamblers and vacationers who had planned to visit U.S. casinos expressed a mixture of disappointment and relief over a wave of closings in at least 15 states as officials worked on slowing the spread of the coronavirus pandemic.

Some said they still plan to visit casinos.

Many casinos, where hundreds or even thousands of people touch the same slot machines and gambling chips, remain open. The casinos that remain open say they are stepping up cleaning and sanitization efforts.

Sherry Giordano, an Atlantic City casino regular from Willow Grove, Pennsylvania, has a trip booked for this weekend that will be canceled. But she would have been hesitant to go even if the casinos had been open, because of her husband's health history that could make him more susceptible to the virus.

"I'm less concerned with my own safety, and I think a lot of people have a tendency to think that way, which is both kind of stupid and selfish because we can endanger others," she said. "I not only love gambling, I love meeting people and escaping reality.

"Atlantic City is very important to me and my husband," she said. "But I think it's the right thing to do. I would rather err (on the side of) caution rather than jeopardize a life."

For most people, the virus causes only mild or moderate symptoms, such as fever and cough. For some, especially older adults and people with existing health problems, it can cause more severe illness, including pneumonia, and death. The vast majority of people recover.

Tom Brown, of Edison, New Jersey, canceled a Las Vegas trip last week, and then canceled the rebooked trip for late March that would have replaced the first one. He acted because of concerns over the potential for the virus to sicken his wife, who as a cancer patient undergoing infusion therapy has low resistance.

"We will likely wait several months before considering another casino junket," he said.

Troy Wildasin, an Emmaus, Pennsylvania, casino patron, said that even in the best of times, the sanitary state of casinos left a lot to be desired.

"Not only would this help the chance of decreasing the virus outbreak, but this will also give the opportunity to give the casinos a fresh cleanup," he said. "There is not one casino, regardless of city, that is clean. Hard to do properly when they are open 24/7."

Michael Magbaleta, of Jersey City, New Jersey, frequents casinos in Atlantic City, Las Vegas and Pennsylvania but said he won't be going in the near future.

"I'd feel a bit antsy and paranoid going on a casino trip now," he said "As it is, Wind Creek at Bethlehem, Pennsylvania, closed down, and they have a huge customer base traveling from New York City to that resort. I'm glad they are taking extreme measures to protect the employees and public."

"I am not comfortable going to any casino any where in the world right now," she said. "It makes me sad, but I would rather myself and my 80-year-old mother stay alive and not spread anything to anyone else. I am glad the casino here in Toledo closed, and I'm happy the ones in Detroit closed because if they hadn't, my mom would be trying to get me to go."

Don Battista of Austin, Texas, had been due to fly to Laughlin, Nevada, this week, but has since thought better of it.

"Our group decided while we are not elderly, and all healthy, it would be irresponsible to possibly spread to someone in that danger range," he said.

"We still plan on going unless they stop the planes from flying," she said. "Just use common sense. Wash your hands, and use sanitizer."

The shutdowns could be a boon to casinos in states where internet gambling is legal, including New Jersey, where online gambling revenue has been soaring for years.

On Monday, New Jersey Gov. Phil Murphy ordered the closure of Atlantic City's nine casinos as of 8 p.m., after days of allowing them to remain open. The governors of New York and Connecticut did likewise, also including bars, restaurants and movie theaters.

It will be the fifth time that Atlantic City's casinos have shut down since gambling began here in 1978; only hurricanes and a government shutdown have caused such closures before.

The Associated Press receives support for health and science coverage from the Howard Hughes Medical Institute's Department of Science Education. The AP is solely responsible for all content. Follow AP coverage of the virus outbreak at https://apnews.com/VirusOutbreak and https://apnews.com/UnderstandingtheOutbreak. Follow Wayne Parry at http://twitter.com/WayneParryAC.