The following story has been submitted by a user of semissourian.com. To submit your own story to the site, click here.
User-submitted story by Dorothy Meyer 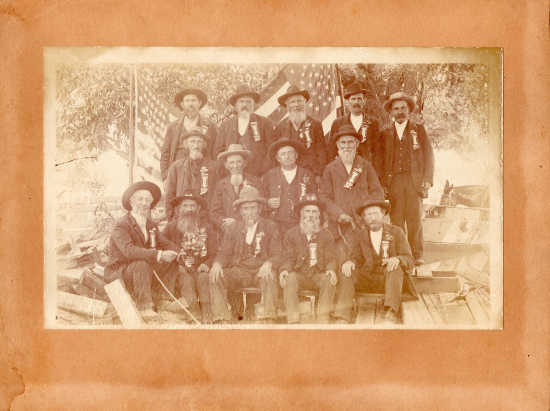 This group of men having served in the Civil War, joined the Grand Army of the Republic (G.A.R.). The ribbons that this group of men are wearing has printed on them, Appleton, Post No. 365, Dept. of Mo.. On this group picture, you can see that several of these men are wearing this G.A.R. pin in their hats. We believe that: John Winkler is 4th from the left in the first row. Frank Winkler is 2nd from the right in the back row. The original picture was hanging on my Grandma Victoria (Unterreiner) Wucher's upstairs bedroom wall. This leads me to believe that there must be family in this photo, either Unterreiner or Wucher. Can anyone else help identify these men? Do you have any information about them or this G.A.R. group?

Jonell McNeely identified the man standing in the back row, second from left, as Casper Ludwig, who was a brewer at Old Appleton. She believes that the two men standing to his left and right may be his son and brother.