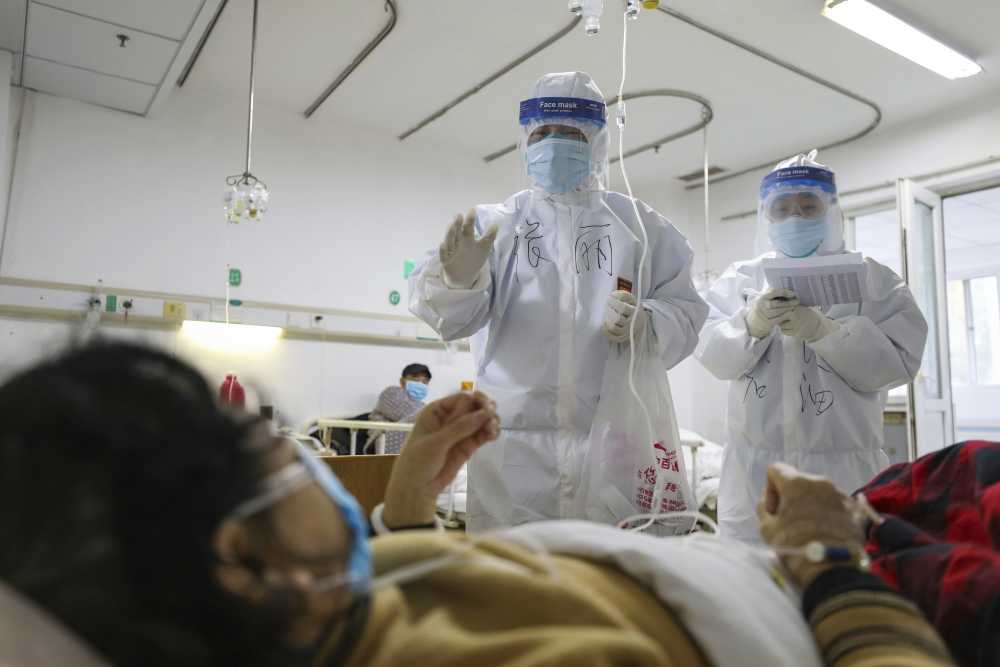 Medical workers check on the conditions of patients in Jinyintan Hospital, designated for critical COVID-19 patients, in Wuhan in central China's Hubei province Thursday, Feb. 13, 2020. China on Thursday reported 254 new deaths and a spike in virus cases of 15,152, after the hardest-hit province of Hubei applied a new classification system that broadens the scope of diagnoses for the outbreak, which has spread to more than 20 countries. (Chinatopix Via AP)

BEIJING -- China reported a surge in deaths and infections from a new virus Thursday after changing the way the count is tallied, further clouding an epidemic that has stirred fear as it spread to more than two dozen countries.

The spike came after two days in which the number of new cases dropped and brought little clarity for those desperate to understand the trajectory of the outbreak.

"What we need is some consistency over time to give us an idea of what's actually happening," said Dr. William Schaffner, an infectious disease expert at Vanderbilt University in the United States. "Is transmission happening or is it not?"

The answer has proved frustratingly elusive despite the official reports.

Dr. Michael Ryan, the World Health Organization's emergencies chief, said the dramatic increase was due to a revised way of counting cases and cautioned it did not represent a sudden surge in new infections.

"This increase you've all seen in the last 24 hours is largely down to how cases are being diagnosed and reported," he said, noting that the jump in infections refers to patients that go back days and weeks, including to the beginning of the outbreak.

China's National Health Commission said officials in Hubei province, whose stricken capital of Wuhan is the virus' epicenter, began tallying cases using a lower bar of "clinical diagnosis." That appears to count cases based on doctors' analyses and lung imaging rather than relying solely on laboratory test results. More than 13,000 of the newly-reported infections were a result of the new way of counting.

A spokesman for China's health commission, Mi Feng, said the change was aimed at identifying suspected cases in which the patient has pneumonia so they can be treated quicker and reduce the likelihood of more serious illness or death. It was also seen as a reflection of a chaotic crush of people seeking treatment and the struggle to keep up with a backlog of untested samples.

"Clearly in Wuhan, the health system is under extreme pressure and so the first priority has to be the patient," said Mark Woolhouse, a professor of infectious disease epidemiology at the University of Edinburgh.

In further clues to the desperate attempt to contain the virus and public criticism of the government's efforts, China replaced two more high-level officials -- the ruling Communist Party chief in Hubei and the party secretary in Wuhan. Those followed the sacking earlier in the week of two leaders of the provincial health commission and reports from state media of a slew of others expelled from the party for missteps related to the epidemic.

The public has widely criticized local officials for failing to respond quickly and decisively to the new virus. Authorities initially assured people that there was little to no risk of human-to-human transmission, a statement that was later retracted. Wuhan residents said hospitals were overcrowded and lacked sufficient medical supplies. Doctors who tried to share information early on were reprimanded by police for "spreading rumors."

"This is a society struggling with openness," said Schaffner. "For people like that who continue to be in positions of authority, to change their thinking must be difficult. So you have to be a bit skeptical when you see these changes in case definition."

Paul Hunter, a professor of health protection at the University of East Anglia in England, expressed similar frustration with the revised numbers, but said he believed it didn't represent a change in trajectory for the outbreak.

"I suspect but can't be certain that the underlying trend is still downwards," he said. "It almost certainly does not mean that there has been a resurgence of the epidemic overnight."

Still, in an unprecedented attempt to contain the disease, the Chinese government has placed the hardest-hit cities -- home to more than 60 million -- under lockdown. One district in Shiyan, a city in Hubei, has implemented "wartime measures," barring residents from even leaving their apartment compounds for two weeks.

A local government notice advised residents that basic necessities would be distributed and help would be provided to obtain medicine.

In Shiyan's Zhangwan district, Xu Min said the entrance to her neighborhood was being guarded by community workers and security staff.

"It doesn't have too much of an impact on our life, except that we're not allowed to go out," she said.

China is home to more than 99% of the world's reported COVID-19 infections, but the crisis has led other nations to implement travel restrictions and caused impacts to be felt far afield.

In Japan, a first death -- a woman in her 80s -- was reported, the third fatality outside of mainland China, following deaths in the Philippines and Hong Kong. And the health ministry announced 44 more people on a cruise ship quarantined in the port of Yokohama, near Tokyo, tested positive for the virus, bringing the total to 218.

In Cambodia, another cruise ship, the Westerdam, finally docked after being turned away by several Asian and Pacific governments. No cases of the viral illness have been confirmed aboard, according to the ship's operator.

And in Vietnam, official media reported that a village of 10,000 northwest of the capital, Hanoi, was put in lockdown due to a cluster of cases there.

Experts expressed hope that Friday could bring greater understanding of whether COVID-19 was growing or waning. Provided China continues to tally with the new method, it would give a chance for an apples-to-apples, day-to-day comparison.

"The real question is whether or not the trend, using the same criteria, is up or down," said Dr. Ian Lipkin, director of the Center for Infection and Immunity at Columbia University in New York.

Lipkin traveled to China to help researchers and public health officials in assessing the risk of COVID-19, and was marking his ninth day of home quarantine Thursday. He has tested negative for the virus and shown no symptoms, but looks with anticipation to the end of his confinement on Tuesday.

He plans to mark it, in public, with a dry martini.