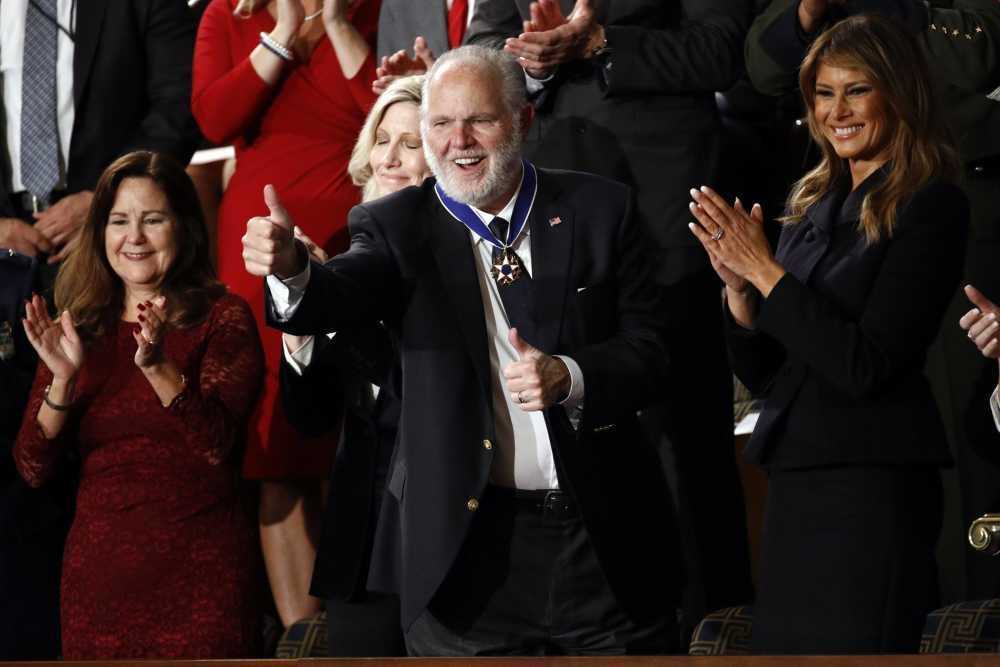 President Donald Trump recognized conservative talk radio host Rush Limbaugh with the Presidential Medal of Freedom last Tuesday at the State of the Union address. According to our research, Limbaugh is the first Southeast Missourian to receive the medal, which is described as the highest civilian award of the United States.

The Cape Girardeau native, whose radio show is heard by tens of millions of listeners daily, was called by Trump the day before the address. Limbaugh later told listeners he knew the medal was coming but didn't expect it to be bestowed during the joint session of congress. Overcome with emotion by the award, Limbaugh, who is currently battling advanced lung cancer, motioned to his heart how touched he was by the honor.

Previous recipients of the Presidential Medal of Freedom range from athletes and entertainers to artists, civil rights activists and faith leaders. In recent decades, it is not uncommon for recipients to have strong partisan opinions or to provide vocal and monetary political support to the presidents who bestow the award. Such recipients include Barbra Streisand, Meryl Streep, Charlton Heston, Oprah Winfrey, Joe Biden and more. The most recent Missourian to receive the award was beloved former St. Louis Cardinal slugger Stan Musial, who was recognized in 2011. In each case, the recipient usually excelled at something that influenced the fabric of the nation.

Limbaugh's voice has played a significant role in media over his 31-year career. Syndicated columnist Victor Davis Hanson wrote in National Review about how the conservative talker's trailblazing career uniquely paved the way for others.

"Perhaps the best clue is that Limbaugh was never just a talk-show host at all," Hanson wrote. "Or rather, he redefined the talk-radio three-hour format into something far more expansive than the critical arts of editorializing and answering impromptu listeners' calls. In his prime role as unyielding conservative explicator of the daily news without the filters of the Washington and New York commentariat, he combined the jobs of entertainer, stand-up comedian, psychologist, impressionist, satirist, provocateur, therapist, and listener to the nation."

In being inducted into the National Radio Hall of Fame and the National Association of Broadcasters Hall of Fame, Limbaugh was cited for saving AM radio in the United States. That's a mega-impact.

What many people don't consider about Limbaugh is his philanthropic contributions. Whether it's the Tunnel to Towers Foundation, Leukemia & Lymphoma Society or any number of other causes, Limbaugh has generously supported causes that transcend politics and make a difference.

Limbaugh is not without significant controversy. His humor -- especially quoted out of context -- can be damning. But who would have thought a young man from Cape Girardeau who started out simply loving radio would go onto win the nation's highest civilian award? It's the type of story uniquely American.