Epilepsy treatment side effect: New insights about the brain 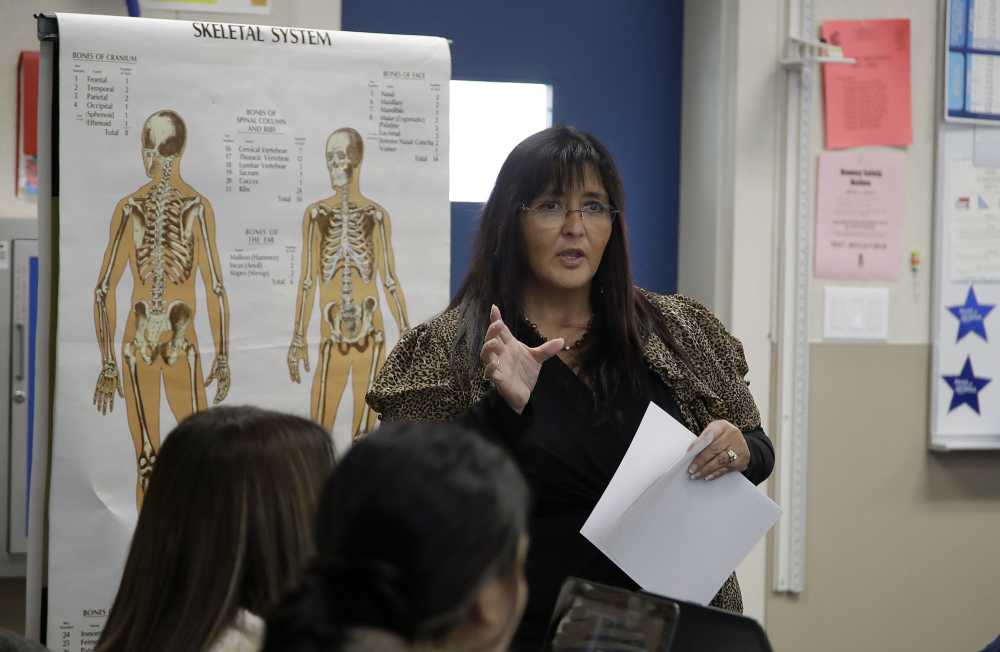 Teacher Ruth Nall speaks to high school students in her class in Modesto, California. Nall participated in a study reading sentences aloud as a network of surgically implanted sensors kept close track of how her brain worked. The monitoring of her brain provided data for several papers published in the past couple years.
Ben Margot ~ Associated Press

SEATTLE -- Though Genette Hofmann is still using her brain, last month she donated a bit of it -- to science.

Hofmann needed the surgery -- her Seattle surgeon was looking deep into her brain, where he found the trigger for the epileptic seizures that had disrupted her life for 30 years. But to get there, he teased out a bit of healthy tissue the size of a lima bean, and with her blessing quickly sent it to some researchers, who were eager to study brain cells while they were still alive.

That's how Hofmann joined a long line of epilepsy patients who've helped scientists reveal basic secrets of the brain -- knowledge that could pay off in better ways to measure consciousness in brain-injury patients and new treatments for a variety of diseases.

Research volunteers such as Ruth Nall, who made a different kind of contribution in a California hospital room, reading sentences aloud as a network of surgically implanted sensors kept close track of how her brain worked.

Since she was going to have electrodes implanted anyway, she reasoned, why not help out?

Epilepsy disrupts the brain's electrical activity, producing recurrent seizures that involve strange sensations, behaviors, emotions and, sometimes, loss of consciousness. Most people with epilepsy don't need surgery and can control seizures with medications. But when surgery is necessary, research scientists can ask to piggyback on the procedures for a rare chance to study the brain directly.

For decades, studies of epilepsy patients have revealed secrets of the brain, like how the two halves operate differently. And research with "H.M.," a now-deceased Connecticut man who's been called the most famous patient in the history of neuroscience, revealed key insights into how memory works.

The disease has a long history of revealing the importance of the brain to memory, emotion and everything we call the self, says Christof Koch, chief scientist at the Allen Institute in Seattle, where Hofmann's cells were analyzed. "Seizures have taught us more about brain and the mind, and the relationship between the two, than any other disease," he said.

Hofmann's brain cells were rushed to the institute on "life support" in a cooler rigged up with artificial cerebral spinal fluid and oxygen. At the lab, researcher Herman Tung sliced the pearl of brain into thin sheets for viewing with a powerful microscope, readying it for a three-part series of experiments.

After resting for an hour after slicing, Hofmann's brain cells were ready for their star turn under the microscope.

Researcher Katherine Baker found a single brain cell and recorded its electrical activity. She injected dye that spread into the threadlike dendrites of the neuron to reveal its shape.

Baker removed the cell's nucleus for the third step: a readout of which genes are turned off and which are turned on.

About three-quarters of such donations at the Allen Institute come from epilepsy patients; the rest come from cancer surgeries. The Allen Institute is building an online atlas that makes information on hundreds of human brain cells freely available for study. The institute hopes that will provide a new avenue, beyond brain scans and animal studies, for tackling conditions such as Alzheimer's disease and autism.

For Hofmann, 57, the decision to contribute to the study was simple, even beyond her own epilepsy. She spent years caring for a grandmother with dementia.

"It was the easiest decision I've ever made," she said. "This will be my chance to make a difference."

Dr. Andrew Ko, who performed Hofmann's surgery at Harborview Medical Center in Seattle, stressed that it's important to make sure patients understand the difference between what's needed for therapy and what's optional for research. At Harborview, Ko talks to patients about treatment while a research coordinator discusses the opportunity to participate in studies, he said.

Nall, the California woman, underwent surgery too. But before that, doctors had to discover the spot that was triggering her seizures.

To do that, surgeons often implant arrays of 100 or more sensors on and within a patient's brain, to eavesdrop on its activity and catch the trigger in the act of causing a seizure. Patients being monitored in this way may spend a week or more in a hospital room as doctors wait for seizures to happen.

During that time, patients don't have a lot to do. For neuroscience researchers, a group of people with implanted brain electrodes and plenty of time is a golden opportunity.

"It is rare that you have the opportunity to study the brain in such a detailed way in awake people," says Dr. Joshua Rosenow of Northwestern University.

In some cases, researchers use the implanted electrodes for stimulation. A few years ago, to explore the role of a certain part of the brain in perceiving faces, Dr. Josef Parvizi of Stanford University activated that area in a 41-year-old patient. The man was looking at Parvizi, who was next to his hospital bed, when the stimulation began.

"You just turned into somebody else," the patient told Parvizi. "Your nose got saggy and went to the left. You almost look like somebody I've seen before but somebody different. That was a trip."

Other times, the brain electrodes are used to monitor what happens as patients do specific mental tasks. Patients may sniff odors, do math, sing, read specific words or sentences aloud, listen to music or speech, look at faces on a screen, name objects in line drawings, stick out their tongues, or do other things meant to create specific brain activity. All the while, scientists track what's going on in their brains.

"There is an explosion of studies in this field, because it is immensely important to know the timing of events in the brain, which areas light up first" and which follow, said Parvizi. "And when area A lights up, what does area B do?"

The monitoring of Nall's brain provided data for several papers published in the past couple years. One of her experimental tasks sounds a little strange: During her 2013 hospital stay she was asked to repeat the sentence, "I never said she stole my money" over and over, putting an emphasis on a different word each time. Those changes altered the meaning of the sentence.

Researchers had sought her help in learning how the brain produces and controls speech, perhaps a step toward helping people unable to talk. That goal struck a chord with Nall, of Waterford, who recalled that an uncle's voice was stilled by Lou Gehrig's disease.

Looking back, she said she'd encourage others to take the same step. "It is something you feel good about later," she said. "Let your life be defined by the lives that you change."

Two weeks after Hofmann's surgery, a scar curves from the top of her right ear to her forehead hairline. "So far, so good," she said. "No seizures." Part of her brain is gone, but she doesn't feel anything's missing. In fact, happy memories have surfaced, "things I haven't thought of since I was a girl."

Contributing brain cells to science "makes me so proud and so satisfied," she said. "It makes me feel more connected to the human race."