Pitch Perfect: After successful heart surgery, Dexter dynamo is back to active lifestyle 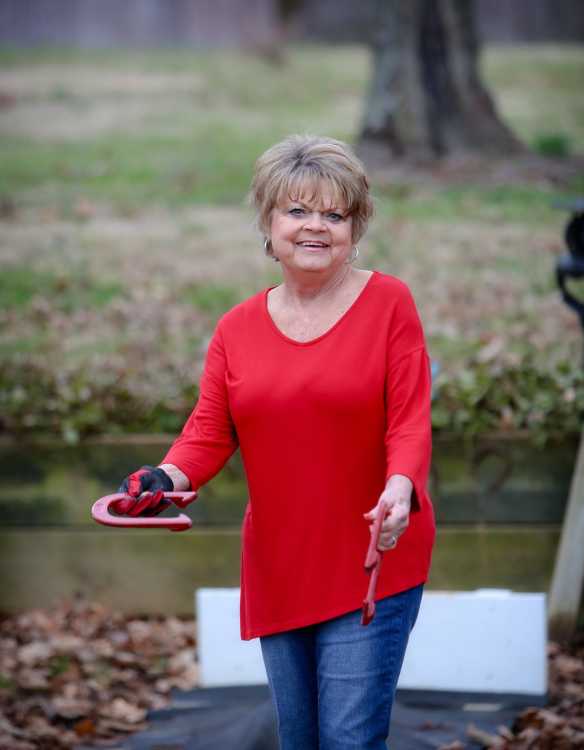 After successful heart surgery, Dexter resident Sheila LeGrand is back to pitching horseshoes with her husband and traveling to tournaments across the country.
Photo by Lyle Whitworth

Sheila LeGrand is not one to sit still for much more than a nanosecond. That's why she was learning to play the wildly popular pickleball. That's also why she broke her wrist.

"I knew I shouldn't run backwards," she admited, patting her cast. Broken wrist -- good news. But more about that later.

Sheila and Ron, her husband of 48 years, operated a communications business in Dexter for 25 years before retiring in 2009. Sheila's flare for design and eye for making useful items beautiful, decorative items is on display at the boutique she currently operates in Dexter. A born treasure hunter, she tells the story of driving through Dexter neighborhoods looking for (and finding) old bicycle wheels that were given new life as seasonal wreaths. Daughters Ronda, of Phoenix, Arizona, and Mendy of Dexter, along with five active grands also keep the LeGrands on the go.

Avid horseshoe players, the LeGrands, who have played in tournaments across the country, were in Phoenix visiting Ronda and her family and pitching in a tournament when Sheila thought she pulled a muscle. Totally understandable for a petite dynamo who pitched almost 500 horseshoes in two days.

"I noticed my neck and shoulder hurt," she said. "I thought it was just weekend warrior syndrome."

"I called, explained that I felt like I really needed to be seen," she said. "Luckily, there was an appointment available that day. When Kim examined me, she wanted to do an EKG. I still insisted it was my shoulder, not my heart."

It Was Her Heart

"I went over to his Dexter clinic after my appointment with Kim. Dr. Arzola did another blood pressure and EKG and, based on the results, suggested I have a stress test," she said.

A few days later, she underwent a stress test at Southeast Health Center of Stoddard County and subsequently followed up with SoutheastHEALTH Board Certified Cardiologist Kenneth Retter, MD, for a cardiac catheterization at Southeast Hospital.

Through this continuum of care that reached across specialties and facilities in SoutheastHEALTH's regional system, the answer was not what Sheila initially expected. The day after Easter in 2018, Sheila underwent coronary bypass surgery performed by Board Certified Southeast Cardiothoracic and Vascular surgeon George Berberian, MD, FACS, at Southeast Hospital.

Dr. Berberian, a highly-skilled and respected surgeon, explains that women frequently do not experience the well-known heart disease warning signs such as chest pain.

"Women often have symptoms such as upper abdominal pain and nausea. The neck pain that Mrs. LeGrand experienced is a potential sign of an acute coronary syndrome (ACS), as is throat and jaw pain." He adds that while women have the protection of estrogen in their younger years, once they reach menopause they catch up pretty quickly with men when it comes to a higher incidence of ACS.

After a successful four-hour surgery performed by Dr. Berberian and his surgery team, Sheila was on the Cardiothoracic Care Unit two days before spending another three days on the Hospital's Surgical Progressive Care Unit.

"Surgeries such as this one used to require a two-week hospital stay," Dr. Berberian explained. "Now our benchmark is to have patients home within four or five days. We have developed pathways to optimize outcomes and reduce hospital stays."

Of Dr. Berberian, Sheila said, "he is so very kind. He talked with us as long as I wanted and answered all of our questions. I think the world of him. He is such a skilled surgeon and he's right there with you, throughout everything."

She shared this snippet: "I like to wear scoop neck tops in the summer, especially when we're pitching. I asked, really just teasing, if he could cut a little bit lower so my scar would not show. And you know what? He did!"

Dr. Berberian, who is also medical director of cardiac rehabilitation, is a strong advocate for cardiac rehab and its benefits.

"We stress after the first post-op visit, which is about two weeks, to get on a pathway with cardiac rehab," he said. "We're fortunate to have cardiac rehab services in Cape Girardeau, Sikeston and Dexter for patients' convenience. Getting on, and staying on, a cardiac rehab program has many proven, long-lasting benefits for patients."

He noted many patients continue coming to cardiac rehab and working at their own pace, even after completing the 36-visit program.

Sheila was happy to heed Dr. Berberian's advice and completed her cardiac rehab at Southeast Health Center of Stoddard County under the watchful eye of Jamie Walls, RN.

"Jamie was just wonderful, so thoughtful," Sheila said. "And the program helped me so much."

Indeed it did. After "graduating" from cardiac rehab on a Thursday, Sheila left the following Saturday for a 10-day trip to Ireland. "I trekked all over Ireland with no problems," she noted.

"I feel great now," Sheila said. And that brings us back to pickleball and Sheila's broken wrist.

"I asked Dr. Arzola, who I follow up with now, if I could exercise," she said. "He said it would be good for my heart. So a group of church ladies from Sacred Heart here in Dexter bought a net and decided to learn to play. I guess the good news is that, without being diagnosed and treated promptly, pickleball might not have been in my future."

Sheila said her experience has "made me, as a woman, to be aware. If you feel different, see about it. I got help before I had a heart attack. I was lucky. Women are always worried about taking care of other people -- kids, husband, family, friends. God gave me warning signs because I have more to do in my life. Women need to be aware of symptoms. I owe my life to Kim Essner for recognizing that something was not right. Remember, don't take your life for granted. You don't know what tomorrow will bring."