From the Business Desk: Wednesday is the chamber's 100th anniversary ... or is it?

A large headline on the front page of the Feb. 6, 1920, Southeast Missourian, in all caps, reads:

Below the headline is a story about a "big meeting" the night before, 100 years ago this Wednesday, at which about a hundred members of the "Girardeau Commercial Organization" gathered for a dinner meeting and "got down to business" after enjoying a "buffet supper of excellent food."

At the top of their agenda that night was changing the name of their organization to the "Cape Girardeau Chamber of Commerce." The Missourian's story also reported the group inducted William Woodrow Martin to be the chamber's first "presiding officer."

So at first blush, it would seem the present day Cape Girardeau Area Chamber of Commerce was born that night, Feb. 5, 1920.

But chamber president John Mehner is perplexed. I spoke to John about this Friday night and he told me the chamber's incorporation papers are dated 1917, three years before the "Girardeau Commercial Organization" met and voted to become the chamber of commerce. "We had a big 100th anniversary celebration in 2017," he said.

However, he said he would reexamine the incorporation documents this week and see whether they referred to the "commercial organization" or the "chamber of commerce." It's possible, he said, the "Girardeau Commercial Organization" was incorporated in 1917 and officially became the "Cape Girardeau Chamber of Commerce" 100 years ago this week.

He and I will try to resolve this mystery by next week.

Regardless, I'd like to wish a happy 100th — or 103rd — anniversary to the Cape Girardeau Area Chamber of Commerce.

Speaking of anniversaries, Jim Limbaugh of Montgomery Bank sent me a note Friday in observance of the anniversary of the opening of the Cape Catfish office, Jan. 31, 2019. (The team's second season is just about four months away.) 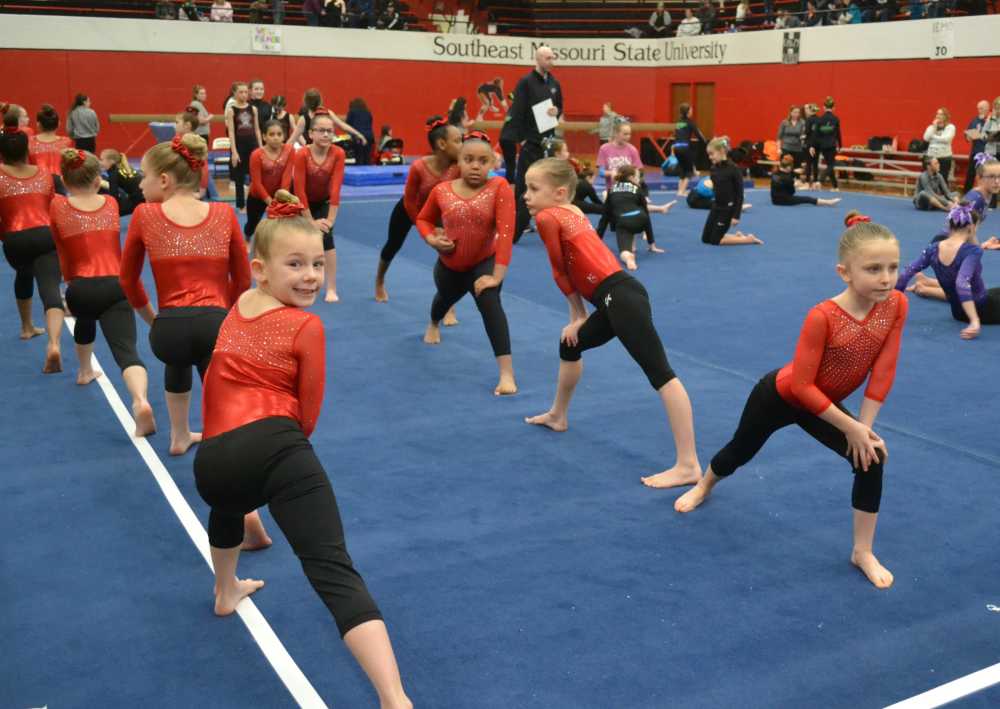 More than 500 young gymnasts from parts of three states came to Cape Girardeau to participate in the SEMO Classic gymnastics meet Saturday and Sunday at Southeast Missouri State University. The SEMO Classic is one example of the many amateur sports competitions that take place in Cape Girardeau every year, bringing hundreds of athletes and family members to the community who, in turn, contribute to the local economy.
Jay Wolz
Order this photo

On a related note, the January/February issue of Sports Destination Management magazine has listed Cape Girardeau among the nation's top destinations for amateur sport tournaments and other athletic events, citing the city's "professional-grade facilities" at the Cape Girardeau SportsPlex and a variety of outdoor sports venues.

Regardless of the season, it seems there's a tournament of one form or another in or near Cape just about every weekend ranging from volleyball, softball and basketball to tennis, golf and gymnastics. Area venues have also hosted bowling, horseshoe and cornhole tournaments. There was even a pickleball tournament at the SportsPlex recently.

In addition to Cape Girardeau's indoor and outdoor sports venues, the magazine noted the resources of the Cape Girardeau Convention and Visitor's Bureau as well as the availability of more than 1,000 hotel rooms and nearly 150 food outlets.

Without a doubt, sport tournaments are big business for Cape. A front desk employee at one local hotel told me the other day about a softball tournament coming to town in late April, and even now, with the tournament almost three months away, she said every hotel in town is sold out that weekend.

News that Chili's is coming to Cape Girardeau has certainly created a buzz. Within two hours after I broke the news Thursday afternoon on semissourian.com and posted it on my Facebook page, my post was shared nearly a thousand times. (And who knows how many times the shared post was shared?)

We track the number of page views each Missourian story receives on semissourian.com, and for the month of January, our news about Chili's was the most read story of the month with almost twice as many page views as the second most-read article.

Chili's, it looks like you have a lot of hungry fans here!