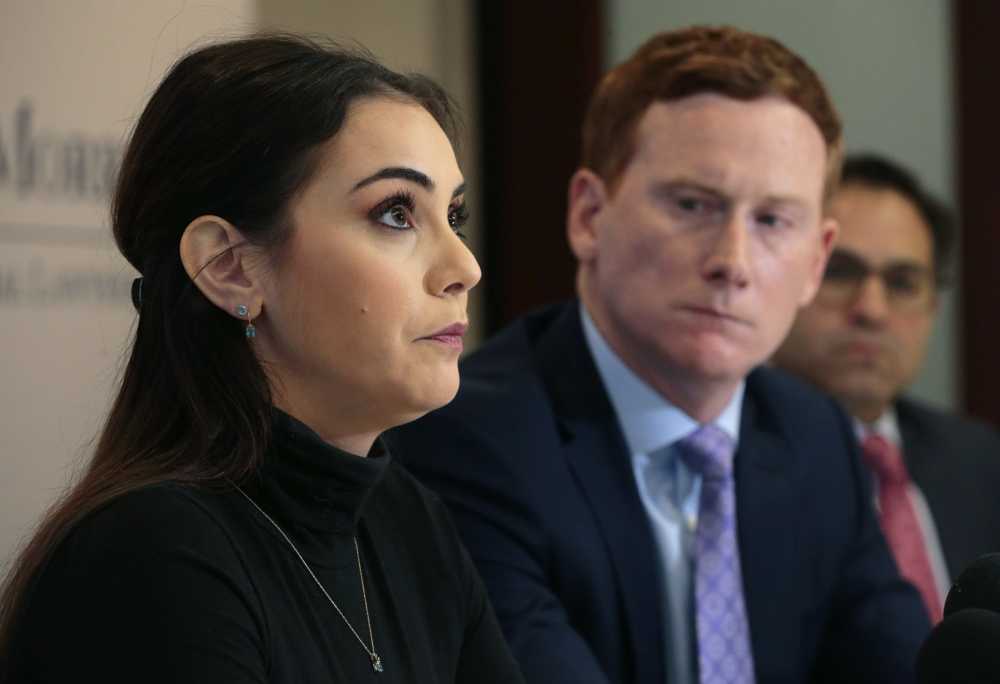 Cristen Giangarra speaks to reporters Thursday about the night in June she says she was raped by a Lyft driver in St. Louis. Attorney Michael Gallagher is at center.
Robert Cohen ~ St. Louis Post-Dispatch via AP

ST. LOUIS -- A woman who says she was raped by a Lyft driver in St. Louis has filed a lawsuit accusing the ride-hailing company of prioritizing profits over passenger safety.

Cristen Giangarra's lawsuit, filed Wednesday, is the latest of several filed by women across the country who have claimed they were sexually assaulted by Lyft drivers. Giangarra, a 30-year-old registered nurse, is listed only as "Jane Doe" in the lawsuit but she identified herself during a news conference Thursday.

Giangarra said she was assaulted in June by 53-year-old Larry Donnell Ward of St. Peters, Missouri. Ward was charged with first-degree rape and kidnapping in December after DNA testing was completed. Lyft banned him for life. Both Ward and Lyft are named in the lawsuit.

Giangarra said she had been out drinking and contacted Lyft for a ride home. She said she acted responsibly by not drinking and driving "and ultimately I was punished for this decision."

A probable-cause statement in December said Ward turned off his ride-hailing location software, deviated from the route to the woman's requested destination and took her instead to a secluded street. A rape kit was tested and the results matched Ward's DNA, according to the statement.

"This was a vicious attack on an unsuspecting and innocent young woman who trusted Lyft to have screened its drivers to ensure her safety," Giangarra's attorney, Michael Gallagher of Chicago, said in a statement.

Ward's attorney, Daniel Juengel, said Ward denies the allegations. Juengel said the lawsuit "shows that this is a case about this woman trying to get money."

Lyft spokeswoman Dana Davis said in a statement the company launched 15 new features last year aimed at protecting riders and drivers, "including in-app emergency assistance, continuous criminal background monitoring of all of our drivers and mandatory feedback for rides rated less than four stars to ensure we are tracking any level of problematic behavior by drivers."

"Our work on safety is never done, and we will continue to invest in new features, policies and protocols to ensure Lyft is the safest form of transportation for our riders and drivers," Davis said.

Lyft operates in 656 cities in the U.S. and Canada and was valued at $24 billion in its initial public offering last year, the lawsuit said.

"Lyft's phenomenal growth is due in large part to lax hiring and security screening processes along with an evasion of regulations that make it easy for individuals to become Lyft drivers," the lawsuit stated.