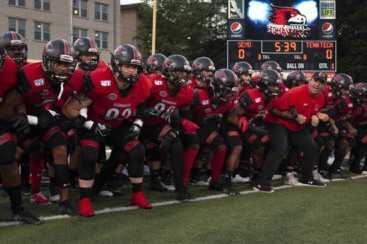 The Southeast Missouri State football team, with coach Tom Matukewicz in the front row, prepare to run across the field before the start of its win against Tennessee Tech earlier this season at Houck Stadium in Cape Girardeau.
Jacob Wiegand ~ Southeast Missourian

Southeast Missouri State University's football team is one win away from securing at least a share of the Ohio Valley Conference championship title and the Redhawks second consecutive appearance in the Football Championship Series playoffs.

The No. 13-ranked Redhawks play conference rival Murray State on Saturday at Houck Stadium. Kickoff is at 1 p.m. The Racers (4-7) have not faired well in the conference this year, winning only two of seven games. But that means nothing -- especially in a rivalry game with each school wanting to come out on top for bragging rights.

Coach Tom Matukewicz has done a tremendous job in his six years in Cape Girardeau. Along with building a winning program, he's been a positive influence off the field in the lives of his players and in the community. Sports editor Tom Davis wrote about Matukewicz in a story that appeared in Tuesday's Southeast Missourian. If you missed it, be sure to check it out online.

Coach Tuke, as he's known, didn't have an easy path to becoming a college football coach. But there were people who had a positive influence on his life, and now he's trying to pass along that legacy.

It's been fun the last two seasons watching the Redhawks become a conference contender. There's a new energy around the program. That's good for the university and the region.

We encourage students, alumni and others from the community to show their support and fill the stands at Saturday's rivalry game.