A Fourth of July secret for next year: Best place to watch fireworks 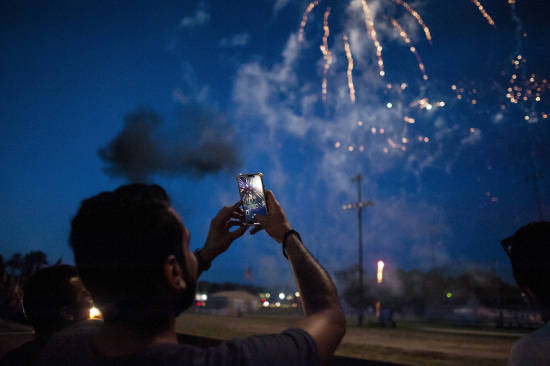 This year the fireworks at Arena Park launched with a boom and two explosions of fire, sending a heat wave into the crowd and black mushroom clouds into the night. The crowd, surprised by the hot wind, gasped -- and one of the best fireworks shows in Cape Girardeau's history was underway. Rockets soared, then floated and burst. They whirled, whistled and glimmered -- non-stop for nearly 20 minutes. In fact, they shot so fast and relentlessly, that the oohs and ahs were drowned by the cascade of sparkling explosions, leaving the crowd breathless and amazed.

If you missed it, you missed a great show: America's birthday, written large upon a cloudy sky.

Certainly, there were other dazzling displays in the area. And, some friends of mine who were staying at the Drury Plaza described the view from atop the new hotel, where they watched the glittery illuminations above Jackson to Cape to neighborhoods all around, where families set off their own rockets. But I wouldn't have traded the perspective from the Arena grandstands, as close as could be without being part of the crew of men setting the Cape fireworks off.

Having lived and worked in Boston, Washington D.C., San Francisco and New York City, I've seen some amazing shows. Maybe those were longer -- and broader, dominating more of the horizon. But they can be too much, too, that it wears you out. At the Arena, you're right there, beneath it, and the show is the perfect length, enough to celebrate our nation's birthday without becoming a too-expensive spectacle divorced from it.

For several years, the city did not have a fireworks show. Then it was rekindled by the patriotic efforts of a local Vietnam Veterans group, led by Rodger Brown, who raised funds throughout the year to make it happen. That group should be proud of what it sustained. Since then, sponsors have been instrumental. This year, besides the city, they included River Radio, the Southeast Missourian and contributions from Shivelbine's and rustmedia.

Staples of Cape Girardeau's celebration are a performance by the Municipal Band, the Southeast Missourian Spirit of America Award, remarks from the mayor, and interviews by Faune Riggin, all available via radio to the thousands who park their cars to take in the show. And yet, to me, nothing beats being in the grandstand itself, experiencing the event with the others there, not only listening but watching the Muny band play, and pondering the words of heroes who've won the Spirit of America Award. This year, the recipient was Blair Moran from Sikeston, a Vietnam War veteran, who has dedicated much of his life to honoring those who serve our country, many who never returned.

Fireworks have been a part of America's history, ever since its inception. On July 2, 1776, as delegates from 12 colonies voted in favor of independence (New York would follow a few days later), John Adams (the future president) wrote his wife Abigail:

"The Second Day of July 1776, will be the most memorable Epocha, in the History of America. I am apt to believe that it will be celebrated, by succeeding Generations, as the great anniversary Festival...It ought to be solemnized with Pomp and Parade, with Shews, Games, Sports, Guns, Bells, Bonfires and Illuminations from one End of this Continent to the other from this Time forward forever more."

Adams was off by two days. But his prediction was otherwise right.

Next year, if you want to feel the heat of the fireballs, in conjunction with the closest view of the rockets' glow, try inside the park itself. Try inside the grandstand, where the parks department even provides the kids small American flags (as long as supplies last). There, you'll also be inspired by fellow citizens, playing long-loved American marches and hymns, or speaking from their heart about service. Such is what helped make America great in the first place. It is an experience not soon forgotten.