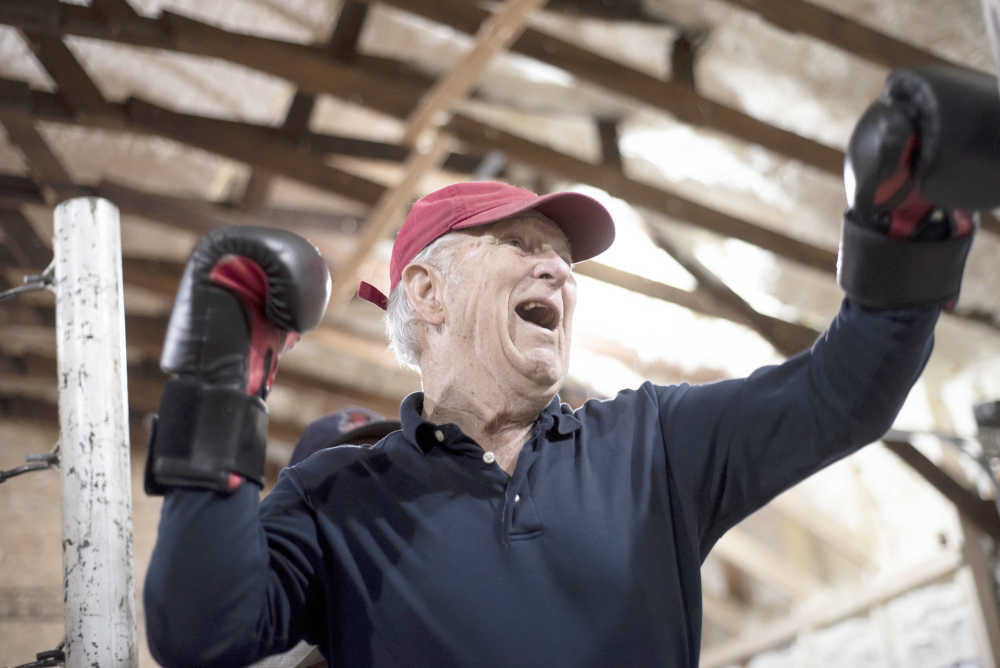 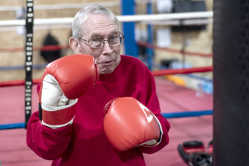 Murray Sullivan holds up his boxing gloves for a photo during the Parkinson's program at the Christian Boxing Academy Friday, March 22, 2019, in Cape Girardeau.
Kassi Jackson ~ semissourian.com
Order this photo

When Tim Estes of Pocahontas, Missouri, first began attending the Christian Boxing Academy and Learning Center’s Parkinson’s Disease ministry in Cape Girardeau, he couldn’t get out of a chair. Six weeks later, he walks around doing group exercises and working out at the speed bag, making jokes with the other boxers while encouraging them in their own workouts. 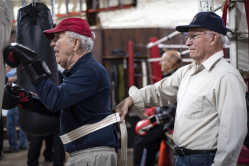 Fred Ferrell, left, works on a boxing exercise while being supported by volunteer Gene Brunkhorst, right, during the Parkinson's program at the Christian Boxing Academy Friday, March 22, 2019, in Cape Girardeau.
KASSI JACKSON ~ kjackson@semissourian.com
Order this photo

It’s a drastic change Estes is grateful for; he is enthusiastic about the ways the program has helped transform his life with Parkinson’s. 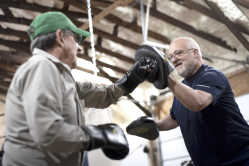 “Most of these guys are [in their] 70s and 80s. They inspire me,” Estes says. “It’s a wonderful program. It’s got me closer to God, it’s just helped me in everything, all the way around.”

It’s a sentiment echoed by each of the other 14 people with Parkinson’s working out in the gym. The atmosphere is jovial and communal; it is clear the people there care about each other, pushing each other to make progress.

It’s the vision of Danny Rees, who founded the Christian Boxing Academy in 2013 to provide a place of faith for students while teaching them how to box. Formerly housed at The Salvation Army and then at The Bridge Church, Rees and his wife, Colleen Rees, bought the ministry’s current building at 155 S. Park Ave. in Cape Girardeau in December 2018. With the help of funds from LaCroix United Methodist Church in Cape Girardeau, they have turned it into a gym.

This is the first year the ministry has functioned as a not-for-profit, called Christian Boxing Academy and Learning Center. The Parkinson’s program was added in November 2018. 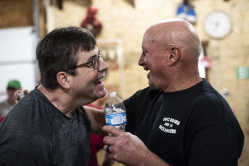 Rees first thought of starting a program especially for people with Parkinson’s Disease around a year ago when he saw a segment on CBS News about the ways boxing training can deflect or reverse the effects of Parkinson’s. When he told his friend about the idea, his friend said he had another friend whose father had Parkinson’s; he might be willing to try boxing.

That man, Steve Douglas, is from East Prairie, Missouri. He came in to the ministry to try boxing in October 2018 and has been coming back three times a week ever since, seeing significant results.

Douglas says the camaraderie and being around people with the same issues has given him hope. He says it changes his “attitude and perspective. It’s also an asset to be around people who’ve had [Parkinson’s Disease]. You see something that worked for them that you might try; you think it’s not hopeless.”

With an estimated 930,000 people in the United States who will be living with Parkinson’s Disease by 2020, programs like the Christian Boxing Academy and Learning Center’s are needed to provide physically, mentally and spiritually for people with the disease. The Christian Boxing Academy’s program is free to the public, supported through donations from local businesses and individuals. Students from Southeast Missouri State University’s Department of Kinesiology, Nutrition & Recreation also volunteer with the program.

The workout looks like this: the boxers and volunteers circle up to hear about each other’s’ lives and pray together. Then, for the first 30 minutes, they remain in that circle, participating in group exercises such as lunges, leg lifts and passing a ball. After this, the 1950s and ‘60s music is cranked up, and boxers are free to move from station to station throughout the gym, completing exercises with boxing mitts, chairs and the double-end bag for three minutes at a time. Volunteers circulate the room, checking in with each boxer and encouraging them in how far they’ve come, while pushing them to do even better.

“We’ve become a family rather quickly, and so we get to hang out and we get to share in each other’s joys. And really here, it’s all joy,” Rees says. “Even if they’re hurting or don’t feel good that day, it’s still joy involved in that.”

This mental aspect is a key component of the program: Ash Sampath, a third-year medical student at the University of Missouri School of Medicine in Columbia, Missouri, is conducting a study with the Christian Boxing Academy and Learning Center’s Parkinson’s Disease ministry. The study is one of the first in the medical field to evaluate the effect of goal-oriented exercise on the non-motor functions of Parkinson’s Disease. Sampath and neurologists from the University of Missouri School of Medicine are examining if the program helps stop the progression of Parkinson’s Disease. Patient progress is recorded through various metrics and validated clinical surveys. Sampath will be presenting his research to the medical world at the Midwest Clinical and Translational Meeting in Chicago.

“The potential is astronomical,” Sampath says of the program. “Everyone knows that non-motor functions of Parkinson’s Disease are associated with a lower quality of life; however, few have studied ways to diminish them.”

Sampath says they hope they are creating a framework others can use in small towns to help patients with Parkinson’s Disease.

“Apart from boxing, we have created a support network and given these patients a renewed sense of normalcy,” he says. “This is a big-city program in a small town.”

Gene Garrison of Jackson, one of the boxers who regularly attends the program, has had Parkinson’s Disease for 11 years. For him, it began with flicks of his thumb that at first were few and “far between,” and continued to become more regular over time. As soon as a neurologist diagnosed him with Parkinson’s, he says he went to work utilizing physical workouts to fight back.

Eleven years later, after four to five weeks of attending the Christian Boxing Academy and Learning Center’s program, he says other people have noticed he stands more erect and has improved his walk. As a former high school coach and administrator, Garrison supplements these workouts with his own regiment on the off-days.

His advice to anyone facing Parkinson’s?

“Do not lay down, do not quit. Fight, fight, fight,” he says. “I started out very early — anything I noticed that it did to me, I did it back. I found a way to fight back with it. When I shake, my hand wanted to curl. I grabbed a hold of the sink and refused to let it curl. And when I walked, I practiced walking.”

One way he recommends fighting back is to get involved in a program like the one at the Christian Boxing Academy and Learning Center. This, he says, will provide not only a way to fight back physically, but also the camaraderie needed to fight back mentally.

“I will not give in to [Parkinson’s Disease], no matter what it does,” Garrison says.

Interested in attending or volunteering with the Christian Boxing Academy’s Parkinson’s Health Ministry?

The group is open to the public and meets at 155 S. Park Ave. in Cape Girardeau on Mondays, Wednesdays and Fridays from 9 to 10:45 a.m. Donations to the ministry are also gratefully accepted. For more information or to donate, connect with the Christian Boxing Academy on Facebook or email drrees1960@yahoo.com.