Trump's visit offers us all a chance to show hospitality 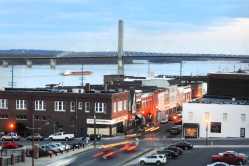 Have you heard about the woman, delayed at the airport, who slipped into a Starbucks for coffee and a package of cookies? Sitting down in a row of seats outside her gate to enjoy her drink and sweets, she pulled a book from her purse and began reading. After a while, a man sitting next to her opened the package of cookies next to her purse and ate one. The woman was astounded. "How dare he?" she thought. She took her own cookie and went back to her book and latte.

To her surprise and disgust, the man took a second cookie out of the package, and she grabbed the next. When the man separated the last cookie from the package and offered it to her, finally, she became visibly irate, grabbed her bag, swore at him in the worst of ways and stormed off.

It wasn't until her flight was called and she opened her purse to retrieve her ticket that she discovered a package of cookies inside. It was then she realized it was her and not the stranger who had been rude. He had shared his own cookies with her, and her treatment of him? Unknowing, uncaring, ill-informed.

Maybe you've heard a different version of this story? I heard it once, and this version is my recollection, slightly updated. Whether the basis is true or not I don't know, but I thought about it recently, because of how so many people have been treating others, especially in politics.

The story reminds me about the importance of humility. Sometimes what we believe fervently ... is not true. And we should always be careful about ascribing the worst motivations to those we turn into our enemies.

To me, it's also a story about failure to communicate. Both people in this story could have made the other more comfortable.

One of my favorite podcasts is "Hidden Brain" on NPR. Hosted by social scientist Shankar Vedamtam, it seeks to use science and storytelling to reveal "the unconscious patterns that drive human behavior and the biases that shape our choices."

A recent program titled "Red Brain, Blue Brain" dove into research indicating political views, at least in part, are influenced by biology. Interviewed for the program, John Hibbing, a political scientist at the University of Nebraska-Lincoln, talked about the primary influence of environment and upbringing, but pointed out: "We would look at brain scan results, and we could be incredibly accurate knowing whether [the subject] was liberal or conservative, just on the basis of that." He found that, on average, "about 30 or 40 percent of political attitudes come from genetics."

To Hibbing, the finding is important, because if people realize that we're not all wired the same, it "may help us to have more empathy for people who disagree with us."

Next week we vote.

It's a shame (though nothing new) that the candidates themselves -- and so much of politics and the media -- thrive on spurious and sensationalized attacks. After the vote, I hope we can lower the temperature and move on, and that includes moving past Russia, Mueller, Brett Kavanaugh, the Clintons and so much more. Such a transition did not happen in 2016 -- instead, so much became about delegitimizing a president or his unpresidential punchbacks -- and today's high-stress, polarized environment is a result.

I'm willing to share my cookies with you. Or is that yours I just took? Either way, we're in this together. Vote. Encourage your friends to vote. And then, let's move on, shutting out the message from those who would tell us to be uncivil.

Update: I wrote the above column last week before the shooting at Tree of Life Synagogue. For a summer, I studied in Squirrel Hill a few blocks from the temple. The area was one of my favorite places to live: tree-lined and wholesome. The shopping areas were quaint and full of families. My heart and prayers are with everyone affected -- and with all Jews, everywhere.

At church here in Cape Girardeau this weekend, a woman asked me, "How did we become so tribal?"

She told me, "I might disagree with your columns at times, but I would never swear at you about them."

We talked about how social media has led to many people living in their own echo chambers. And we agreed the best place to help is with ourselves first, reaching out, being civil.

President Donald Trump is scheduled to come to Cape Girardeau next week. Let me be very clear, so no misunderstandings emerge (indeed, I was called some colorful names last time I tried this). Pro-Trump attendees should welcome those who oppose the president, including any protestors. We are all Americans, free to express our opinions. Don't get in their faces. Celebrate our democracy and the historic nature of a president's visit by enjoying the moment, kindly and without malice, even if some would seek to diminish you for it. Anti-Trump forces: please protest. But do it, understanding that others support Trump for many good reasons, and not because of the "isms." You should be respected (as should they), but realize that disruption, versus peaceful protest, is ultimately counterproductive.

For both "sides," those in your group who act uncivil betray your cause (and that includes the President). Those who act with violence, betray humanity.

Let's show everyone visiting kindness and true hospitality, especially those we disagree with. Remember, we're in this together, and long after the visitors are gone, we'll still be here.

View 31 comments or respond
Community discussion is important, and we encourage you to participate as a reader and commenter. Click here to see our Guidelines. We also encourage registered users to let us know if they see something inappropriate on our site. You can do that by clicking "Report Comment" below. Our goal is to create a place for robust and civil discourse about our community, state and nation.