United We Fight! United We Win!

The following story has been submitted by a user of semissourian.com. To submit your own story to the site, click here.
User-submitted story by Kristin Funderburk 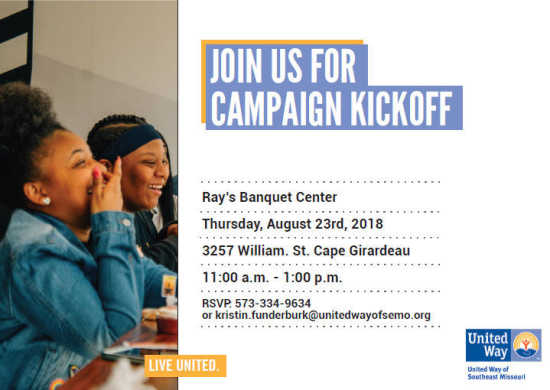 United Way of Southeast Missouri invites community members to join their fight for health, education, and financial stability for everyone by attending their 2018 campaign Kickoff. The informative luncheon will be held August 23rd from 11:00 am – 1:00 pm. at Ray’s Banquet Center in Cape Girardeau.

The two-hour luncheon will include data and progress reports on the impact being made on Southeast Missouri’s most pressing issues through United Way’s network of 24 partners. It also will be the second year for three of these organizations to pitch ‘mini-grant’ proposals to the audience.

Last year, over 150 individuals raised $2,500 in less than 30 minutes to support new programs. The result was three new initiatives spearheaded by Voices for Children/CASA, Boys and Girls Clubs of Southeast Missouri, and Boy Scouts. Collectively, roughly 200 area youth were able to benefit from the new programs supported by these mini-grants.

At this year’s kickoff, supporters will hear from representatives of The Safe House for Women, Boy Scouts partnered with the Boys and Girls Clubs of Southeast Missouri, and First Call for Help with the Community Caring Council. Together these groups will demonstrate what a big difference $3,000 can make to families and individuals in Southeast Missouri.

Elizabeth Shelton, Executive Director of United Way of Southeast Missouri, explains: “Kickoff officially launches our annual community drive, and we are eager to share results, upcoming goals, and enable our donors to hear directly from the agencies they support through United Way. The mini-grants demonstrate the collective power of our network and were a big hit with last year’s crowd.”

United Way of Southeast Missouri supports 24 agencies and 30 programs throughout their footprint, which includes Cape Girardeau, Jackson, Scott City, and Perry and Bollinger Counties. Due to corporate investors and grants, .99 of every $1 donated by individuals is invested back into these communities.