A worldwide effort to save boys in trouble 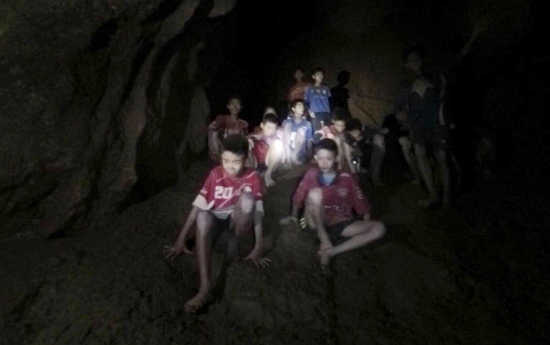 Three cheers for the diving teams who helped save the Thai soccer boys from the flooded caves! Led by two Brits considered the "A Team" for dive rescue in the world, the group was heavily international. On Sunday, when the evacuations began, several sources indicated there were roughly 90 divers involved, 50 from overseas. Of the specific group who brought the first of the boys out, 13 of the 18 were international.

British divers played a key role, along with Americans, Australians, Chinese and, of course, Thai. On the second day of the rescue, 100 people were involved in the mission, speeding up the process. Yesterday, 19 divers ushered out the final group, their coach, a doctor and three divers who'd stayed with the boys once found.

By the time this column prints, we are likely to know more about these diving heroes. But maybe not everything: early reporting indicated that discussion of some divers was restricted because they are members of elite search and rescue forces.

Thai divers were instrumental, and volunteer Saman Gunan, a former member of the elite Thai Navy SEAL unit, lost his life placing air tanks along the evacuation route. He fell unconscious returning to the cave entrance and could not be revived. His heroism will be honored by the King of Thailand -- and in prayers around the world.

According to several news websites, roughly a thousand people were involved in the rescue operation in total, including divers, military personnel, doctors and volunteers. Engineers played a vital role, among other things constructing a low dam at the mouth of the cave that helped to keep water levels down, according to the New York Times.

After 18 days, the boys may be out of the cave, but now the focus turns to their health. Lung infections from bat guana, rat urine and other infectious material lurking in the caves must be protected against. At least two of the boys have been diagnosed with pneumonia. How food, after so many days without it, is reintroduced is important. Who knows what psychological challenges may emerge. But the images and messages already sent by the boys have been inspirational. The divers described them as "incredibly strong kids." For each of them it was critical, during the actual dive out, to keep calm and not panic, which could have been fatal to them and others. It was not an easy ask for kids, most of whom did not know how to swim. But they persevered and survived.

Their tenacity within the cave for more than two weeks and on the harrowing trip out offers messages to us all.

For one: The boys and their coach fled rising waters deep into a cave with barely a snack and little drinking water. For more than a week, they were trapped in darkness, with oxygen depleting, drinking only water that dripped from above, unknowing if they would ever be found. In the end, they spent 18 days in mainly darkness. No matter how difficult the obstacles, never give up. Hope in even the darkest places is vital to life. So always, keep hope.

Adventure is wonderful and can be incredibly bonding: carelessness can be devastating. Be mindful of signs warning about danger. And, in a hat tip to the movie Princess Bride: Never enter a cave that floods at the beginning of monsoon season.

The fact the boys trained hard as soccer players and were in good shape helped them survive. Their coach, a former Buddhist monk, taught them to meditate, and it helped quiet fears and conserve energy. Sports training and meditation fuel the body, especially in times of high stress. For your health: Exercise and meditate.

Science, expertise and experience are important. The boys and their coach would not have been found in time -- or saved -- without the expertise of those involved in the rescue. Hope and good wishes are helpful, but it took experienced divers, world-class engineers and technology to get them out. All acted calmly, trying one option after another until meeting success. When at risk of paralysis, solve the problems immediately in front of you. And study, never stop learning.

Prayer is powerful. The boys, their families and people all around the world prayed for a happy conclusion to the boys' nightmare. Their prayers were answered. Pray, every day, and more often in times of duress.

Finally, in a world of turmoil, conflict and international intrigue, the mission highlighted the effectiveness of international collaboration: diverse people from different cultures working together for a common purpose. So, respect others, work together, and success is more likely. Be part of a team, not just a critic.

Along with the safety of the boys, these are lessons to celebrate.