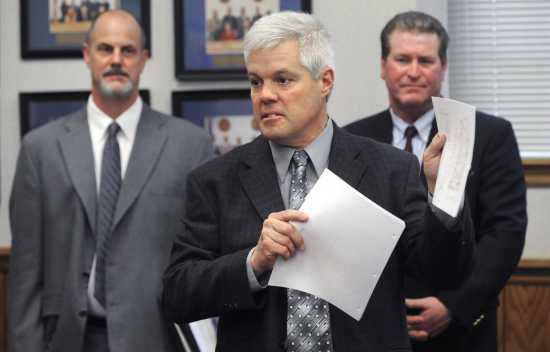 Some of the finest buildings in Southeast Missouri were built by Penzel Construction. Last week, its president and CEO, mindful of potential conflicts of interest with upcoming opportunities, resigned from the Jackson Board of Aldermen. It was a class act by a class guy, saving the city from the complications of him stepping out of discussions or abstaining on a regular basis. That's just who Phil Penzel is: a businessman and public servant with the best of intentions. For more than 12 years, he's served the city of Jackson. His quiet, competent and steady service will be missed.

Jackson Mayor Dwain Hahs told this newspaper: "I really appreciate Phil's service for the city. I hate to lose him, but I understand what he's doing with his business -- that's good, too."

Currently, Penzel Construction is a design-build finalist for the new Cape Girardeau County Justice Center. I'm not familiar with the details of the project, outside of what I've read in the Southeast Missourian, and won't endorse one building firm over another. But when Penzel Construction is a finalist, you can be sure you have an excellent option. A decision a different way usually means the other firm has made a compelling case tied to the specific project.

Meanwhile, the City of Jackson has issued a Request for Qualifications (RFQ) for a new police station. Penzel will no doubt be a respondent.

Some recent municipal buildings that Penzel has built include: the Cape Girardeau SportsPlex, Fire Station No. 4 in Cape, Cape Splash and the original and enhanced Osage Center. Nearly 15 years ago, I had the chance to work with Phil and Penzel Construction with the rehabilitation of the Southeast Missourian building. It was a big and complicated project, involving an historic, national landmark originally built in 1924 and a modern media business that operates 24/7. Penzel and his team worked with us, dealt without fuss with unexpected surprises due to the age of the building, coordinated with our ongoing work schedule for noise and with a planned isolation of focus that allowed us to move departments around the building temporarily without missing a beat, hit deadlines, and the result was spectacular.

If Cape and Jackson are growing, and they are -- among the fastest growing towns in the state -- it is because of people like Penzel, who have a regional perspective on development.

Penzel told Southeast Missourian reporter Marybeth Niederkorn about the importance of collaboration between Jackson and other government entities:

"I've worked with three mayors from both Cape and Jackson in my time as alderman," Penzel said. "It's really important to me, and I'm glad to see we as a city are back on track to having a progressive relationship with the city of Cape and Cape Girardeau County."

Penzel told Niederkorn that the forward-thinking, regional mindset is extremely beneficial to all parties involved, and will lead to making Jackson a better place for people to live and work.

"I think everyone should work together and look at things that will help the region, not just their little corner of the world," Penzel said.

Here's wishing good luck to Penzel as he focuses on his business. And thanks to him for his service to Jackson. The whole region is better off because of his efforts.