The dirty downside of downtown development 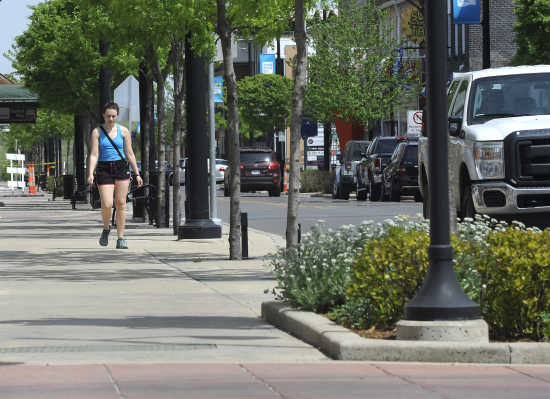 A pedestrian walks along the Broadway streetscape Tuesday, May 1, 2018 in Cape Girardeau.
Fred Lynch ~ Southeast Missourian
Order this photo

At first, perhaps displaying a bit of paranoia and conspiracy thinking on my part, I thought the culprit was someone protesting the newspaper. Each week, for several weeks, just outside the Southeast Missourian's front entrance: a giant pile of dog poop.

Not wanting to trouble anyone else, I'd grab a plastic bag, a bucket, paper towels, and clean it up. A few days later: another pile.

For quite a while strolls along the river have been like navigating a treacherous minefield. But for some reason, I didn't make the connection about Broadway until walking recently and stepping over and around pile after pile up and down the sidewalk in front of or near more than a dozen fine, local establishments. Seriously, in front of a chocolate shop? Who can be protesting chocolate?

It was at that point, because I'm somewhat slow at times, I realized it wasn't some news-protesting dog owner fattening his dog for the trip downtown just to have it relieve itself in front of the Missourian. (How that would actually work, I had no idea, but I know there are pheromone sprays that get a dog a streamin'). The new profusion along Broadway was much more likely, and simply, a result of better weather, and more people enjoying strolls with man's best friend in an area that is increasingly more interesting and charming to walk. The problem, and it's a problem, could be viewed: the dirty downside of dynamic, downtown development.

Because walking loses a bit of its charm when eyes have to be focused more on avoiding hazards than looking into shop windows or maintaining eye contact with a beautiful companion (yes, my wife). Let alone, if you step into the hazard, and it squishes into the tread of your sneaker, and curbs and twigs just don't get the shoe clean: Something needs to be done!

A city ordinance leveling fines for those who don't pick up after their pet is one pathway. Many cities do that. In fact, in 1996, the Dogs Fouling (of Land) Act was passed by the Parliament of the United Kingdom making it a "criminal offence" not just in England and Wales but across the commonwealth "if a dog defecates at any time on designated land and a person who is in charge of the dog at that time fails to remove the faeces from the land forthwith." An exception was made for "registered blind dog owners". The law was subsequently updated in 2005. Fines start around $100 U.S. dollars, and can rise to more than $1,000. Today, you can also find laws in England (and elsewhere) that levy heavy fines for dog walkers who don't carry a minimum of (usually three) plastic bags for scooping. (Which means, do the math, a walker better start out with more than three!)

Such laws have reduced "dog fouling" precipitously, according to numerous British newspapers. Many cities in the United States that enacted similar laws experienced the same results. The trick is getting attention, so that culture is changed and enforcement is no longer needed. Meanwhile, elsewhere in the world, other tactics have been implemented.

In Brunette, Spain, according to a 2013 story in the New York Times, the city activated a "remote control specimen (very lifelike) that was used around town to get people's attention. It followed. It banged into shoes. And it generally drew laughs. There was some improvement in behavior. But it did not last long."

So, the following year, the mayor deputized a small army of volunteers to observe transgressors, who would then "bag it, box it and [mail] it back to its owners."

"It's your dog, it's your dog poop," the mayor said. "We are just returning it to you." The problem dropped by 70 percent.

Meanwhile, in Mexico City, according to a 2012 CNN report, an Internet company experimented in 10 city parks by offering free wifi-service to those who "put their dogs' droppings in a special container which measured the weight of the poop. The container, which doubled as a router, then emitted a set number of minutes of free Wi-Fi for every pound of feces it collected."

According to CNN, the service was called, "Poo Wi-Fi."

Returning to England: another campaign, which gained notoriety after trending on Twitter, involved a controversial poster campaign that depicted a toddler appearing to eat dog poo -- with face and mouth covered in muck alongside the slogan: "Children will put anything in their mouths."

According to a story in the Huffington Post, "a second picture of dog mess is also shown next to a warning for dog owners to pick up their pet's excrement or face a ÂŁ1,000 fine."

A spokewoman said: "We think it is shocking if people leave their dog excrement and there are children who do get covered in it and that is shocking. We are out to shock people with this."

In Taiwan, according to the same Huffington Post story, authorities in one major city tried a carrot instead of the stick. Their novel way of solving the problem was to exchange a lottery ticket for a pet's droppings. "Those with lottery tickets had a chance of winning the top prize: a gold ingot worth $2,200."

In Cape Girardeau, section 6-13 of the City Code is titled, "Defecation on public or private property prohibited." The rule reads: "It shall be unlawful for any person owning or in control of any animal to permit or allow such animal to defecate upon any public property or private property of another unless such person shall remove immediately all feces so deposited by such animal."

So, the rule exists here, though it's rarely if ever cited, and the penalty (if one were ever to be imposed) is up to the municipal judge. According to Sgt. Rick Schmidt of the Cape Girardeau Police Department, "I don't want to say never, but I can't remember a ticket ever being written. I've definitely talked to people about the issue, but it usually applies to a neighbor, who takes offense about 'someone who left a present' on their lawn and it's led to some conflict. The infraction is smaller than a misdemeanor."

Personally, I think police and city staff have much more important matters to attend to. Better, I think, is to implement the mantra about terrorism. "If you see something, say something." Instead of reporting to the police (or FBI), as you'd do with terrorism concerns though, why not just make it clear to the offender: "Hey friend, can you not just clean that up? It's really not courteous to other people! It's also not healthy. Gorgeous dog, by the way, and, clearly, well-fed!"

As I said, "See something, say something."

Now, on to my new dilemma, I've got to figure out the meaning behind the full beer bottle that was left in front of the Missourian building this week.

Jon K. Rust is publisher of the Southeast Missourian. He, his wife and kids love to walk downtown Cape.