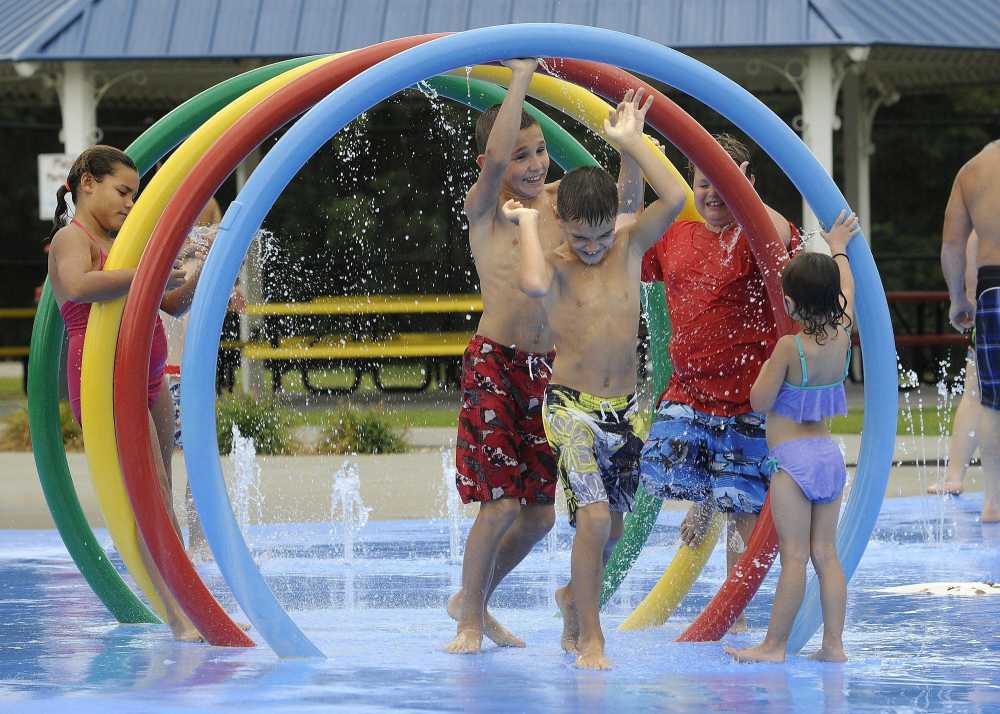 Youngsters have fun on the spray pad Sept. 5, 2016, on the last day of the season at Cape Splash.
Fred Lynch

Stormwater is a major concern in Cape Girardeau, and if citizens had not supported city leaders in the past with tax dollars, then significant areas of town would continue to flood during heavy rains. When I was growing up, several feet of floodwater was not abnormal in even the town's busiest areas -- around the Town Plaza; along Broadway; at West End and Independence -- which are no longer inundated during heavy storms. Still, flash flooding persists, and more work is necessary.

In less than two weeks, citizens will have the opportunity to extend a soon-to-expire tax (thus, it would not be a new tax) that includes additional stormwater projects, including maintenance. Support for this part of the tax vote should be a no-brainer. Flash flooding can be devastating, as many local families and businesses know.

It is the other part of the tax vote, regarding Parks and Recreation, which has drawn some concerns in calls to my office. According to the mayor and city manager, if voters extend the 3/8th cent sales tax for parks and stormwater improvements, approximately $27 million will go to parks over the next 15 years; about $10 million for stormwater infrastructure projects. Almost $21 million would go toward maintenance and operations associated with both parks and stormwater.

City parks have many supporters and a top notch team taking care of them. From small neighborhood parks to the Sportsplex and Cape Splash, the park system is a big part of the quality of life in Cape Girardeau -- and more and more, a driver of economic activity, which multiplies to the benefit of Cape's citizens. In a recent interview, city manager Scott Meyer said, "It used to be people came here just to shop. Now they come for sporting events and conferences, and shop while they're here."

It's sales tax from those shopping dollars, which are turned around to fund many city services: 60 percent paid for by non-residents.

Still, I've been asked: Is there a point where too much focus (and too many funds) are on parks to the detriment of other city priorities, namely: addressing the root causes of violent crime?

It's important to ask -- at all times -- about how the city prioritizes taxpayer money, and crime is an issue in Cape. But to me, parks and recreation is a central benefit to those who live here, and increasingly, a driver of economic activity. The city budget is not a binary question. Personally, I'm more than happy to pay sales tax to benefit the entire community through parks improvements, and my wife is even more adamant. She knows how valuable it is to take your children to public parks; to get sunlight, fresh air and exercise; and meet new people in a common space. Some of our very good family friends, with children the same age as our own, we met in parks or city leagues.

One concern I do have is not about the city's plan, it's that the public fully understand that one of the park projects, a new "aquatic center," is being handled differently from past initiatives. In prior votes, the city specifically identified projects to be completed -- and for most of this plan, it's done the same. Except for the aquatic center. The aquatic center is more aspirational with the tax plan allocating roughly $6 million to the project, which on its own will build only a limited indoor facility. Partners will be necessary to create the kind of structure the ballot initiative's promoters envision as being the first class, in-door replacement to the 40-year-old Central bubble.

To its credit, the mayor and city officials are making that point clear, and see the plan as a way of limiting the city's obligations while encouraging partnership. And, promoters of the initiative include the following phrase in their materials: "The scope and specifics of an eventual new aquatics facility will take into account various factors, including additional funding partners, operating budget, the ability to generate revenue, site alternatives, and other factors."

If the tax vote passes, it will be interesting to watch how this part of the plan develops. The mayor and city manager have identified that the matter will go to a committee to invite and evaluate proposals from potential partners similar to how the Sportsplex was developed -- with the Cape School system already expressing interest and locked into three of the six spots on the recommending committee. The initial vision was that the pool would be located at Jefferson School. More recently, other locations have entered into the discussion. No ones knows for sure where the facility will be located in the end, but as parks director Julia Thompson-Jones told the Southeast Missourian editorial board, the location and scope of the plan will be thoroughly vetted to the best use of tax dollars and economic impact for the benefit of citizens.

I encourage you to study the ballot initiative yourself and make your own decision. Promoters of the vote have created the website: YesApril3rd.com.

The city established a proven track record with PRS1, passed in 2008. As assistant city public works director Stan Polivick said in the same meeting with the Missourian editorial board, "We delivered what we said we'd do. We delivered it on time and on budget. And we even did more than was promised."

There is no question: the state of Cape's parks and stormwater control is a world better than what existed prior to the vote in 2008. A "yes" vote on PRS2 is good for Cape Girardeau.

Jon K. Rust is publisher of the Southeast Missourian and a member of its editorial board.