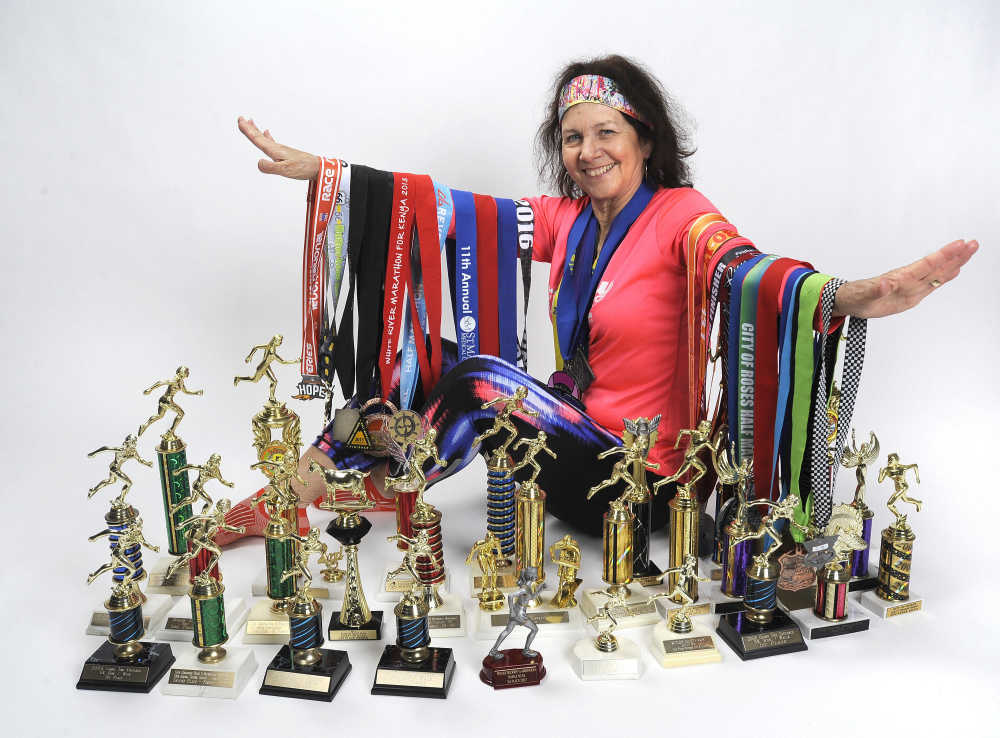 Linda Null poses with some of her medals and trophies.
FRED LYNCH ~ flynch@semissourian.com
Order this photo

Linda Null’s goal is to run a half marathon in every state.

She’s over halfway there.

In the past 15 years, Null, a retired teacher originally from Dudley, Missouri, has run a total of 59 half marathons, two 23Ks, two 25Ks and two 50Ks. She has run half-marathons in 29 states, and she’s training for a full marathon in June.

This is even more remarkable knowing just 15 years ago, Null could hardly have a conversation without losing her breath. 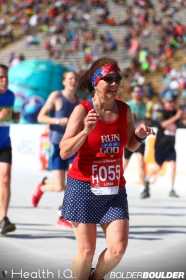 Linda Null runs in one of her many races.
Submitted photo

“Life is a Marathon”

Null didn’t start running until she was 50 years old, and when she did, she had significant lung damage from an autoimmune disease called Sarcoidosis. It had taken doctors three years to correctly diagnose her, and by that point the disease had progressed to borderline stages three and four. She was sleeping at night sitting up in a chair, her students often had to finish her sentences for her at school because of her coughing, and she felt like a 50-pound weight was on her chest at all times.

That’s when Null started looking for alternative options to medicine. One day, she went outside and started walking quickly and praying. She compares this experience with Paul’s conversion on the road to Damascus. 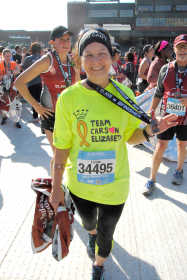 “That day I was basically pleading, ‘God, help me,’” Null says. “I just kept talking, talking, begging God, ‘Please, remove this burden off of my chest, I just want to take a deep breath. I want to know what it feels like to breathe deeply.’ … All of a sudden, I noticed that my airways seemed to open up … and I kind of had just a brief little feeling of, ‘Oh my gosh, I can breathe.’”

Null began walking regularly and saw steady improvements in her breathing abilities. She gradually began “baby jogging,” as she calls it, noting people probably could have walked faster. Then she signed up for a 5K.

Null’s doctors were skeptical, but didn’t try to stop her.

“When I first started running and told them that’s what I was going to do, you could’ve heard a pin drop,” she says.

At her first 5K, Null had no idea how races worked. After explaining the rules to her and hearing about her condition, the director of the race told Null, seriously, not to die while running. Then, the race began.

As she ran, though, Null learned about the goodness of people: runners who already had crossed the finish line came back to run the rest of the race with her.

After this experience, Null began signing up for every 5K she found. Her goal? Not to finish last.

“Teaching Is a Noble Calling”

Null taught math at Twin Rivers Jr. High School for 30 years, and now works as a mathematics consultant for Southeast Missouri State University, creating professional development workshops for math and science teacher graduates. She uses her passions for teaching and running by being an instructor for Cape Girardeau’s Running for God ministry, a supportive couch in a 5K program that uses running metaphors to talk about faith.

Teaching, Null says, is all about finding ways to intrinsically motivate people.

“Intrinsic motivation comes from having some success,” Null says. “Then you start to believe in yourself, like, ‘I can do this. And I’m not going to let anybody tell me I can’t.’”

This determination is a code Null lives by. Last summer, she rode the entire 237 mile Katy Trail on a bicycle. Her strategy? To visualize herself riding the bike, and then to put forth the effort and not quit.

To overcome struggles while she runs, Null keeps a picture of herself participating in the St. Jude’s half marathon close by.

“It looks like I’m struggling,” she said about herself in the photo. It reminds her: “You may see me struggle, but you will never see me quit.”

Null, grateful for the way running has healed her, uses her propensity for the sport to give back to others. At the St. Jude’s Memphis Half Marathon, she has been a part of Team Carson Elizabeth — one of the top five teams who have raised money in the U.S. — for the past two years. She even participated in a 5K walk for the American Cancer Society while on a cruise ship during a recent vacation.

“I’m running to be healthy, not just physically, but also mentally and spiritually,” Null says. “My outlook on life is better ... So, I’m going to keep running for as long as I can.”

Null says her illness and healing through running has made her grateful. She is a believer in the power of determination and hard work.

“It’s a culture in our society — if it doesn’t come easy, it’s not worth it,” she says. “If you want to reap the reward, you’ve got to be willing to put forth the effort.”

Null cites a half marathon at Yellowstone National Park, which she ran with three of her friends, as the most beautiful race she’s run. During it, she and her friends decided they weren’t going to worry about their race times, and instead paused to take photos along the way.

This experience embodies the way Null lives her life.

“My mantra is, enjoy the journey,” she says. “The journey is the reward. It’s not just crossing the finish line. It’s what happened between the start and the finish.”