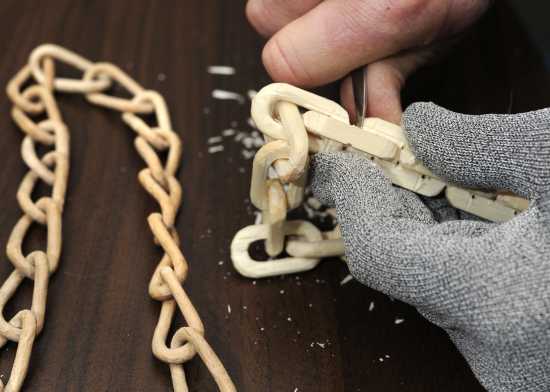 Mike Cochran wears a Kevlar glove as he carves a basswood chain with the River Valley Carvers.
Fred Lynch
Order this photo

In a day and age when mass-production has all but done away with the quality handmade items of the past, one group is determined to preserve the notion that something made by hand will always hold more value than something factory-made. The River Valley Carvers Club of Cape Girardeau was started in 1993 by a group of individuals who wanted to form a community of people with a shared interest in the traditional art of woodcarving. 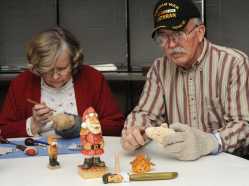 "Dave [Ledure] wanted to start making clocks, so we got him some tools and started taking classes. I didn't want him to have all the fun, so I took the classes with him. Eventually we wanted to find others with the same interests, so we put an ad in the paper and had our first meeting," Sharon Ledure says.

Sharon and Dave, the founding members of the carvers club, remember being surprised by how many others in the area either carved or were interested in learning.

"Of course membership has fluctuated over the years -- at one point we had about 40 members and now we are around 20 -- but the interest in carving has remained active," Sharon says.

The members span at least a decade in age and are always interested in introducing new people to the joys of carving.

The club consists of a tight-knit group of individuals whose monthly meetings, taking place the first Thursday of each month at the Cape Girardeau Elks Lodge, are conducted with much laughter and friendly joshing. The atmosphere is light-hearted, with business conducted as briefly as possible to make time for "show-and-tell" and general "B.S.," as Dave phrases it.

Every month the club has a Saturday workshop where the group works on projects together. Projects range from Christmas ornaments and angels to Celtic crosses and ducks carved from old golf clubs. Workshops are usually held at a member's home. Sometimes they are guided by a carving pattern found in Woodcarving Illustrated, a magazine most members subscribe to, while other times it's a design from a member's own collection of ideas. 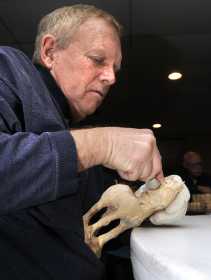 Denny Overy of the River Valley Carvers works on a basswood horse caricature.

During workshops, each attendee has the option to purchase the rough-out of the design. Some members prefer to bring a piece they are working on and simply enjoy the communal coffee-drinking as flakes fly from each knife, revealing the faces and shapes held captive below the surface of the wood. Each person works at their own rate, seeking advice or help when needed.

Each member has their own story of when they started carving and what keeps them at it. One member, Denny Overy, describes his own experience: "I started in 2003, never having carved before or even thought about doing it. Bought some tools and started my first project, which was a Santa Claus. I did it in one weekend. From there we started on wood burning. I did a beautiful scene; it really surprised me. I had art class in high school, but beyond that, I never really did anything artistic or thought that I could. But what I found through starting to carve is, if it interests you, you can probably do it."

Jimmy Whittaker, another member, indicates he has "probably been carving for about 20 years." His approach to the art is somewhat different, as he reveals, "my favorite thing to carve is just something I pick up from the woods and form into something I've seen. I enjoy nature. I was walking through the woods not too long ago and found a piece of wood -- it had a vine wrapped around it that looks like a snake -- so I will probably carve a snake head on it; bring the details out. I found a piece of drift wood by the river awhile back, and I didn't notice it at first, but I was looking at it the other day and realized, there's an alligator's head there!" 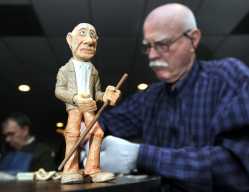 Mike Cochran's caricature of an old man keeps watch as Cochran carves out a basswood chain with the River Valley Carvers.
Fred Lynch
Order this photo

Whittaker's method of finding the object inside the wood and essentially freeing it varies from some of the other members' methods. But this does not concern him. Instead, he glibly quips, "That's why they make different flavored lollipops. Everybody doesn't enjoy the same thing!"

One member, whose carvings many have likely seen, is Kenny Schiwitz, an experienced carver. He says his reason for starting was that he wanted a cigar store Indian, so he simply acquired a large piece of wood and carved one. He is the artist responsible for the famous cigar store Indian at Lambert's Cafe in Sikeston, Missouri.

Even with these accomplishments, he says, "I could never draw, but I have gotten a better eye for picking up details since I started carving."

The time Schiwitz has devoted to carving varies from year to year, but he says, "The past month I've carved at least five out of the seven days."

From the jovial air that surrounds the River Valley Carvers, it's easy to tell they are a laid back group. Dave Ledure emphasizes that this is common among carvers. 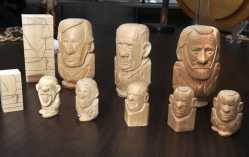 "They are just a willing group; they like to share ideas and teach people. Each class you take, you can take the things you learn and incorporate them into your style," he says, adding that is one of his favorite things about being a member of the carving community.

He goes on to mention that of the hundreds of people he has met throughout the years at carving workshops and shows, only one or two have been hesitant about sharing their skills and secrets.

"If you go to a show and see something interesting that one of the other carvers has done, you can just ask about it and they will usually pick up a piece of wood and show you how they did it," he says. 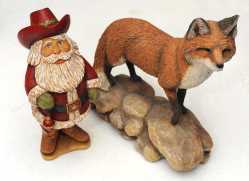 A Santa and red fox were carved by Sharon Ledure with the River Valley Carvers. FRED LYNCH ~ flynch@semissourian.com

Each piece created typically has a unique "flavor," so artists are perfectly willing to teach, knowing that how the skill manifests itself is unique to each person and does not jeopardize their own works' originality.

Investing in an artistic pursuit such as woodcarving could be daunting to some, but Sharon Ledure reassuringly notes that the group gladly caters to new people.

"To do something hand-carved takes a lot of time, but it is a relaxing way to preserve a tradition," she says. "It's been around for thousands of years, just to make things prettier."

Anyone interested in joining the River Valley Carvers can contact Dave or Sharon Ledure at (573) 450-3637. Yearly dues for the River Valley Wood Carvers Club of Cape Girardeau are $8 for an individual or $12 for a family.