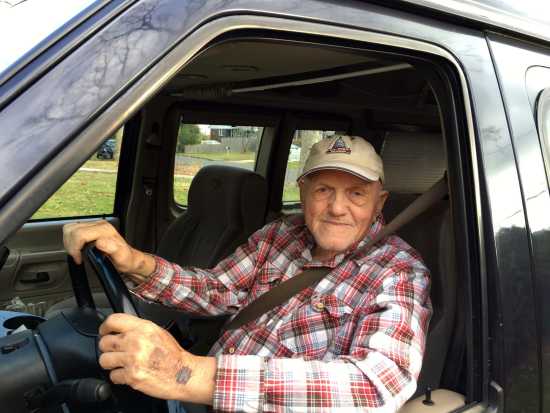 This photo provided by Jerome Minerva shows his father, Joe Minerva, 86, seated in his Ford E150 conversion van, who recently took an AARP driving class in Huntington, New York. The class was very helpful for the elder driver, even for someone who's been driving for almost 70 years. (Jerome Minerva via AP)

DETROIT (AP) -- Joe Minerva has been driving since 1946. He's a skilled and disciplined driver and he's never been in an accident.

So Minerva was surprised how much he learned when he recently took his first-ever driving class.

During the six-hour AARP course at his local senior center, he learned the places in his city where the most accidents occur. He was surprised to find he could be ticketed for holding up traffic, even if he was driving the speed limit. And he was fascinated by the new auto safety technology the instructor described.

"I couldn't believe what I didn't know," says Minerva, 86, a retired machinist from Huntington, New York. "I think young drivers should be required to take that course."

Americans are living -- and driving -- longer than they used to. There are more than 36 million licensed drivers over age 65 in the U.S., up 34 percent from 1999, according to government data. By 2030, as the baby boom generation ages, 70 million Americans will be over 65, and the vast majority of them will have driver's licenses.

Older drivers are less likely than other age groups to be involved in fatal crashes, partly because they drive fewer miles. But when they do crash, they're more likely to die because their bodies are more susceptible to injury. The Insurance Institute for Highway Safety says drivers 70 and older are 3.2 times more likely to die in a crash than drivers ages 35 to 54. 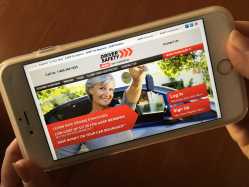 This photo shows the AARP Foundation Driver Safety application on an iPhone in Los Angeles. Safe-driving classes for older drivers can help sharpen skills and extend driving years. AARP's classes, which have been taught since 1979, reach more than 500,000 people each year. They're available online and in person, and they cost around $15 for AARP members. (Damian Dovarganes / AP Photo)

Aging-related physical and mental changes can also hamper older drivers, especially during tricky maneuvers like merging onto a highway. Multiple-vehicle crashes at intersections accounted for 40 percent of fatal crashes for drivers 80 and older in 2013, but only 19 percent for drivers ages 16 to 59, the institute said.

Driving safety classes can help. AARP's classes, which have been taught since 1979, reach more than 500,000 people each year. They're available online and in person, and they cost around $15 for AARP members.

"It helps them remain healthy, independent and confident on the road," says Kyle Rakow, AARP's director of driver safety. Rakow adds many participants say the classes made them change at least one driving behavior, like avoiding night driving or bad weather.

Thirty-four states and the District of Columbia offer insurance discounts for seniors who take the in-person classes. Minerva says his insurance bill will drop by $1,800 over a three-year period as a result of his course.

But some say more is needed. Susan Cohen, who founded Americans for Older Driver Safety after her 20-year-old son was struck and killed by an 83-year-old driver, is developing brochures that could be passed out at senior centers, libraries and other places so seniors don't have to take a class at all. She also wants physicians to give safety information to older drivers, and help them connect with resources, such as occupational therapists who are trained to help drivers.

Some of Cohen's tips for older drivers:

DEVELOP GOOD HABITS: Driving is habitual, so the more good habits you have, the more they're likely to stick with you. Use turn signals, stay a certain distance from the car in front of you and constantly scan the road.

PLAN YOUR TRAVEL: Think about your routes and avoid situations that are uncomfortable, like driving at night or in snow, merging onto a highway or making a left turn.

EXPLORE NEW TECHNOLOGIES: Many new cars have safety aids, including backup cameras, blind-spot monitors and automatic braking to avoid collisions. But older cars can also be fitted with safety technology. Mobileye, for example, makes a camera that you can attach to your windshield and it warns you if you speed, get too close to the car in front or drift out of your lane. The system costs around $800. There are also devices to make driving more comfortable, like larger rearview mirrors.

UNDERSTAND THE RISKS: Learn how aging can affect the body and the brain, and how medications can affect your ability to drive. The National Highway Traffic Safety Administration explains the impact of various ailments on driving, including stroke and arthritis: www.nhtsa.gov/Senior-Drivers.

PLAN A "DRIVING RETIREMENT": Americans are outliving their ability to drive safely by an average of seven to 10 years, according to AAA. Cohen suggests planning a "driving retirement." Learn how to spend a day or two not driving your car, and consider other ways to get you where you need to go. Think about where you want to live if you can no longer drive.