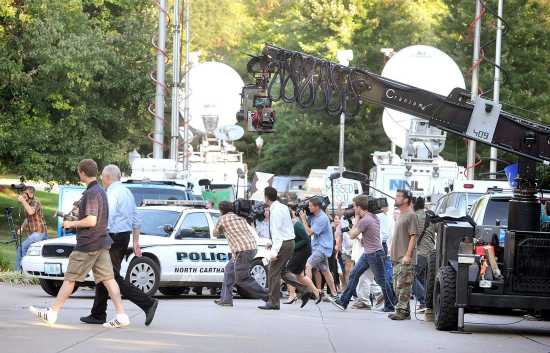 Extras participate in the filming of “Gone Girl” on Oct. 9 in Cape Girardeau. More images are in a gallery at semissourian.com. (Laura Simon)
Order this photo

Editor's note: This story was edited to remove an incorrect reported average estimate of the number of takes the movie might have, according to the producer.

One recent Wednesday afternoon in Cape Girardeau, nearly 140 members of the media and public tried to chase down a North Carthage Police Department cruiser, hoping for a photo, or better yet, a few words from the person inside.

The invasion of a quiet residential neighborhood that looked like a scene from a movie actually was. The people were extras participating in the filming of the 20th Century Fox movie "Gone Girl."

More than a dozen news vans and satellite trucks lined the street leading up a hill to where the main action, led by director David Fincher, took place over and over again for several hours.

While filmmaking is an art, said producer Cean Chaffin as she monitored the set and all that took place there that day, "it's an odd business. A lot of times it's more like doing construction than painting a picture."

The day begins with assembling the movie crew responsible for setting the scene, wardrobe, hair and makeup. They usually begin their work at 6 a.m. just to get to the point late in the day where filming can take place, Chaffin said.

When they are through, the equipment needed for filming, along with all the people, including crew members and their assistants, personal assistants to actors, leading man Ben Affleck, set dressers, camera operators, security guards and the extras take up nearly an entire city block.

During the course of an hour that afternoon, the same scene was shot nearly 20 times. The light had to be perfect, as did the manner in which the actors and the extras moved while the cameras rolled. No words were spoken, apart from the shouts of the "paparazzi."

Chaffin said the movie crews that work with Fincher calculate an average number of takes for each movie when filming is finished. On previous movies, Fincher has averaged about 27 takes per scene. Reports from extras indicate several scenes required more than 30 takes.

The number of takes corresponds to how long the hundreds of local extras used in the film are working each day they are called.

Chuck Martin, executive director of the Cape Girardeau Convention and Visitors Bureau, was cast as a paid extra in the movie separate from the paparazzi-neighborhood scene. Most days on set for extras average 12 hours. Participation in filming meant Martin had to take two vacation days from his job, but he called his stint on set a "once-in-a-lifetime unique experience."

Martin's role in the movie was to act as a volunteer coordinator in a search for the Amy Dunne character. More than 30 times, he shook Affleck's hand for a scene.

"I was probably not the favorite person of the ladies in the room during that," Martin said jokingly. "But the whole experience, it was almost like a treat. Truthfully, I would have paid to have them let me get to do what I got to do."

He said Affleck stayed in character during Martin's entire time as an extra.

"If someone were to ask me what he is like, I really don't know," Martin said. "What I answer is that is a very good actor. He wasn't Ben Affleck. He was Nick in 'Gone Girl.'"

Tom Gustafson, the extras casting coordinator for "Gone Girl," said the typical day of an extra consists of being given a call time, being told what type of clothes to bring, and being "put through the works" by crew members in charge of costumes, makeup and hair. Extras are separated into different groups, placed in scenes and guided through "many, many sets and redos."

The movie crew uses a base, which in the case of Cape Girardeau is a building and a lot at 1515 Independence St., that houses transportation vehicles, rigging and set construction, a staging area for extras, a costume closet and the film's art department.