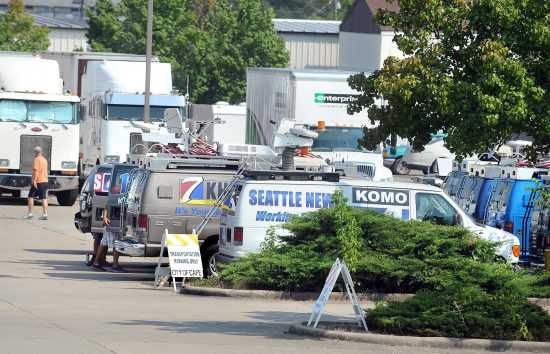 The parking lot next to Tipton Linen and Custom Matting on Independence Street is bustling with trucks, cars, vans and trailers for the 20th Century Fox film “Gone Girl” Monday afternoon. (Laura Simon)
Order this photo

For the next five weeks, about half of the movie "Gone Girl" will be filmed in Cape Girardeau, a producer of the movie told the Southeast Missourian on Tuesday.

Speaking for the first time to media about the Cape Girardeau location, producer Cean Chaffin said several locations inside and outside of Missouri were scouted, starting in April or May.

"As a place to be, [Cape Girardeau] is wonderful. As for filming locations, it's turned out to be exactly what we needed. In fact, we are shooting here more days than we planned on because it's working so well," Chaffin said.

Others actors in the film are Carrie Coon, a Chicago actress known for stage work; Kim Dickens, whose credits include movies such as "The Blind Side" and the remake of "Footloose"; and Patrick Fugit, who played the lead character, a young writer, in "Almost Famous."

The filming could disrupt traffic in various locations where filming will take place outdoors. Dozens of streets throughout the city will be closed or reduced in the next five weeks, according to permit requests. The Southeast Missourian obtained a list of the streets and closure times requested by the movie makers, but it is not publishing specifics at the request of the filming company, which "has a firm rule not to publicize the film as we're making it," Chaffin said. The company does not want to attract large crowds of onlookers. City and economic development officials also requested that the street closures not be released for fear that doing so would damage the city's chances at recruiting future filmmaking. A handful of significant arteries will be affected at some point, including Kingshighway, Sprigg Street and the Bill Emerson Memorial Bridge.

After the filming in Cape Girardeau, the remainder of shooting will be done on stage sets in Los Angeles, Chaffin said. The film will be released sometime in 2014, Chaffin said.

20th Century Fox and New Regency are the producers of the film, which originates from the best-selling novel "Gone Girl" by Kansas City, Mo., native Gillian Flynn. Published in June 2012, the plot centers on the difficult marriage of writers Nick and Amy Dunne and whether Nick killed his wife on their five-year anniversary. The book partly is set in a fictitious town on the Mississippi River called North Carthage, Mo. There is a Missouri town called Carthage in the southwest part of the state, but it doesn't have a river running through it.

"We wanted to see what the author was writing about first. Then we looked at other states, as well, because of cost implications. We looked not only for cost, but for what the writer intended," she said.

Depending on their jobs, movie personnel have been coming to Cape Girardeau since April.

Local people will be hired as extras and some Southeast Missouri State University graduates will work on the production, Chaffin said. Each department hires its own people; some workers also are being recruited from St. Louis.

Cape Girardeau Police Department public information officer Darin Hickey said two patrol cars and "possibly others in the future, have been loaned to the movie production in the possibility that they would need to be used in filming."

Commercial property at Independence Street and West End Boulevard is serving as a staging area for the film, and permit requests for use of public property and city streets have been filed with the city.

View 15 comments or respond
Community discussion is important, and we encourage you to participate as a reader and commenter. Click here to see our Guidelines. We also encourage registered users to let us know if they see something inappropriate on our site. You can do that by clicking "Report Comment" below. Our goal is to create a place for robust and civil discourse about our community, state and nation.