The following story has been submitted by a user of semissourian.com. To submit your own story to the site, click here.
User-submitted story by David DeJonge 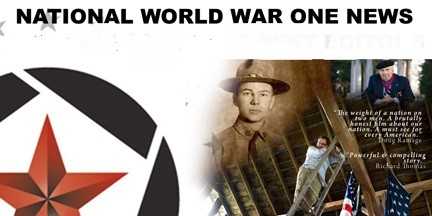 Grand Rapids, Michigan,--April 26, 2013-- A wave of screenings for the film on Frank Buckles the last World War One veteran has been announced for Missouri and Arkansas after an explosive week. The film schedule took off like wildfire after one screening in Iowa on April 15.

Five years ago 108 year old veteran Frank Buckles and David DeJonge visited the abandoned DC War Memorial on the National Mall. DeJonge quickly grabbed his camera and began filming--that filming still has not stopped. "I knew when the last veteran from World War Ones wheel chair could not be rolled to that war monument in DC because his wheels were stuck in the cracked sidewalk this story had to be shared with the entire nation- and we will. America will not forget about 5 million veterans if the midwest can have anything to do with it."

A profound story, this debut documentary for DeJonge tells the story of Buckles life and intimately follows the last 5 years of the World's last veteran of the Western Front of World War One. As the European nations approach a billion dollars to commemorate the Centennial of the Great War America still has no memorial to this war. This is the story of how we got there and the story of a journey of two men two generations apart transform a nation and government to honor five million veterans.

The documentary has been worked on since 2007 and follows the journey of Frank Buckles and DeJonge from Buckles birth in Bethany, Missouri, through the halls of congress advocating for a memorial, press conferences in the oval office and eventually a national and public discussion about his funeral when Buckles died at the age of 110 in 2011. Buckles became and international celebrity visited the Oval Office with President Bush and both President Obama and Vice President Biden attended his funeral at Arlington in 2011. His story inspired the Nation and led to the restoration of a memorial on the National Mall as well as a pending law for a National Memorial to the veterans of the Great War. All of which is covered in this film. DeJonge escorted Buckles and served as his biographer and spokesman for the last five years of his life. The two criss crossed America in an effort to raise awareness for the WWI vets as they both knew Buckles time alive was short.

DeJonge stated: "The film is compelling and at a place to get feedback from America before we release it globally. How often does a Nation get the ability to witness the last years of the last veteran from WWI? We want to share this story and inspire Americans and bring honor to WWI like the rest of the world has done and is doing. The film is nearly 90 minutes of unbelievable American history and is a 100% inspiring true American story. We are looking for feedback and funding to help finish the film. The Midwest is where Frank and I are from and we can get straight answers here. We are looking forward to screening the film all across Missouri and Arkansas during May." Survivor Quest is the non-profit organization creating this film.

Fundraising events and screenings have erupted after disabled Army veteran Steven Long and his Amanda drove 13 hours to watch the film in Iowa and decided the story had to be shared "This film will touch the hearts of everyone." Reviews in Clarion, Iowa reached the front page of the papers then spread across northern Iowa. The town is still talking about it two weeks after the screening.

Within a week DeJonge was invited to the Iowa independent film festival to show the film in October. Iowa resident Mary Goemaat who helped bring the film to Iowa stated: "Our community in Iowa was blown away by the response and other communities will not want to miss the opportunity to see this film that is changing American history."

DeJonge will attend some of the screenings and seating is already so limited in Bethany the Legion is planning on bringing additional seating to accommodate the viewers.

Frank Buckles died on February 27, 2011 at the age of 110. The WWI Memorial Foundation is a non-profit 501c3 organization formed to honor his last desire for a memorial to all veterans from WWI on the National Mall.

When: dates and schedule below

Why: To raise awareness and funds to finish the film and advocate for a National WWI Memorial

How: David DeJonge WWI Memorial President will be speaking and screening his film on the effort for a WWI Memorial in DC and the life of Frank Buckles

Frank was America's last WW1 veteran he lived to be 110. Aside from serving in WWI, Frank was a prisoner for almost 4 years during WW2, sailed the world for over 20 years in the shipping industry, ran a family farm in West Virginia for over 50 years and fought hard during the last years of his life to bring proper honor to the 5 million American soldiers who fought during WWI.

As we approach the centennial to WW1, America has yet to build or establish a "National" memorial to the men and women who fought during WW1.This unique and insightful documentary film, we will travel with Frank to reflect on his early life in rural Missouri and Oklahoma. Frank will share his experiences as he enlisted and served our nation in "The War to End All Wars".

We will experience his life in a Japanese prisoner of war camp, and relive his amazing rescue from death. Finally, we will see how Frank's life has changed over the decades and his rise to fame as America's last witness to the First World War and so many other world events. We hope this film will help inform, educate and entertain everyone who watches.

Our mission is to create compelling educational exhibits and documentaries that motivate students and citizens to learn about the sacrifice and challenge of survivors of life changing events. In the last two years we have educated over 60,000 students about the sacrifice of American Veterans and world history.

Ultimately our 501c3 non-profit strengthens compassion and patriotism by raising citizen's honor, respect, and understanding and provides tangible results with education and art.