By MATTHEW BARAKAT ~ The Associated Press 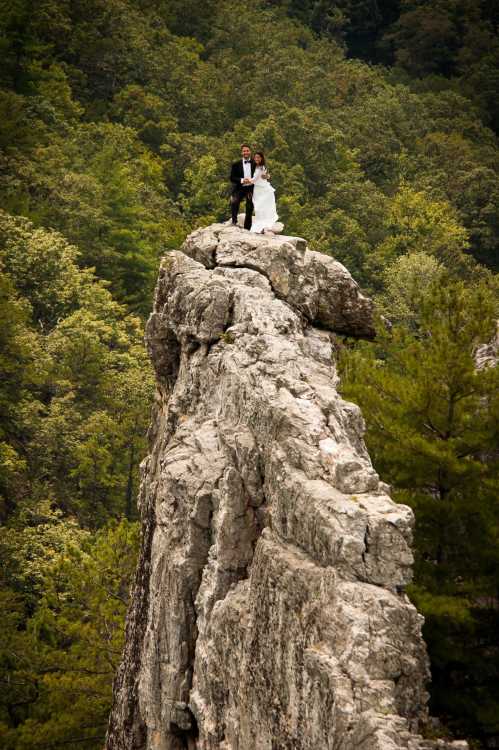 Bob Ewing, 32, right, and Antonie Hodge, 30, both of Arlington, Va., pose at Seneca Rocks in W.Va. The couple made the 900-foot climb in formal wedding attire. (AP Photo/John Ewing, ho)

McLEAN, Va. -- Bob Ewing has gotten a lot of mileage out of his decade-old tuxedo and has even run a couple of marathons in it. Now he's been married in it, after he and his new bride made the 900-foot sheer climb on one of West Virginia's most striking landmarks in full wedding regalia.

Photos of the bride and groom atop the narrow peak of Seneca Rocks in West Virginia have become a hit on the Internet, with more than 500,000 views.

"I had to prove to myself I could do it," said Evangeline Hodge, a novice climber who refused permission to print her age, telling a reporter to come up with a creative adjective for "old." "I did it for all the old people out there."

It was Antonie's idea to get married on the peak. Ewing proposed to her in March as the couple scaled the rocks, and after she said yes, she informed him that she wanted to get married there as well.

The family pitched in. Brother Scott Ewing got himself ordained and performed the ceremony. A second brother, John Ewing, made a separate climb and photographed the ceremony with a rented, high-powered lens. Family and friends who couldn't make the Aug. 11 climb participated in a second ceremony and reception the next day.

Initially, the plan was for immediate family and some close friends to all make the climb, Antonie said. But it became unwieldy, and they had to cut most everyone from the climbing party.

"We didn't have a lot of space. It's a small mountaintop," she said.

But Antonie really wanted her mother to be there with her, and she was sure her mom was in good enough shape to make the climb.

"She wasn't even sore the next day. She was on the dance floor doing the salsa," Antonie said.

Arthur Kearns, owner of the Seneca Rocks Climbing School, said people have occasionally gotten married at the peak, but he's not aware of anyone doing it in formal attire. He planned himself to get married at the peak 19 years ago, "but the minister tapped out ... about 200 feet off the ground," apparently afraid of heights.

Kearns said he understands the appeal, as Seneca is a special place for many people.

"It's probably our favorite place we've ever been," Bob Ewing said. "I think Antonie and I have a special relationship. I'm lucky to have found someone who complements me so well."