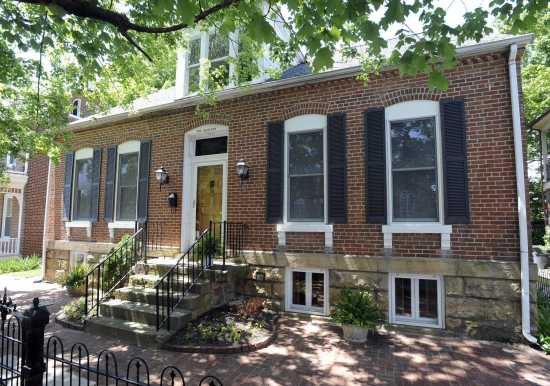 Downtown Cape Girardeau isn't just a destination for people wanting to shop and play. It's also a good place to live, which Old Town Cape hopes to showcase with the third annual Downtown Historic Home and Garden Tour.

Dr. Lisa Bertrand, an Old Town Cape volunteer, has organized the tour each year. Bertrand and her husband are originally from Cape, but moved away for 20 years before coming back to the area.

"While in Texas, we lived in several historic homes," she says. "We renovated one from the condemnation stage. We're interested in historic downtown living."

She points out that it's part of the DREAM Initiative to promote downtown living; the home tour dovetails with that. "One house on the tour sold because (of the tour)," Bertrand says. "It's entertaining for people to go through the homes. It promotes downtown living and attracts people to come downtown."

This year's tour will feature six homes, including the Bertrands'. As the organizer, finding homes to feature is Bertrand's job. "It's kind of word-of-mouth," she says. "I will search out during the year, asking people if they'd be interested (in being on the tour). ... Every year we've been fortunate to have people come forward and volunteer who are happy to showcase their homes."

The Downtown Historic Home and Garden Tour will be from noon to 4 p.m. Saturday, May 12. Tickets are $15 in advance and available at Old Town Cape, Annie Laurie's Antiques, Spanish Street Mercantile and Realty Executives of Cape County. Tickets will be sold at the Bertrand Home, 306 Independence St., for $20 the day of the tour. Homeowners and volunteers will be available to answer questions at each of the homes on the tour.

We asked the homeowners featured on this year's Downtown Historic Home and Garden Tour to give us some insight on their houses.

How long have you lived there? Three years

What attracted you to the house? The house has 5 1/2 foot windows throughout the whole house. Each room has two or more windows and is flooded with natural light! The front porch is my favorite. Even though it overlooks Spanish Street, it is very private and peaceful. There is always a breeze, which makes it so comfortable. You would be surprised as to how quiet the neighborhood is -- very relaxing!

What is an interesting feature of the house? The house was originally a four-bedroom. During the major remodel approximately 20 year ago, it was converted into a two bedroom, the staircase was opened up and a nice landing was incorporated on the second floor. The house features a two-level deck overlooking a large private backyard. From the second floor bedroom, you can see boats traveling down the Mississippi. The view of the Emerson Bridge and the cross on Old St Vincent's Church is great at night.

How long have you lived there? My husband and I bought the home in 2004 (eight years)

What attracted you to the house? We love the downtown area -- the area has so much to offer. We love to take walks downtown, enjoy Tunes at Twilight in the summer, eat and shop in the district. We also love historic homes -- ours has so much charm and character.

What is an interesting feature of the house? We have a wonderful inlaid wood floor in our living and dining room and three original fireplaces. We also have remodeled a back porch into a family room and used a majority of the materials gathered from antique salvage. As an example, wooden church pews were cut to fit as paneling for the walls. We also have a great outdoor entertaining area for family and friends.

The Kage House at 120 Broadway (Fred Lynch)
Order this photo

How long have you lived there? In 2008 several of my friends were visiting Dave Hutson and noticed a "for sale" sign on the building at 120 Broadway. As a kid driving with my parents on Broadway to shop on Main Street, I was always intrigued by two buildings, the second being what I later found out was named the Kage House. A short time later my family and I took procession of the latter of the two. We do not live in the house but use the apartment on the second level as a place to stay when we visit. We also do short-term rentals to out-of-town guests.

What attracted you to the house? I considered it to be a diamond in the rough, and after a few years now it is slowly starting to sparkle. It has not only been a fun hobby for the last three years renovating the building (my wife keeps telling me to find a less expensive hobby) but also has given me a chance to connect with some old friends and have made some great new friends in the process.

What is an interesting feature of the house? The land was once owned by Louis Lorimier, who in turn passed it down to his daughter. At a later date it was sold for 300 gallons of whiskey. This is for sure one of the most intriguing features of the house as well as the methods in which the building was constructed. Living in Europe for 10 years and spending a great deal of time in New Orleans had given us a chance to see many buildings that were hundreds of years old that are still standing tall and will still be there in hundreds more. The Kage House, I am sure, will be one of those still standing long after I am gone, as it possesses some of those same quality traits of construction, built with only brick, stone, timber and steel.

How long have you lived there? Five and half years

What attracted you to the house? We were attracted to the house because of the river view, one floor and the fantastic river room addition.

What is an interesting feature of the house? One special feature is the architectural integrity and the gardens.

How long have you lived there? We purchased the home in 1992. ... We lived there until we bought another home and moved a couple of years ago. The house is currently listed with a real estate agent for sale.

What attracted you to the house? I immediately fell in love with the character of the home.

What is an interesting feature of the house? The home has an interesting history. It was built as a family home originally. At some point, several businesses, in turn, operated out of this property (a time clock business, a certified tenant service business, an insurance business, etc.). During the 1980s, the Mississippi Lumber Co. bought the home and replaced/added a tremendous amount of oak molding, trim and woodwork. The extensive woodwork would be one of the most interesting interior features of the home. The wrought iron fence that extends along the front and wraps partially down the sides of the house is probably one of the most distinct exterior features.

When was your home built? We don't have exact records, but circa 1883. It was built by Frederick W. Pott, who was the owner of the planter's mill on the corner of Main and Independence streets.

How long have you lived there? We've lived here 17 years.

What attracted you to the house? We had renovated another historic house in town. We finished that and wanted a new project and were crazy enough to start this one. It's still ongoing and not finished yet.

What is an interesting feature of the home? Italianate is the style of the house, which was very popular at the time. It has 12-foot ceilings downstairs, 11-foot ceilings upstairs and seven fireplaces, which would have been coal but are now gas. We tried to bring the front floor back to what it would have been. We put in solid cherry doors, built a library, put in plaster ceiling moldings and added columns. There are a lot of architecture details.