Wildfire fight: Who does this?

The following story has been submitted by a user of semissourian.com. To submit your own story to the site, click here.
User-submitted story by AJ Hendershott 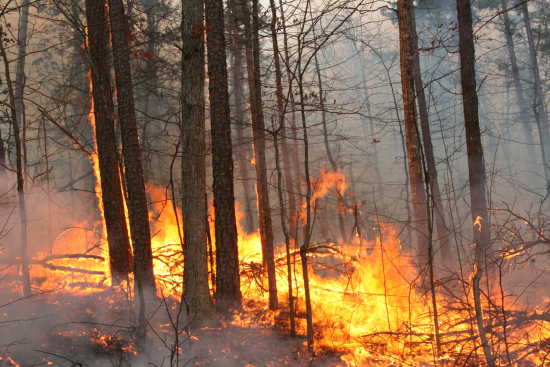 Smoke stung my eyes but it was my choice to be there. My nose was running and my lungs barked out a rebuke to the smoke that replaced the clean air. I shielded my ear from searing heat that radiated steps from my position on the fire line.

I chose to work this wild fire and in my smoke-choked misery I began to wonder, "Who does this?"

Normal people move away from smoke and wisely flee from fire. But not this crew. The people working with me moved closer to the flames. As a member of their team, so did I.

Before we attacked the fire, topographic maps were consulted, plans were devised and assignments made. Personal safety gear and drinking water was distributed. Everyone was properly dressed in protective fire resistant equipment and was fully trained trained to be there.

We began by creating a fire line around the blaze. Work on the fire line was smoky and hot, but necessary to ensure fire didn't cross the line. It was a battle. Strong erratic winds confounded efforts and made progress slow. All the while we choked down smoke and endured heat.

By midday our team was half way around the blaze when the winds shifted with a vengeance. Burning leaves were pushed across the line. Foresters call this a spot fire and the pounced on it immediately. Depending on what they have available, they move the burning material back across the fire line, starve it of fresh fuel by raking around it or smothering it with dirt.

I was both observer and active participant; and as I went about the hurried and focused work of putting out fires, I noticed everyone was calm. They relied on training and experience. At one point the person in charge cried out, "We lost the line."

My training kicked in at the sound of this declaration. Personal safety must take priority. Each person was accounted for and calmly given instructions for safe exit. Within minutes, all fire fighters were safely out of harm's way and a plan was in place for a new fire line. Thirty minutes later the new plan was implemented and we were back to moving forward.

By late afternoon the fire's progress had slowed permitting a rare 10 minute break for all involved. Discussions of child care plans and supper cancelations reminded me that these folks were no strangers to personal imposition. Their plans changed but so did those of their families and friends. I noticed each helmet sported a headlamp. Night duty is a constant possibility for this team. They stay as long as it takes.

We closed the fire line around dark and some of us were let go, while others stayed to monitor the blaze to ensure it did not jump the quickly bulldozed line, rendering all of our efforts worthless. As I drove home in the dark I once again pondered, "Who does this?" Then I approached the Piedmont Forestry office where staff were still working to coordinate efforts. Again, I contemplated the people whose plans changed that day.

I thought about the people who went home smelling like an ash tray and appearing as though they had wallowed in the campfire. Many went home with a carbon monoxide, smoke induced headache as a parting gift for their efforts. All they wanted that evening was a good meal, a hot shower and a comfortable bed. Just like any of us would.

That's when it hit me. The people who do this are just like you and me. They drop their kids off to our schools, shop at our grocery stores, attend our church and play on our softball teams. They're normal everyday people with two exceptions.

First, they are trained and experienced people with the proper equipment. That was something I observed with clarity. They're prepared.

Second, these people have an unwavering commitment to something they believe in. They believe with all sincerity they are saving lives, protecting property and limiting damage to the forest. This commitment fuels them to choke down smoke, to walk toward the flame and to work endless hours without break or meal. They make personal sacrifice to do this and their families are joint heirs in their quest.

Who does this? Normal people with an extraordinary commitment to do something dangerous because it needs to be done. These people are on rural fire departments and work for a host of government agencies. The people I worked with that day were employees of the Missouri Department of Conservation and I have never been more proud to count myself as one of their coworkers.