The following story has been submitted by a user of semissourian.com. To submit your own story to the site, click here.
User-submitted story by Cassie Tangney, MDA Communications Manager 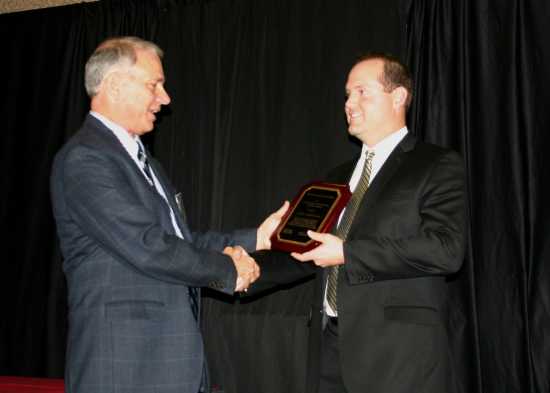 Dr. Ross Bennett, a general dentist in Cape Girardeau, received the Outstanding New Dental Leader Award at the 2011 Missouri Dental Association (MDA) House of Delegates, November 4. He was recognized for his various service and leadership as a 'New Dentist' -- one who has practiced less than 10 years.

After graduating from UMKC, Dr. Bennett quickly began serving organized dentistry as an MDA alternate delegate for Southeast Dental Society in 2008 and 2009, and as a Delegate in 2010 and 2011. He was a member of the General Reference Committee in 2008 and has been a member of the Articles of Agreement and Bylaws Committee since. He currently serves on the MDA Dental Benefits Ad Hoc Committee and the newly established MDA Standing Committee on Dental Workforce. Dr. Bennett is the Southeast Dental Society representative to MODentPAC, is a board member of SEMODentPAC, and in 2012, will attend the ADA Washington Leadership Conference as an Action Team Leader for the MDA. Dr. Bennett also began serving on the MDIS Board of Directors in 2011.

At the local level, Dr. Bennett has served on the Southeast Dental Society Board in various officer positions since 2008: Secretary-Treasurer, Vice President, President-Elect, and lastly was installed as President of the Southeast Dental Society at age 30--the youngest president on record for the Society. Although that presidential term is now complete, he currently serves as the President of the Cape Girardeau Dental Study Club.

When asked about which one of activities would he consider most "near and dear" to him, Dr. Bennett cited the MDA Workforce Committee. "When I think of the issues facing dentistry, workforce will likely be the most important issue during my practice lifetime," he said. "It's an issue that has the potential to impact every dentist and patient throughout our state--which cannot be understated."

Dr. Bennett is a 2007 graduate of the University of Missouri-Kansas City and practices at 1200 North Cape Rock Drive in Cape Girardeau. To find a dentist in your area visit www.modental.org/findadentist.