The following story has been submitted by a user of semissourian.com. To submit your own story to the site, click here.
User-submitted story by Broadway Prescription Shop 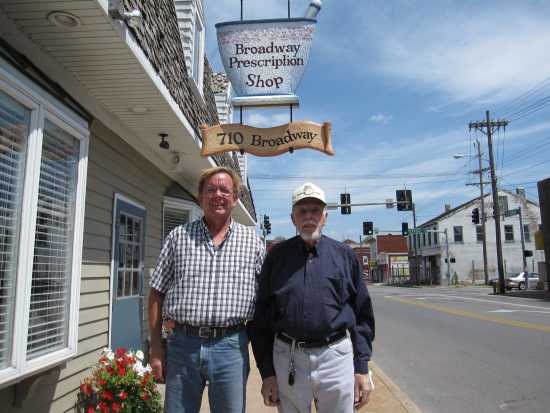 Broadway Prescription Shop’s original wooden sign, which dates back to the 1970s, has been restored to its original glory by local artist Tim Birk Roth.

CAPE GIRARDEAU, MO., Aug. 12, 2011 -- The next time you're driving along Broadway you may notice a local staple has received a facelift.

Broadway Prescription Shop's original wooden sign, which dates back to the 1970s, has been restored to its original glory. After hanging proud for nearly 40 years, the sign was in drastic need of repair.

Tim Birk Roth, local artist and wood carver, is responsible for the signs recent rejuvenation. He restored rotted wood, painted and sealed the sign. According to Roth it is the oldest hanging wooden sign in Cape Girardeau.

"It was an interesting piece to work on," says Roth, "I wanted to respect the signs original integrity and keep it true to Broadway Prescription and downtown."

The sign is a mortar and pestle, a tool used to compound pharmaceuticals and a common pharmacy icon.

Carroll Snead, a pharmacist with Broadway Prescription for 54 years, who recently retired in 2009, originally constructed the sign. Snead carved the sign from western red cedar. It is a replica of a sign that hangs in the New Orleans Pharmacy Museum in Louisiana.

The New Orleans Pharmacy Museum is located in the historic French Quarter, while Broadway Prescription Shop resides in historic downtown Cape Girardeau. Both of which have a rich history as river towns along the Mississippi.