The following story has been submitted by a user of semissourian.com. To submit your own story to the site, click here.
User-submitted story by Steve Robertson 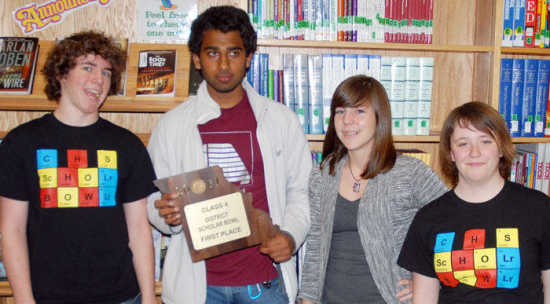 The Cape Central High School Scholar Bowl Team, known locally as the Central Intelligence Agency (CIA), turned their recent first place invitational tournament win into a District Championship at North County on Saturday, defeating the host school in the finals by a score of 310-280. Central went 5-0 for the tournament, defeating Farmington, Jackson, and De Soto in the prelims before knocking off regular nemesis Poplar Bluff in the semifinals, and then handing the North County Raiders their only loss of the day. Owen Hill, Prithvi Rudrappa, Brooke Baugher and Chelsey Caudle, pictured above, competed for the Tigers, who have won five of the last six District 1 championships. Rudrappa and Hill also notched spots on the All-District Team. The Tigers now move forward to the Sectional playoffs at CHS this evening, when the opponent will be Oakville High School.