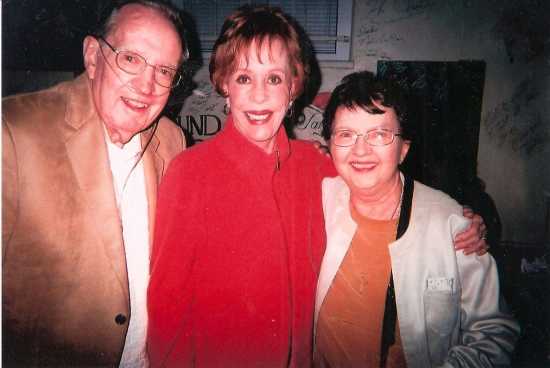 The song, she said, "just popped into my head." It was about the trials of a housewife, dealing with housework, children, and longing to ditch it all "and take a trip around the world," even if only in her imagination. "It took me about 15 minutes to write it," she said.

She sought help from a musician she remembers now only as Joe to get the song printed in sheet music form and copyrighted. He told her that if she ever got to California, that song would be a good one to pitch to Carol Burnett.

It wasn't long before she and Sonny were transferred from Florida, where Sonny worked with the Mercury and Gemini projects at Cape Canaveral, to California. Eventually she got tickets to see the Carol Burnett Show with her son John and her mother-in-law. The day of the show, she didn't feel well and nearly didn't go.

Before they left, she grabbed the sheet music of "Just Talkin" and stuffed it in her purse. Just in case. Noticing that, her son -- a teenager at the time -- admonished, "Mom, don't do anything dumb."

Elbert and Sue Vogelsanger in the audience at a Nov. 24, 1969 production of the Carol Burnett Show watching Burnett perform a song Sue Vogelsanger wrote. (submitted photo)

Sue said she left everything to serendipity. Serendipity provided third row center stage seats. When Carol Burnett opened the show with her usual questions from the audience, Sue's hand shot up and Carol called on her. "I said, 'I wrote a song for you; would you sing it?' Sue recalled.

Carol Burnett not only agreed to sing the song but a few months later -- Nov. 24, 1969 to be exact --she sang the song in an elaborate production number with backup singers and dancers moving around large letters of the alphabet that eventually spelled out Sue's name.

By this time, the Vogelsangers had been transferred again to St. Louis. The show's producers flew them back to California and gave them reserved seats in the audience,. She has a video of that production of Carol Burnett singing the song she wrote for her.

Over the years, the couple have seen Burnett in other productions in other locations, and have been welcomed backstage and greeted as old friends.

Not long ago, Sue and Sonny were chatting with Cape Girardeau bandleader Jerry Ford, who is writing a book called "Dreamers," a story about people who had a dream and realized it. He asked Sue if she'd ever had a dream come true. She mentioned Carol Burnett and "Just Talkin." Ford decided that deserved a chapter in his book, but he needed a comment from Carol Burnett.

Calls he made to her publicity people didn't get him anywhere, so Sue made a call, and in no time at all Carol Burnett had called her back and said of course she'd talk to Ford. "I called Jerry and told him Carol Burnett is going to call you, and he said, 'hang up,'" she said.

Ford got his comments from Carol Burnett, Sue got to talk to her old friend again -- "We see each other maybe every 25 years," she quipped -- and Carol mentioned that she'd be at the Fox Theater in St. Louis Nov. 5. At first, Sue didn't think she could make the trip, but Ford insisted that he drive her and Sonny there and took care of all arrangements.

Backstage at the Fox, Sue and Carol hugged each other and caught up on old times. Carol kissed Sonny, who treasures the photo he has of that, and Sue gave Carol some information about Cape Girardeau and the River Campus, dropping a broad hint that she might someday perform there. "She really perked up when I mentioned Hal Holbrook had been there," Sue said.