The following story has been submitted by a user of semissourian.com. To submit your own story to the site, click here.
User-submitted story by Dan Cole 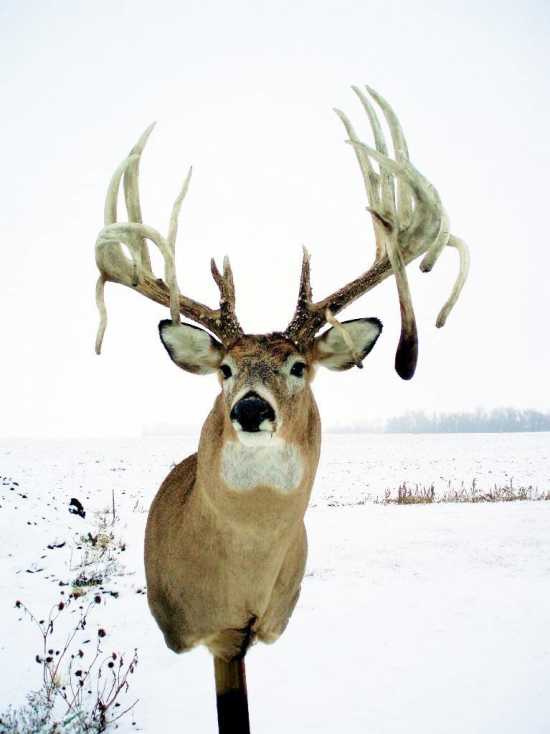 One of the largest whitetails ever known to exist is this buck known as the "Iowa Phantom". Despite knowone ever claiming to have seen him, his existence is proven by the four sets of shed antlers he left behind. This set, which is displayed in the Wild Whitetails exhibit, measure over 280 inches.

Dilworth, MN -- Sept. 7, 2010 - The award winning and ever popular "Wild Whitetails" exhibit is coming to the SEMO Fair in Cape Girardeau, MO, Sept. 11-18, 2010. The exhibit, which has been called the "greatest Whitetail Deer display in North America", is sure to astonish all who see it.

Wild Whitetails owner Dan Cole has put together one of the most unique collections of Whitetail Deer ever assembled for public display. The exhibit features over 20 "wild antlered" deer mounts of unique antler configurations. People can spend a lifetime outdoors and never see these types of antlers. Says Cole; "These deer are unbelievable. Our goal is to give the viewer way more than they expect, and we have consistently proven that we have accomplished that." Cole says he didn't focus on the largest bucks in the world, although the "average" score of the deer on display is an astounding 240 inches, rather he focused on the unique aspects of different antler configurations. "The Whitetail Deer is a very unique animal in that no two sets of antlers are exactly alike. What we have done is take that uniqueness to an extreme level. We will show you what unique and different look like when they are combined with huge!" For example: The exhibit features deer such as the World Record Brow Tine buck, the most massive typical and non typical ever recorded, a buck with eight drop tines, two deer over 30 inches wide, a former State record with four separate antlers, and the largest non typical ever recorded from Canada, just to mention a few. These are the type of deer that Legends are made of. The entire display is shown inside a 38 foot enclosed trailer that is handicap accessible and safe for all ages. Cole wants to point out that the display is not just for hunters, but for anyone who enjoys the outdoors and likes seeing wildlife. "We put allot of thought into building this display and feel it has been done in very good taste. If you like seeing deer, or no matter what your wildlife interests are, we are certain that you'll enjoy the unique beauty that these deer have to offer." Dale Livingood, sales manager for Autumn Legends of Lakeville, MN., had this to say after seeing the Wild Whitetails display for the first time, "I've seen all the big whitetail displays, the Legendary collection, Bass Pro Shops, the Kings collection, just to name a few. If you had a choice between a Ford Escort and a BMW it's pretty obvious what you would choose. I can tell you right now, Wild Whitetails is the BMW of deer displays". The exhibit has won several County and district awards, as well as being a three time State Fair Grand Champion Exhibit award winner. Admission to the exhibit is only "one buck" ($1.00) per person.

Wherever Whitetail Deer roam, there are always a few that are bigger than all the others, those that hold a unique and genuine character that none other share, those that become local legends, and those that are seen as ghosts of the wilderness. It's these deer, the Ghosts and the Legends, which are the epitome of Wild Whitetails.

Wild Whitetails is based out of Dilworth, MN, and is family owned and operated by Dan and Holly Cole. The display is a visual testament to the uniqueness of the Whitetail Deer and the admiration and fixation that mankind has for the antlers of North Americas most popular big game animal.