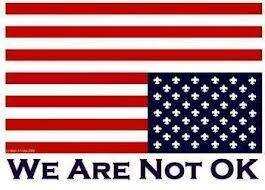 What is it about the holiday season that possesses CONgress, the Prez, and the rest of the Hitler Youth to perform the most dastardly of deeds? Is it because the country has a collective belly full of Figgie pudding, and is too busy playing with their new pacifiers to notice? I doubt it. We never notice things like the NDAA (Christmas 2011), or the Veteran's Disarmament Act (Christmas 2007) regardless of when the criminals in DC enact them.

Perhaps it is because the Old Media is dutifully fulfilling their obligation as mouthpiece of the State by distracting Boobus Americus with the Fiscal Cliff boondoggle. This tall tale has all the necessary ingredients to promote some temporary righteous indignation in a citizenry that is easily amused: the duopoly parties acting like they don't get along, a cocky president assuring his children that "all is well" from a swank hotel in Hawaii, the wealthiest demographic in world history whining about loss of benefits, the military squawking about national security...

What is conveniently never mentioned is the fact that the duopoly parties (including the MO-8th's beloved CONgress Critter -- Jo Ann Emerson) set the table for the ominous Fiscal Cliff by playing another round of the new national pastime, Kick the Can, through the creation of the "Super Congress" in August, 2011 as an act of contrition for raising the debt ceiling again. The Prez signed this legislation with gusto. I guess the road isn't as long and winding as the usual gang of idiots believes it to be.

Anyhow, while you were sleeping, your puppy was crapping. In defiance of the Fourth Amendment, the Senate found time to extend warrantless wiretapping and the interception of electronic communication using the Gift That Keeps on Giving: the Patriot Act, as justification. It is all about priorities.

Details of Sen. Feinstein's upcoming victim disarmament legislation were leaked, and include such popular measures as the registration and fingerprinting of every single gun owner in the Land of the Free.

Not to be outshined, the Prez decided through fiat executive order to give all of our fine public servants in the employ of the Galactic Imperial Empire a pay raise. Merry Christmas one and all!

The 2012 holiday season is shaping up to be one of the most "productive" ever in Washington DC. Here's to hoping that 2013 brings awareness that the State is our common enemy, and that we do something about it.