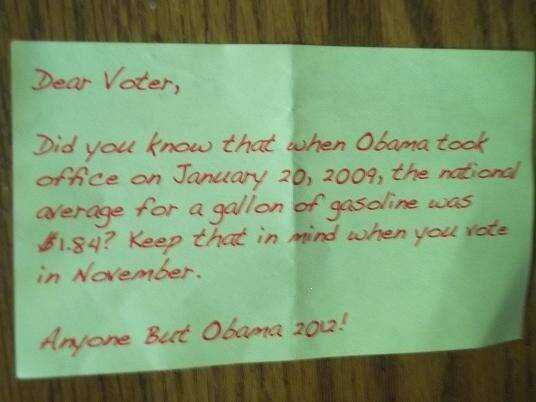 NOTE: I originally composed this in May, and posted it on the Community Bloggers (No Man's Land) of this website on my "Lumpy Nuggets" blog. Today I found another note from "Anyone But Obama 2012", and thought that it would generate more discussion here since I now have an official title. On a side note, the actions of the POTUS can have some effect on the price of gasoline in the area of American military interventionism in the Middle East. Only one candidate for POTUS is opposed to our aggressive foreign policy: Gary Johnson, Libertarian Party. Here is his website... http://www.garyjohnson2012.com/front

I filled up my raggedy old '94 Toyota Pick Up this morning at the local filling station, and noticed a Post-It note on the gas pump which contained a message from "Anyone But Obama 2012!". Although the script of the note was designed to give the appearance of being hand written, it is very obvious that it is a cleverly designed replication of which hundreds are surely appearing on gas pumps in droves around the area.

Besides the fact that is morally wrong to deface private property without the owner's consent, I thought I would respond with a few casual rebuttals to this simplistic piece of propaganda. The content of the "note" is as follows...

Did you know that when Obama took office on January 20, 2009, the national average for a gallon of gasoline was $1.84? Keep that in mind when you vote in November.

The note assumes that one man has control over a product that is supplied via a system of location, extraction, refining, delivery, and purchase. This product is in high demand by billions of individuals across the globe, and its availability is not only determined by that high demand, but also by its scarcity, laws, and the product's multiple uses. To assume that one man, albeit a very powerful man, can simply control the price of a product, especially a product as complex as gasoline, is the very definition of ignorance. If this one man can control the price of gasoline, why would he stop at $3.60 / gallon? Why wouldn't his goal be $10 / gallon, or $100 / gallon? Since this one man is a politician, why wouldn't he lower the price to $.25 / gallon in order to guarantee his bid for re-election?

The note also implies that the current high price of gasoline is a negative development that is the responsibility of this one man. If all the bad things that happened are the result of this one all powerful man, wouldn't it be safe to assume that all the good things that have happened since his tenure started are also because of him? On January 20, 2009, I drove the raggedy old '94 Toyota Pick Up as my daily transportation. I now drive a fully loaded 2003 Buick Park Avenue. Should I also keep this in mind when I vote in November?

In regards to the catch phrase "Anybody But Obama 2012!"; if I agree with that principle is it really more desirable to have anybody but Barack Obama elected President of the United States? According to Wikipedia, 172 people have filed to run for president in 2012, including actress Rosanne Barr and an inmate in Texas who was convicted for extortion named Keith Russell Judd. Would Rosanne Barr or Keith Russell Judd make a better president than Barack Obama?

I could continue, but the point is that what passes for political discourse in this country is in actuality propaganda campaigns based on fear, superstition, lies, and outright stupidity. Instead of focusing on one issue in which the POTUS has little to no control over, why not focus on the powers that he has abused, such as invading sovereign nations and a blatant disregard for the rule of law?

If the voters would focus on these issues, the "Anyone" that the vandal prefers over Obama, Mitt Romney, wouldn't have a leg to stand on either.